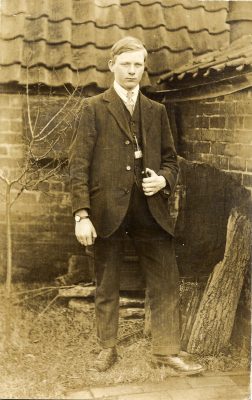 Photograph of a young man most probably shortly before he enlisted in the First World War.
From Janet Dammes' family archive.

This may be Charles Box, who fought in the Army Service Corps in the First World War, though the young man looks to young for this to be correct. More probably, it is Victor Box, who was born in 1900 and would have been too young to enlist until near the end of the First World War.

In a cottage garden