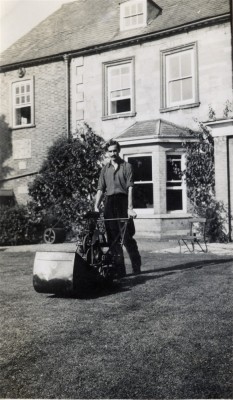 Mr Stanley Blackmore writes: “My brother-in-law Robert, mowing the front lawn with the Atco that had been donated by a parishioner. He was a 3rd. cousin Blackmore, from Mexico (where a branch of the family emigrated from our native Devon in 1823). That branch still exists, with off-shoots spreading up into the States and Canada. Robert came to school in England (St. Edwards, Oxford), and then immediately joined up at the outbreak of WW2 in the KOYLI (Kings Own Yorkshire Light Infantry). He went right through the North Africa campaign, then Sicily and Italy and up into Germany. He ended up as a Major with a Mention in Despatches. He married my sister in 1940.” The scene is in the front garden, with the south elevation of the Rectory in the background.