Bedesman by the west door of St Mary's 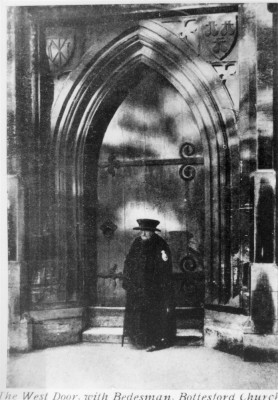 This old postard shows one of the Bedesmen who lived in the Duke of Rutland’s Hospital, generally known as the Rutland Flats. This building, whuch stands on Normanton Lane, Bottesford, was first built in the 1590s by the Countess of Rutland. Until recent years, its inhabitants were elderly village men who were known as Bedesmen. One of their duties was to wear the uniform when attending church. In this picture, one of the men is standing in front of the west door of St Mary’s church. The stone shields above the door display, left, religious symbols and, right, the arms of the Roos family who lived at Belvoir Castle from the 13th Century to the late 15th Century.