Lincolnshire Harbys in Bottesford and Muston 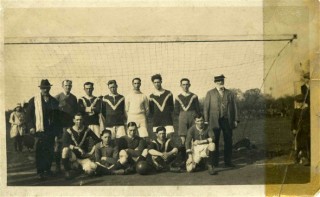 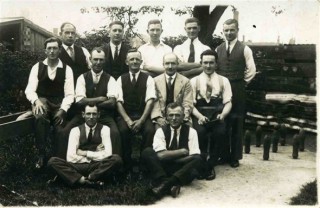 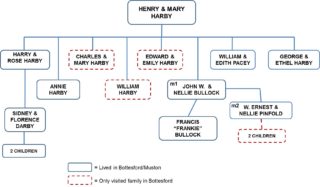 The Harbys who lived in Bottesford or Muston

It is strange how life develops. Sometimes a family finds itself inexorably drawn to a place, becoming more involved in a village or town than they could have originally imagined.

The Harby family of Pickworth near Folkingham in Lincolnshire had for a long time been based around the hamlets east of Grantham, working as farm labourers. Late in the 19th century some factor must have come into play that was the first little thread which ultimately pulled several strands of the Harbys to settle in Bottesford. Was it love?

The family head at that time was Henry Harby, originally from Aslackby and living in Pickworth after marrying Mary France who had been born in the village. In 1883 Henry and Mary had their first child and named him Harry. He was followed by Annie, Charles, William, Edward, Ellen, Arthur, Edith and George. Space would have been at a premium and in the 1891 census young Harry is recorded as living at his grandmother Louisa France’s cottage. Thereafter he seems to have had a bit of an independent streak, never again being recorded as living with his parents.

Harry started out as an agricultural labourer and in 1901 was working as a Horse Waggoner on a farm at Bottom Lodge in Croxton Kerrial. At The Nook, the nearby home of the Staniland family, Rose Taylor was working as a general domestic servant. She had been born in Easthorpe and was related to various local families including the Ashers and the Proctors. At some point they fell for each other and started to go steady. On 1st June 1903 Harry and Rose were married in Bottesford church and the couple moved to 21 Main Street, in Butcher’s Row, the house where they would live out their lives. The following year they had a little girl and named her Florence Edith Harby.

By 1911 Harry had changed to work as a platelayer on the burgeoning Great North Railway; perhaps he got the move via Rose’s father, Smith Taylor, who had been a gatekeeper for the GNR for many years.

When the Great War started Harry’s brother Charles signed up immediately, soon followed by Harry himself. His experience with working horses led to his posting to the Army Service Corps. His regimental number T4/061462 indicates that he was assigned to Horsed Transport within the fourth intake of Kitchener’s New Army. He was posted to Egypt, Gallipoli and ultimately to France, being demobbed in 1918. The local correspondent for the Grantham Journal in May 1915 reported:

News for the Dardanelles

Driver H. Harby, A.S.C., who has been in the Dardanelles for some time, has written a cheery letter home, in which he says that he and Driver Arthur Ward, another Bottesford man, had a fine time at Alexandria before going to the Gallipoli Peninsula. Drivers Harby and Ward have, however, been separated for three months. Harby says he is having a delightful time and is in the best of health. He would like to be remembered to all his friends at home.

Harry and Rose’s daughter Florence only had to change one letter of her name when she married Sidney Darby in 1923 and the couple moved into another of the cottages in Butcher’s Row. Some memories of them can be found in the comments at this page.

Sid Darby can be seen in the accompanying pictures of village skittle and football teams.

Harry and Rose died in 1950 and 1967 respectively and are buried in Bottesford churchyard – and this gives us a key clue to the next link to the Harby family as a neighbouring gravestone marks the plot of Francis Bullock. Click here to see the story of Harry’s nephew.