You are here: Home>Topics>On the Wings of the Morning, by Vincent Holyoak>Chapter 1: Don't you know there's a war on? 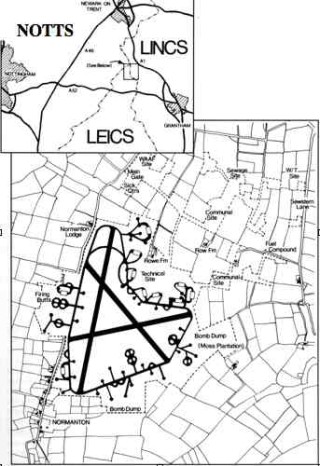 RAF Bottesford Left: general location. Below: layout of airfield as of 1945.

Zeppelin! – the very name was enough to strike terror into the hearts of British civilians during the First World War. In reality the German airships did little damage and inflicted only minor casualties, but they clearly showed the psychological effect of air attacks on the morale of the civil population. As usual, popular hysteria was fanned by the press who made much of the fact that Britain’s island status could no longer guarantee protection from attack. The attacks had also fired the imagination of military theorists who predicted that air power would playa decisive role in any future conflict, a belief which they clung onto when there were attempts to disband the RAF in the 1920s. From 1934 onwards the service began a programme of expansion to counter the threat posed by Nazi Germany. Although by 1937 it had doubled in size, at the outbreak of war in 1939 the Air Ministry knew that a further expansion in aircraft, aircrew training and aerodromes was needed. By the summer of 1940 the defeat in France had shown beyond any doubt that Britain’s only remaining means of offensive action was by air power – chiefly the bomber. Within a few months the largest scheme of public works ever seen in Britain – one which would change the face of the English landscape irrevocably – was beginning. A workforce of 60,000 men was rapidly engaged in airfield construction. By December 1944 the number of available airfields had expanded from a pre-war total of 170 to 670 and at the peak of construction in 1942 one new airfield was opening every three days at a cost of around £1,000,000 each (roughly equivalent to £18,000,000 in 1995). Like all counties, Leicestershire and Nottinghamshire were not excluded. In 1939 they had a combined total of just six airfields (1), but by 1945 this had risen to 28. Lincolnshire, in comparison, because of its proximity to Germany, had 45 operational aerodromes, more than any other county.

The task of supplying new airfields was the responsibility of the Air Ministry’s Directorate-General of Works who scanned maps for promising sites, then despatched engineers to examine them first-hand. They looked for possible obstructions in the vicinity, examined the soil and made their recommendations. It was on such an errand that ‘the men from the Ministry’ arrived in the quiet rural parish of Bottesford in Leicestershire.

Situated in the beautiful Vale of Belvoir, Bottesford is mostly known for its 13th century parish church, St. Mary’s whose spire, the tallest in the county, is visible for miles. The church was built under the patronage of the Earls of Rutland whose family seat, Belvoir Castle, looks down on the Vale from a nearby ridge. Like all villages in the Vale, for centuries Bottesford owed its living to corn. Such was the prosperity of the Duke’s estates that even the industrial revolution and the growth of nearby large manufacturing cities such as Nottingham and Leicester had little effect. Despite the construction of a canal in the 1790s and a railway sixty years later, change was slow to come, and was resisted by successive Dukes as much as possible. But times were indeed changing and in 1920 much of the estate had to be sold off to pay death duties. A few tenants were finally able to buy the farms tended by their families for generations, although others were unable to raise the money and became homeless. It was on some of these ‘lucky’ former tenants that the Air Ministry invoked the full force of the Emergency Powers (Defence) Act 1939 and gave them just a few days to pack their belongings and leave their land.

The Air Ministry’s surveyors had found two suitable sites in the Vale. The first was close to the village of Langar in Nottinghamshire; the second covered an area of 700 acres north of Bottesford around the hamlet of Normanton, where the counties of Leicestershire, Nottinghamshire and Lincolnshire meet. RAF policy was to operate aerodromes in groups of two or three, with a ‘parent’ station administering one or two ‘satellites’, so the site at Normanton was chosen as the parent and Langar as the satellite. After the requisition orders had been served various tenders were considered and the contracts for both Normanton and Langar were awarded to George Wimpey and Co. Like several other well-known builders, Wimpeys were to make their fortune in the wartime airfield construction programme. They began work at Normanton in the winter of 1940/41 under the direction of the No.17 Works Area Superintendent Engineer, Mr Thompson. Their first task was to build a prefabricated hangar on the edge of the hamlet into which convoys of lorries began unloading materials, most of which arrived via the LNER railway and Bottesford station. Alongside the hangar Wimpeys built a canteen for their workmen staffed by local women. A few building workers lived on site, but the majority, mostly Irishmen, were ferried daily from Nottingham in buses chartered from the South Notts. Bus Company. In the first few weeks over twelve miles of hedgerows were torn out, the site levelled, and drainage pipes connected with the Ease Drain, a field dyke running eastwards from Normanton. Throughout the war the heavy clay soil made waterlogging a constant problem. In wet weather the landing ground became a quagmire and the run-off from hangars and runways turned the Ease Drain into a raging torrent.

Once the site had been levelled the concrete perimeter track and runways followed. The aerodrome was built to the standard Class’ A’ bomber configuration with three runways arranged in a triangle. The low power-to-weight ratios of aircraft in those days meant that to get airborne they had to take off into the wind in order to obtain maximum lift. The aerodrome’s main runway, built parallel to the Normanton-Bennington road was 1900 yards long, 50 yards in width and aligned to the prevailing wind. If the wind changed, takeoffs could be switched to either of the two subsidiary run¬ways. At the same time three further T2 hangars were constructed on the technical site around Rowe Farm and a start was made on the hundreds of prefabricated buildings, equivalent to a small town, which were needed to run the aerodrome and house its staff. In order to reduce the threat of air attack the sleeping huts, mess halls and station sick quarters were spread out across fifteen separate sites to the north. Miles of concrete roads and power lines had to be laid connecting them. A High Frequency transmitting station was placed opposite Beck Farm by an ancient droveway known as Sewstern Lane and a Direction Finding Station was placed in a meadow south of Normanton Thorns where the three counties actually meet. This meant that although the main gate and the SSQ were in Nottinghamshire, the guard hut a few feet behind, the technical site and living sites were all in Lincolnshire. To further confuse matters the main runway and the bomb dump were squarely in Leicestershire!

After almost a year of work RAF Station Bottesford officially opened on September 10th 1941 in No.5 (Bomber) Group under the command of Group Captain W.G. Cheshire (2). Although closer to Normanton than Bottesford, whenever possible it was Air Ministry policy to name aerodromes after the parish in which they were built. Nonetheless, several of the sites remained unfinished, and when five days after the station had opened the Air Officer Commanding 5 Group,Air Vice-Marshal John Slessor made known his wishes to have the aerodrome operational within one month, the Ministry of Works redoubled their efforts to hurry Wimpeys along. They were unsuccessful, and when Group Captain Cheshire inspected the building work at the start of November, he described progress ‘far from satisfactory’. Although part of the delay was due to the decision to extend the main runway, at Langar the problems were even greater, for here the main runway had been built on the wrong axis and had to be completely torn up and started again!

Nevertheless, on September 22nd a Wellington bomber tested Bottesford’s runways for the first time, and soon afterwards permission was granted for 12 Secondary Flying Training School at Grantham to use them for practice circuits and landings. The first of their aircraft, a Proctor piloted by Wing Commander Corbley, dropped in briefly on October 11th. Four days later the airfield’s ‘Drem lighting’ – essential for night flying – was tested for the first time.

At dusk on a chilly night soon afterwards the airfield’s beacon was hitched on to a three ton truck, towed to position down a nearby lane and switched on, flashing out the station’s coded identity letters’ AQ’ in morse for the first time. Bottesford was finally ready for action. Over the next two years the beacon took on a special significance for the tired bomber crews circling above in the darkness waiting their turn to land, because it meant they had made it. They were home, they were safe, and for a few short hours at least they could sleep and try to forget the horrors of the night.

© All rights are reserved