You are here: Home>Topics>On the Wings of the Morning, by Vincent Holyoak>Chapter 11: Shuttle to Friedrichshaven The morning of 22nd June 1943. W/Cdr Gomm and his crew at Blida, Algeria following 'Operation Bellicose', the daring raid on the Zeppelin works at Friedrichshaven 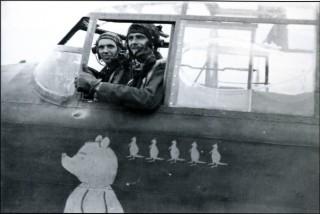 June 1943 began with thundery rain meaning a few days stand-down. The respite ended on the 11th when conditions improved enough for eighteen crews to be briefed for an attack on Dusseldorf. Squadron Leader Ambrose had arrived two days before to take over command of ‘C’ Flight, and found himself flying that night as second dickey with his ‘B’ Flight colleague, ‘Mac’ MacKenzie. Also with them was the Gunnery Leader, Bob Betts, on this, the 28th operation of MacKenzie’s tour. The aircraft took off between 22.30 hours and midnight, the ORB commenting:


All the 467 aircraft took off in spite of heavy thunder showers and thick mist on the aerodrome, and it was a bleak sight as they splashed their way through the puddles down the runway.

The Lancasters began returning around 5 am the following morning, announcing their arrival to flying control and asking permission to ‘pancake’. Congestion in the air meant that returning aircraft would be stacked in the circuit at 1,000 feet intervals, gradually descending as they waited for their turn to land. In charge of Flying Control at Bottesford was an officer by the unfortunate name of Squadron Leader Flowerdew. Unfortunate, that is, because the aerodrome’s callsign was ‘Flowerbed’. As a consequence, mischievous captains exhilarated to be back would often regale him over the R/T with ‘Hallo Flowerdew, Hallo Flowerdew’, to which his reply would be an emphatic ‘Hallo …, Hallo …, this is FLOWERBED, this is FLOWERBED. Over’!

On the morning of the 12th, however, the mood in Flying Control was a sombre one. Of MacKenzie and Flight Sergeant Freddie Wilmot nothing more was heard. 467 had lost two flight commanders and a gunnery leader in one night, and in Mac MacKenzie a universally liked founding member of the Squadron. Marie Cooper recalled that the New Zealander’s tousled blonde head was always a welcome sight at debriefing. Fond of the ‘Inkspots’, and the proud owner of an Opel sports car, Don MacKenzie was a few weeks short of his 22nd birthday. His successor on ‘B’ Flight was Keith Sinclair, a former journalist from Melbourne who had the distinction of being one of few foreign reporters to be granted an interview with Adolf Hitler before the war. He broke ground on 467 in that he was the Squadron’s first Australian flight commander. On the same day that Keith Sinclair was appointed to fill MacKenzie’s shoes it was officially announced that Wing Commander Gomm had been awarded the DSO for his leadership over the past few months. The award was a popular one and within a short time he was again to demonstrate his virtuosity, and in so doing, bring about two ‘firsts’ for the Command.

For some months 5 Group had been toying with the problem of hitting precision targets. Pathfinder marking had improved general accuracy, but a myriad of unpredictable such as changing winds, cloud, industrial haze or even enemy decoys were often encountered at the last minute leading to further errors. A growing body of opinion felt that these could be reduced by having an experienced captain actually orbiting the target area and calling out corrections to the rest of the force over the R/T. Such an approach had been quite successful on the recent Dams raid and in a daylight attack on the Schneider armaments factory at Le Creusot in October 1942, but never before had it been tested at night on a conventional target. Now Intelligence had discovered that the Zeppelin factory at Friedrichshaven on the shores of Lake Constance was being used for the production of Wurzburg ground radar sets,vital for the control of German nightfighters. As a single factory such a small target would offer an excellent opportunity to test the new procedure, and as a further departure the crews were instructed to fly south to recently captured airfields in North Africa. This was to be the first of what subsequently became known as the ‘Shuttle Raids’, and meant not only that the German nightfighters waiting over France could be outwitted, but that another target could be bombed with equal surprise on their eventual return.

Rumours first began to circulate at Bottesford when the Equipment Section took delivery of khaki shorts, bush shirts and a quantity of prewar pith helmets more in keeping with the North West frontier than a busy bomber station. Further fuel was added when the Squadron’s most experienced crews spent a week practising ‘radio controlled bombing’ at Wainfleet range on the Wash. After weeks of preparation, on the evening of June 21st eight aircraft took off from Bottesford to join the ‘Operation Bellicose’ attack force led by Group Captain Slee. Having formed up off the coast of France they carried out a feint towards the Ruhr before dog-legging south. Unfortunately, in the process Slee’s aircraft received a flak hit and he was forced to hand over to his deputy, Wing Commander Gomm. Violent electrical storms were encountered over France, and the aircraft were viciously buffeted by turbulence. Flashes of lightning lit the clouds from within and static electricity danced between gun barrels and propeller blades. However, as they prepared to make the final run-in to the target the clouds below them parted and Friedrichshaven could be clearly seen in the hazy moonlight. Gomm reported afterwards:


Sortie completed. Clear, moon not much effect due to high cloud. Took over at rendezvous point 0225. Flares dropped by P.F.F. 0238 to E of target. 0239 PFF red about 1 1/2 miles E of target. 0240 green T.I. 400 yards E of target. 0241 own a/c dropped green T.I. and flares dropped on target. 0243 a/c ordered to attack visually. 0244 P.F.F. offered to back up T.I. and permission granted. 0247 own a/c dropped green T.I. 0247 indirect bombing ordered due to number of T.I.’s scattered about. 0302 attack completed. Bombed green T.I. nearest target, own bombing not observed, obscured by smoke. Other bombs seen to fall on SE comer of shed. The attack could have been successful but for the following reasons:
llumination. Not effective owing to high cloud.
Not sufficient flares.
First green T.l. accurate but backers-up too far from target.
Heavier opposition than expected.
There was very little wind over target.
A controlled attack (Radio Telephone) call and will be successful.


The report made no mention of the fact that Gomm’s dissatisfaction with the marking led him to make his own attempt at extremely low level, attracting the attention of all the light flak in the vicinity. Despite his pessimism, post-raid reconnaissance estimated that ten percent of the bombs struck the factory, causing serious damage. Although there were no losses, several aircraft sustained flak damage. Keith Sinclair’s PO-Z had an engine almost severed over the target. With the help of his flight engineer, Paddy Traynor, he managed to extinguish the flames and nurse the Lancaster through alpine valleys to the Mediterranean, Blida and safety. Spares would take several weeks to reach North Africa, so when on the 23rd the returning crews bombed La Spezia, Sinclair borrowed Stu Hooper’s Lancaster. The latter, now tour expired, was in no hurry to go anywhere. When the seven crews landed back at Bottesford in the early hours of June 24th they brought with them ample supplies of grapes, wine and bananas, and enough cases of sunburn and the dreaded ‘Gyppo Tummy’ to keep SSQ busy for some time to come.