You are here: Home>Topics>On the Wings of the Morning, by Vincent Holyoak>Chapter 6: Operation Millenium 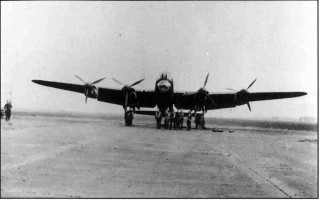 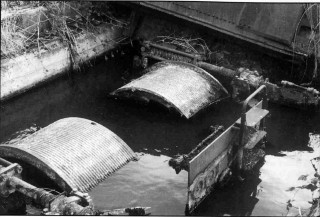 The remains of the arrester gear alongside Bottesford's main runway today. The two cable drums protrude from their water filled pit, with - to the right - the control panel

As the ground crews made their way out to the flights after breakfast on the 30th May, it was with the knowledge that they had a very long day ahead of them. For one thing, since the 26th May the number of aircraft to be readied every morning was almost double they had been asked to prepare before. Something special appeared to be in the offing, Successes were desperately needed, something very much in the mind of the Command’s CO, Sir Arthur Harris. Since Harris had taken over Bomber Command in February major strides forward had been made in both techniques and results, but many still doubted its effectiveness. Harris knew that something was required which would fire the imagination of the public, whilst at the same time demonstrating the potential of strategic bombing and silencing its detractors. This led him to suggest to Churchill and Sir Charles Portal, the Chief of the Air Staff, the idea of a single raid on a German city using 1,000 aircraft, and just as he’d hoped, the idea was an appealing one. But agreement did not alter the fact that the operation would be supremely difficult to plan, and also a major gamble.

Although the Billancourt raid back in March had introduced the idea of a concentration of aircraft making synchronous bombing runs over the target, the new plan called for three times as many aircraft. This would greatly increase the chances of collision, And what if, rather than swamping the defences as hoped, the concentration merely made the aircraft easy targets? Even more important was the fact that Bomber Command lacked the resources to make such an attack. It would be necessary to use crews from Operational Training Units, and whilst these would include experienced instructors, many would be untried. The potential for disaster was certainly there. Harris hoped to use the force towards the end of May when there would be a full moon. As it turned out, poor weather delayed the raid and forced a change in target from the Germany’s second largest city, Hamburg, to its third, Cologne.

From the moment the teleprinter clattered into life in the operations block around midday on May 30th, the excitement began to build. In the early afternoon the details came through. Bottesford was required to provide twelve aircraft. Briefing was at 6.30, when Group Captain Swain announced that the force would comprise over one thousand aircraft, making this the largest raid in the history of air warfare, there were spontaneous cheers and shouts of approval. A personal message from Sir Arthur Harris concluded the briefing, ‘Let him have it – right on the chin!’, As the crews trudged up to the communal site they were in good humour, The noise from the Sergeants’ Mess following the pre-ops meal made a sharp contrast to the normal subdued conversation before take-off as the men stood in groups, laughing together and singing all the ribald songs in their repertoire, The singing and cat-calls continued as lorries took them down onto the airfield to dress for the flight ahead.

By midnight all were in their aircraft carrying out final checks. Just two days before Wing Commander FR. Jeffs AFC had taken over command of the Squadron from Charles Fothergill. Not yet checked out on the Lancaster himself, he now stood by the aerodrome control van watching the aircraft taxi out for take-off. All twelve lifted off safely in the space of thirteen minutes, A part of the third and final wave, by the time they reached Eindhoven seventy miles from the target, the attack had already begun and Cologne was visible as a bright glow on the horizon. There was no cloud and good visibility, but a dense swathe of smoke reached up to over 15,000 feet over the city. The flak defences appeared to be overwhelmed and searchlights listlessly swept the skies, All the crews from Bottesford reported that they had bombed the ‘primary’ aiming point, and the journeys to and from the target were described as uneventful, although ‘Prune’ Leland spotted a Ju 88 which did not attack, and an engine failed on ‘Mac’ McCarthy’s aircraft. He flew back on three engines, well within the Lancaster’s capabilities, Numerous bombers had been seen falling in flames, Bomber Command lost 41 aircraft, considered an acceptable proportion given the number actually taking part and the damage inflicted. Flight Sergeant Bobby Weatherall, a Canadian air gunner on ‘Pat’ Pattinson’s crew wrote in his diary:

Twelve-thirty finds us leaving the English coast. Climbed to 13,000 feet where it was minus 20 degrees. Quiet trip all the way in, and I had a sore neck looking for fighters that weren’t there. Well, it is inhumanly impossible to imagine what a sight met us. The second (sic) largest city in Germany bust and shattered. The city looked like one huge ballfire. We ran in and dropped our load. I saw the 4,000 lbs go, and what a sight! Steered a course for home; they were after us all the way back. Ric got sick from weaving.

Harris was not slow to capitalize on the success of his gamble which had captured newspaper headlines across the world. Two nights later on the night of 1/2nd June he organized another outing for the force, this time to Essen in the Ruhr. A new record of fourteen crews from 207 were detailed. Take-off was just before midnight, but in the event four aircraft were forced to return early, three with engine failure and the last with a malfunction in the oxygen system. For those who reached the target visibility was reduced by cloud and industrial haze. The Wellingtons of 3 Group had been tasked with dropping marker flares whilst the crews from Bottesford were a part of the 5 Group follow-up, their job to stoke up the fires. To this end each aircraft carried a 4,000 Ib ‘cookie’ packed with high explosive, and also canisters containing 720 4 lb incendiaries. For official purposes this combination of weaponry was chillingly described as ‘Blast and Maximum Incendiary’: the cookie would tear open buildings and the incendiaries would burn whatever was exposed. Because the raid had not gone to plan Essen was again the target on the 2/3rd. Six aircraft from 207 took part, and Bobby Weatherall, again flying with ‘Pat’ Pattinson wrote:

Briefed at 6.30 and once more it was Essen. Bang all feed in the Mess. Took off at 12 and headed out. Passed out from lack of oxygen but came around again O.K. again, it is up to liS to liglit the fires. Feelillg very bad. Two motors collked out, but we made it all the other two. Landed at base in good time. Went straight all leave.’

As Weatherall headed off on leave preparations were being made for a raid that night on Bremen. With no cloud to hamper them, the force inflicted heavy damage on the city. Unfortunately Warrant Officer Colin Wathey and crew in EM-Y R5847 became the Squadron’s first Lancaster casualties when they were shot down over the Netherlands by a night fighter. All seven were killed. The Squadron had not lost a crew on operations for four months, but these were to be the first of a steady run which would continue for another three years. By the end of the war 207 Squadron would have the second highest loss rate in the whole of 5 Group with 926 aircrew killed.

Bottesford was closed to flying on Monday 15th June whilst arrester gear was fitted at each end of the three runwayss. This was an adaptation of the equipment used on aircraft carriers and was designed to prevent accidents caused by bombers making delayed touchdowns and overshooting. Many Manchester captains preferred to make powered approaches, considering it better to make a fast landing with speed in hand rather than risk having to open up and go round again – which, given the nature of the Vulture, was always a gamble. The equipment, manufactured by Mather and Platt Ltd of Manchester, consisted of a large brake drum around which was wrapped a steel hawser. This ran from the drum through a series of pulleys across the runway and back again, then on to another drum, the cable being raised to a height of 12 inches. The aircraft were to be fitted with hydraulically operated hooks with which to ‘snag’ the wire, and tests on the Manchester indicated that it could be brought to a halt from a speed of 72 mph in a distance of 460 yards. The installation of arrester gear was calculated at £21,000 per airfield, roughly £350,000 in today’s money. However, by the time tests had been completed and the arrester gear installed at twenty aerodromes, pilot training had been improved, runways generally lengthened and the weight penalty brought about by the attachment of hooks to aircraft was considered too much. More importantly, Manchesters had been phased out from operations. The scheme was therefore officially discontinued in June 1943,and at Bottesford the mechanisms were never used operationally. Very astutely, George Hawes had noted in his diary:

They are putting in ‘arrester’ gear at the end of each runway. I am wondering if this great added expense is really worthwhile and what is going to happen to all this equipment after the war is finally over. I’m tipping it will just be left to rot like thousands of pounds worth of other material …

As predicted, heavily rusted but otherwise intact, the arrester units still remain in situ today. However, at about the same time as the arrester gear was fitted, surface cracks and sinkage began to appear on both the runways and perimeter tracks. The problems were attributed to subsidence, possibly due to an underground stream. They underlined the difficulties of having to build so many airfields at once, in that a lack of suitable sites inevitably led to the use of locations which might otherwise have been rejected. As an example, Bottesford’s shortest runway, 09/27 always had a noticeable hump in the middle. Hurried plans were made for resurfacing, and because there was no other aerodrome locally which could take the Squadron, it remained operational whilst the work went on around it. In the short term crews only flew from other aerodromes when repairs forced the closure of a particular runway. As it turned out, the temporary closure of sections of the peri-track was to have dire consequences.

As part of a continuing campaign against the city, the port of Emden on Germany’s north eastern coast received attention on the night of the 20th June. Thirteen 207 crews were to take part, one being scrubbed before takeoff. Three others returned early due to mechanical problems, a higher number than usual since generally 207 had one of the best serviceability rates in the Group. However, if these crews thought they had problems, Flight Lieutenant Gerry Ings would surely have swapped places with them. An hour after leaving Bottesford both starboard engines failed and caught fire, forcing him to ditch Lancaster R5860 EM-Y in the North Sea. The wireless operator’s last transmission at 0053 gave their position as fifty miles off the Lincolnshire coast. When the last 207 aircraft touched down three hours later there was no more news of Ings. Although tired, after debriefing the crews asked Wing Commander Jeffs for permission to go back out and search for the popular Londoner and his crew. Much to their disgust ‘Ferdie’ Swain vetoed the idea, but a 1 Group Wellington found them in their dinghy after first light and they returned to Bottesford, battered but unbowed.