You are here: Home>Topics>On the Wings of the Morning, by Vincent Holyoak>Chapter 8: 'Advance Australia' 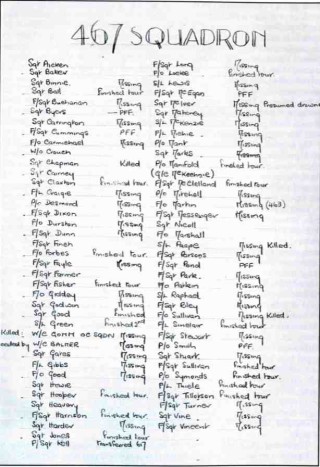 Page from the scrapbook of S/O Marie Cooper listing (most of) the captains on 467 Squadron, 1943

Bottesford did not reopen to flying until November 1942 when it becamehome to two squadrons. The first, 90 Squadron, had originally been formed for home defence in the Great War to counter the Zeppelin threat, and now found itself reactivated in 3 Group to fly Short’s four engined heavy bomber, the Stirling. 90 was only a temporary lodger, and would return to 3 Group territory in East Anglia once ready for operations. Wing Commander John Claydon DFC became 90’s new CO, but much of the work in reforming the squadron fell to the newly appointed adjutant, George Rawley, who in turn relied upon the experience of his NCO in charge of discipline, George Gee from Nottingham. The formation of a new unit was often used as a means of unloading unwanted personnel, so George Rawley insisted on interviewing every new posting, guided by George Gee:

Flight Sergeant Gee served with me at 3 Group H.Q., and in fact smoothed my path from civilian to useful member of the RAF. My time at Bottesford was more than occupied by the bumph associated with the work of forming the squadron. I billeted myself out with the Bottesford village butcher and his wife in the High Street. They were a benign old couple who looked after me very well. When we could snatch a few hours off Johnny Claydon used to take one or two of us to the Ram Jam Inn off the Al, or to Nottingham for the ‘Hole in the Wall’ or some other pub.

The first four Stirlings were delivered by pilots of the Air Transport Auxiliary between November 16-17th. Amongst the ferry pilots was Jim Mollinson, husband of the famous pre-war flier Amy Johnson, who was herself killed delivering an aircraft the previous year. Aircrews had also begun arriving, and within two weeks the Squadron was able to put up eight aircraft on a ‘Bullseye’, a night time cross-country exercise to accustom the crews to the demands of operational flying. To have the Squadron nearing readiness in just over a month was a remarkable achievement, especially considering that by now the aerodrome was also being shared with 467 Squadron Royal Australian Air Force. Cliff Allen, an engine fitter recently posted to 467, wrote:

It was several days before things got organized so a group of us went for a look around, doffed of course in gum boots. Our interest had been drawn by several Stirlings on the airfield, a type which most of us hadn’t seen before. They were an awesome sight, so high up from the ground, and peering up under the undercarriage was like looking at a bridge superstructure.

For all its impressiveness, the Stirling’s undercarriage was one of the design’s weaknesses. On the morning of December 18th 90 Squadron’s Flight Sergeant McGavin was informed that an undercarriage leg had buckled on one of the aircraft. He rushed down to the Flights and improvised a lashing with pieces of wood, but whilst underneath there was an audible groan and the unit collapsed completely, pinning him to the ground. The Squadron still had little equipment and by the time heavy lifting gear arrived from Norton Disney he was beyond help. Losses through operations were a sad but accepted reality, whereas deaths caused by faulty or poorly designed equipment were another matter entirely, and McGavin’s loss caused some disquiet. With the endless fatigues, the incessant rain and the mud, morale sank lower still when rumours spread that all leave had been cancelled for Christmas. Wing Commander Claydon was so concerned that he had the Squadron paraded in No.2 hangar, where he explained that 48 Hour passes would be issued for those living within a 20 mile radius, and for the rest there would be the usual entertainment. He also announced their imminent departure to Ridgwell in Essex to commence operations. After two days standdown for the usual festivities the advance party set out early on the morning of December 27th, the ground personnel entraining the next day at Bottesford station for their new home.

As already mentioned, during its last few weeks at Bottesford 90 Squadron had shared the station with 467 Squadron Royal Australian Air Force, which had been formed at Scampton on November 7th 1942to fly Lancasters in 5 Group. 467 was Bomber Command’s second Australian Lancaster squadron, the first being 1 Group’s Binbrook-based 460 Squadron. These units had been formed in response to the wishes of the Australian government that Australian flying personnel should be grouped together wherever possible. Australians and New Zealanders accounted for roughly a tenth of bomber aircrew, but continuing losses meant that even nominally Australian squadrons could at best only hope to have 75% Australian crewmen. In the beginning Aussies were actually very sparse on 467, the majority of crewmen being English, Canadian or ‘Kiwis’. Likewise the ground crews were also predominantly RAF, and the handful of Australian NCOs on strength were mostly older reservists with little enthusiasm. Aubrey Tongue, a former Aircraftman armourer from Nottingham recalled visiting the Station Armoury to obtain a replacement turret cupola, the large perspex ‘bubble’ which covered the air gunner. Inside the armoury was a solitary Australian Flight Sergeant ‘…aged about ninety’, sat on an ammunition box reading the Daily Mirror. Having taken his eyes off the newspaper long enough to ask Aubrey what he wanted, he wearily got to his feet and retrieved a battered Players tin from his pocket, prising the lid off at the same time to reveal various nuts and bolts inside. ‘Here Son’ he said handing over the tin, picking up the newspaper and resuming his seat, ‘See if you can find one in there’!

At the age of 29, 467’s commanding officer Wing Commander Cosme Gomm was a veteran. Tall and softly spoken, he was Brazilian born, but like the offspring of many expatriate families educated in England. He took up a short service commission in the RAF on his 21st birthday, and by the outbreak of war was a Flight Lieutenant, completing his first tour on 77 Squadron, flying Whitleys. In April 1941 he was awarded a DFC and posted to 604 Squadron at Middle Wallop, a nightfighter unit operating Beaufighters under the famous ‘Cat’s Eyes’ Cunningham. Whilst with 604Gomm accounted for two Heinkels and a Junkers 88 before taking up a staff appointment prior to promotion to Wing Commander in June and his posting to 467 Squadron in November. He proved to be an excellent choice as CO of the new Australian squadron. He led by example, a quality which especially endeared him to the Aussies. Despite his quiet nature his eccentricities manifested themselves in the form of a huge two-seater Oldsmobile, widely envied in times of such strict petrol rationing, and his habit of toasting drinking companions with the words ‘Never a Dull!’.

By a quirk of fate the Squadron’s two flight commanders were both ex- 207 Squadron Manchester pilots. ‘B’ Flight’s Squadron Leader ‘Pappy’ Paape, a New Zealander in the RAF, had flown his tour from Waddington, but for Dave Green of ‘A’ Flight this was his second tour at Bottesford, and he arranged for his first tour navigator Warrant Officer ‘Goldie’ Goldstraw to join him.

Four crews were posted to the Squadron on the day that it was formed, to be joined by 16 more over the following three weeks. In terms of experience they were a mixed bunch. Most were fresh from OTU and were still waiting to be converted onto the Lancaster at 1661 Conversion Unit. Some were starting their second tours. Amongst the latter was 22-year-old Flight Lieutenant Keith Thiele RNZAF, who had reverted to Flight Lieutenant in order to return immediately to operations rather than become an instructor. A handful of crews had been posted from other squadrons mid-way through their tours. Tactics were constantly being evolved in the bomber war and most of these men resented their move, fearing that the enforced rest whilst 467 worked-up might adversely affect their chances of survival. The first six Lancasters landed at Bottesford on November 24th to be followed a few hours later by a truck convoy carrying the ground crews. True to form, Bottesford made an immediate impression. Flying surreptitiously in the midupper turret of one of the Lancasters was Alan Dickens, an engine fitter who had not fancied the uncomfortable truck ride and had secured a lift for himself, his bicycle and his kitbags. He recalled that the RCAF pilot of his Lancaster, Sergeant Al Wark (an American from Seattle) rapidly lost patience as he circled overhead, vainly peering through the gloom to find some landmark and begin his approach. In the end he called up Flying Control and demanded ‘Where’s the goddam airfield?’. He received two Very cartridges in reply.

December 1942, alternately icy and drizzly, was spent familiarising air and ground crews with their aircraft. It was not without risk, and the Squadron’s first casualty came just three days before Christmas when Flying Officer Doug Bannerman RNZAF failed to return from a trip with a 207 Squadron crew from Langar. His crew were sent back to OTU to find another pilot, with the exception of his flight engineer who was assigned to Wing Commander Gomm.

The Squadron’s first appearance on the 5 Group Order of Battle on January 2nd 1943 saw five crews detailed to take part in a mining sortie off France’ Biscay ports. It was already dark as the Australian Sergeant Max Stewart’s ‘J-Jig’ reached the end of runway 21 and his bomb aimer flashed the identity letter to the chequered control van. On receiving an answering ‘green’ Stewart advanced the throttles, being careful to give a little more power to the port engines and a touch of right rudder to counteract the usual swing on takeoff. Heavily laden, she was slow to gain momentum, but soon the white runway lights were flashing beneath, and as her tail lifted and windows rattled with the rising note of her engines, ‘Jig’ slowly clawed into the air. To the small group who had gathered to wave the aircraft off she was visible as a steady pair of red and green lights as she laboured low over Beacon Hill in the direction of the red glow marking the spire of St. Mary’s. In the hours between the fading rumble of the last bomber and the crackling voice over the R/T announcing their return, tension was high, particularly amongst the groundcrews who had prepared the aircraft. But all returned safely, although Sergeant Stewart diverted to Predannack in Cornwall after what was described as ‘A pleasant and rather successful trip’.

Following another gardening sortie, five crews took part in a small scale trial run for Pathfinder Force Mosquitoes, testing the new ‘Oboe’ blind bombing device for dropping target markers. The target was Essen, and two aircraft were forced to return early due to compass and rear turret failure respectively. Of the others Flight Lieutenant Keith Thiele’s Lancaster was hit by flak over the target, holing both wings and damaging a propeller blade, and Jim Michie’s bomb aimer passed out through lack of oxygen, forcing him to release the bombs himself. The following night’s raid on Duisberg was particularly disappointing. Although five aircraft were detailed, a spate of last minute problems meant that only Sergeants Stewart and Wark were able to get away. Stewart returned safely, but Al Wark and his crew did not return and are commemorated on the Runnymede Memorial (1).

(1) He was not the only American to be killed on the Squadron. Bill Komaiko, navigator on Jim Michie’s crew who were lost on February 19th was from Chicago, Illinois.