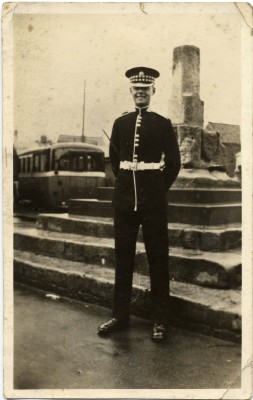 Robert, Betty’s older brother, seen in the uniform of the Scots Guards. Bob enlisted in the 1930s, before the outbreak of the Second World War. He served with the Gurkha Rifles during the war, and was promoted to Major. He also served in Palestine and Iraq. Here he is posing by Bottesford Market Cross, before leaving for his military career. In the background is Randall’s bus, waiting to depart for Grantham.