You are here: Home>Tags>Archive>Bottesford Local History Archive>Photographs of Bottesford Brickworks donated by Mrs Jean Round..

Photographs of Bottesford Brickworks donated by Mrs Jean Round.. 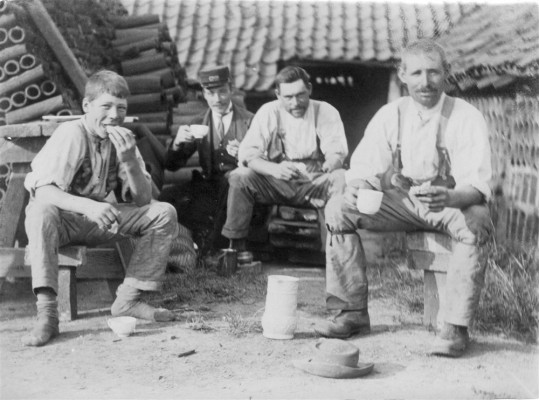 Four men enjoying a break during their work at Challand's brickyard, Normanton Lane, Bottesford. The man at the back of the group is wearing railway uniform and may be a brother of the old of the brick makers. The lad is probably a son.
Contributed by Mrs Jean Round

A small set of photographs taken probably in the first years of the 20th century as a demonstration set showing aspects of manufacturing bricks at Challands’ brickworks in Bottesford. There were two brickyards in the village during the late 19th Century. This one, operated by the Challands family, was located by Normanton Lane close to the level crossing with the railway. Bottesford station had a coal yard, which would have supplied fuel for the firing of bricks. Bottesford’s gas works was located next to the brickyard, with which it shared the requirement for coal supplies. The other brickyard was located on Grantham Road in Easthorpe, owned by the Hoe family, but this doesn’t appear to have lasted past the turn of the century.