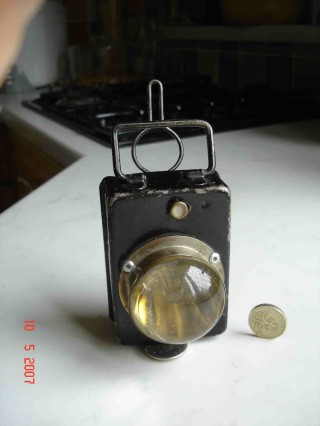 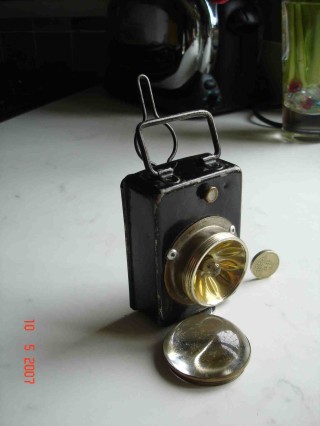 WW1 German Torch - The screw on lens allows some focusing of the beam of light. 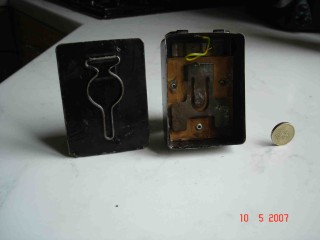 WW1 German Torch - Note the metal loop on the sliding back plate, this, provided in order to secure the torch to coat button. The continental style three cell 4.5 volt battery is still available.

Mr Louis Abbott lived in Queen Street Bottesford, his house to the rear of the original Co op shop. The Co op shop was rebuilt completely in the 1960s to include the site of Mr Abbots house. Mr Abbot had served as a soldier in WW1 – France where he was injured by ‘Mustard Gas’ and invalided home, always, thereafter to suffer from the damage to his lungs. In spite of this, he carried on his business of painting and sign writing, and was a well known Methodist local preacher in the Bottesford Long Bennington Redmile and Barkestone Le Vale circuit.

The torch, of German origin came back with him from France, and I can remember him, his wife, and his son Peter, using it in 1948. When both Mr Abbot and his Wife had died, his daughter in law Mrs Alan Abbot asked me ( John Simpson – Organist ) if I would look at her Fathers Harmonium with view to giving it to the Bottesford Methodist Church. I thought it unsuitable, but found inside it the old torch that I could remember from the 1940s, and asked if I could have it as a memento of Louis.

I found the torch had stopped working through corrosion and the breaking down of electrical insulation inside the casing. I took it to pieces by removing three rivets, and found that somebody else had tried to repair / replace the electrical insulation by inserting several layers of German written News print, i.e. possibly before 1918. I replaced the insulation and re-riveted the lens assembly and bulb insulated contact into the casing. I also soldered patches on to the rear sliding cover. After a repaint, the torch has been used ever since and has been on many camping holidays abroad.

In 1973, whilst camping in Yugoslavia, the torch was seen by an East German family who were very interested, and said that they could remember that type of torch being used in 1930s Germany.