Guy Lovett and his family 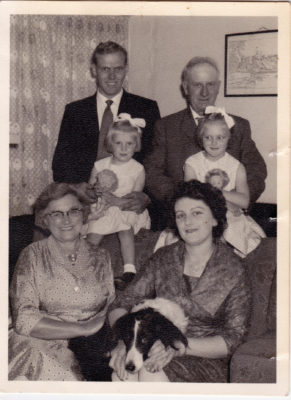 Guy Lovett and his family at home in Easthorpe during the 1950s
Copyright Ted Rayson, Bingham

This picture was taken by photographer Ted Rayson, who came from Bottesford but now lives in Bingham, Notts. It shows Mr Guy Lovett and his family at home in Easthorpe, c.1950-55. This was a cottage on Manor Road, Easthorpe, Bottesford, standing on the outer side of the bend the road makes around Easthorpe Manor (the house with a public right of way through its garden).

The people in the picture are:

The two girls who are Anne and Dan Glover’s daughters, Susan (left) and Jane (right).