You are here: Home>Tags>Archive>Bottesford Local History Archive>Peter Topps image collection>Margaret Barrett, daughter of the Rector of Muston in WW1

Margaret Barrett, daughter of the Rector of Muston in WW1 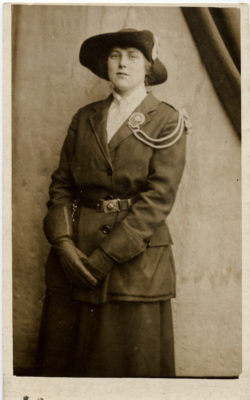 A photograph of Margaret Barrett, who was the daughter of the Reverend Tufnell Barrett, Rector of Muston from 1913. She is seen in uniform, though we are as yet unsure which uniform this is. The gloves suggest that she might have been a driver or dispatch rider, although the Land Army has been suggested.

Her brother John Tufnell Barrett served in the RFC and RAF from 1916 until he was shot down over Berlin in 1941.