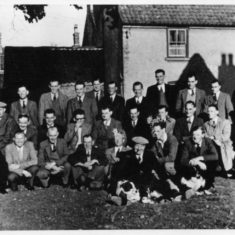 Villagers waiting for the coach in front of the Red Lion.
Mrs Barbara Sutton

Thirty two men are waiting for the coach to arrive to take them on a day’s outing. They are in the garden in front of the Red Lion on Grantham Road, Bottesford. The year is 1948, and Mrs Sutton recorded that it was on a Sunday!

Mrs B. Sutton has sent us the key to this photograph, and added the following information. “The picture shows an outing that took place on a Sunday in 1948 and was classed as a Pub Crawl to Matlock in Derbyshire, and they visited two or three pubs along the way. Apparently Dick Stanley went into one of the pubs and ordered a pint for everyone, taking the landlord by surprise. On arriving at Matlock, they walked up Abraham’s Heights and then visited some caves. One of the comments on the web page stated that everyone was wearing a tie, but if you look closely there is one person without a tie, namely my husband (J.W.Sutton).”

We have two versions of the key which identifies the men in the picture, provided by Mrs Sutton and by Philip (Chip) Sutton.

With regard to the men standing on the back row

For the middle row, seated

For the front row, squatting

It would be good if the differences between the two versions could be resolved. Can you help us sort this out, please?