Decay of the Red Lion

Threat to a much-loved Bottesford landmark 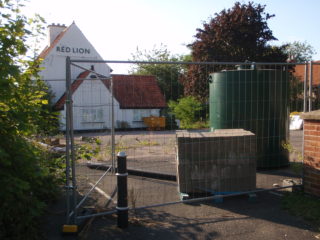 The Red Lion, no longer a welcoming pub, its carpark fenced off, planned to disappear beneath housing.
Photo by Catherine Pugh, 2019 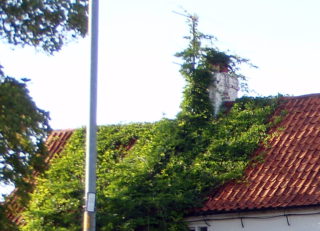 Wisteria allowed to smother the roof and chimney stack, loosening pantiles and allowing water to penetrate the fabric of this 18th Century building.
Photo by Catherine Pugh, 2019 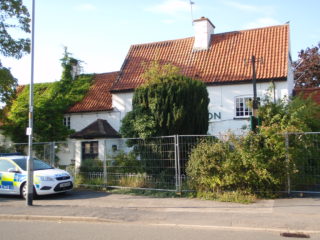 A sad sight - it used to be such a handsome building.
Photo by Catherine Pugh, 2019

The Red Lion has for years and years stood as a welcoming landmark for travellers approaching the village from Grantham. No longer a working pub (or anything else) it has been allowed to deteriorate into an overgrown state of dilapidation, an eyesore which we should all deplore. It has historic and architectural merit, and until recently was instantly recognisable as a building of modest beauty.

Bottesford residents have expressed concern about the deteriorating condition of the Red Lion. The Red Lion is a Grade 2 Listed Building in a conservation area and has been an inn since at least 1738.

As these photographs show rampant wisteria is being allowed to cover the lovely pantiled roof. This will inevitably loosen the tiles, leading to water damage to the building.

Melton Borough Council has already admitted that it was in error in refusing to give the Red Lion the status of an ‘asset of community value.’ However, when community value asset status was eventually granted by M.B.C. the building had already been sold to a property developer, with planning permission for conversion to housing.

Since the Red Lion is a listed building Melton Borough Council’s Listed Buildings Officer should be aware of its condition. The owner of a listed building has a legal responsibility to maintain the building. If the pantiled roof needs repair or replacement, the owners could be required to restore it with original hand-made pantiles. Naturally this would be difficult and extremely expensive.

The fear is that when a listed building is allowed to decay it may be declared unsafe and be demolished.