By Kate Pugh and Neil Fortey 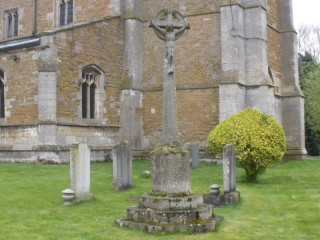 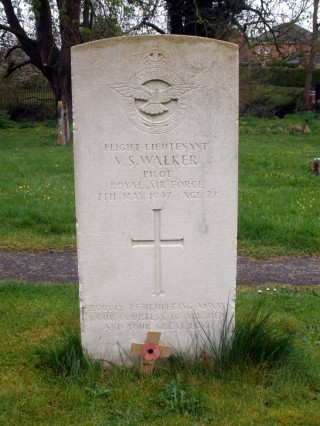 The Leicestershire War Memorials project has been started to ensure that every memorial in Leicestershire is fully recorded. It hopes, too, that volunteers will collect information about the men whose names are inscribed on these memorials.

The Muston memorial, which consists of a six-sided plinth surmounted by a crucifix, stands in front of Muston Parish Church. We believe it was last cleaned some years ago and is now classified as ‘at risk’ by the United Kingdom National Inventory of War Memorials. The memorial has become difficult, but not impossible, to read due to weathering, lichen and moss. A list of the names on the memorial, without dates or regiments, hangs inside the church on the pillar facing the door.

The first panel carries the inscription:

“Erected to the Glory of God and in Memory of Those Men connected with This Parish who Lost Their Lives in the War 1914-1918“.

The remaining panels commemorate the following servicemen who died in the First and Second World Wars. The inscribed words are recorded in bold-type below. Additional information has been obtained from the Commonwealth War Graves Commission website  http://www.cwgc.org/ .

No further record of L-C Bullock has been located as yet, regrettably.

See research in comments below. Pte Johnson appears, aged about 12, on on the Muston School photograph, 1902 (See Places – Muston – Saved from the Silver Fish)

Private Jesse Norman joined the Leicester Regiment on the 2nd June 1916 and was later transferred to the King’s Own Regiment. He was wounded on the 23rd May 1918 and on recovery was posted back to France with the Sherwood Foresters (Notts & Derby Regt), 11th Battalion,  Service Number 112905. Son of the late Henry and Elizabeth Norman; husband of Maud Norman, of Muston, Bottesford, Nottingham

Some uncertainty, but this is probably

Commander Charles Janson Smith, D.S.C., Royal Navy, HMS Aurora (an Arethusa class light cruiser launched in 1936 at Portsmouth). Son of the Reverend Leonard W. Smith and Ann Smith; husband of Marjorie Margaret Smith (nee McRea), of Sth Kensington London. [We understand that the Revd Smith in question was probably the Rector of Muston, the last resident rector of the parish.]

Close to the memorial there is a single serviceman’s grave whose stone commemorates:

Further details of the War Memorial are available at www.ukniwm.org.uk , where it is described as a ringed cross bearing a figure of Christ crucified, a tapered hexagonal shaft on hexagonal pedestal and three stepped base, of Ketton Stone, built by sculptor Mr William Silver Frith.

We would be grateful for any additional information, documents or photographs that readers can provide. We are particularly anxious to find out more about the men whose service records we have been unable to trace. Please contact us through the ‘Comments’ box on this page or add the information to this site’s Messages page. Thankyou.