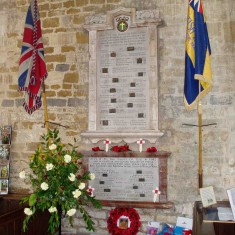 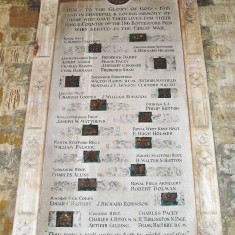 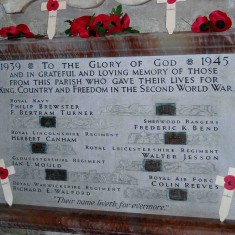 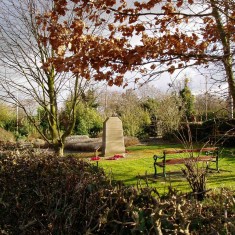 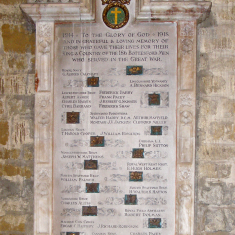 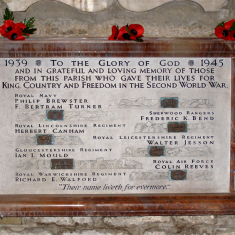 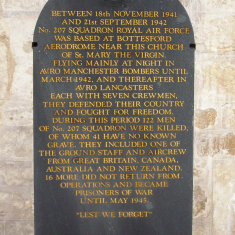 Those people who died in the First and Second World Wars from the Parish of Bottesford (which includes the nearby hamlets of Easthorpe,and Normanton) are commemorated on two memorial plaques in St Mary’s Church, Bottesford, mounted one above the other on the wall of the south aisle of the Church. The plaques, made of Hopton Wood Stone, a fine limestone resembling marble, display the names and service units of the men, together with their insignia.

In addition, the Memorial plaque mounted on the wall of the south transept at St Mary’s commemorates the men of 207 Squadron RAF who were based at Bottesford Airfield in 1941 and 1942.

We also include a picture of the Bottesford’s Millennium Garden War Memorial.

Please “click” on each person’s name to view their Commonwealth War Graves Commission casualty details.  To return to the Bottesford Living History site please go back to the previous page on your web browser.

* Charles Baines latterly served with the East Lancashire Regiment, 2nd Battalion (30035). Formerly he was in the Leicestershire Regiment (33371) as listed on the Bottesford War Memorial.

The two memorials are inscribed as follows:

And in grateful & loving memory of those who gave their lives for their King & Country of the 186 Bottesford men who served in the Great War.

“They were a wall unto us both by night and day.”

Also Thomas W Skinner who served in the Leicestershire Regiment and then the Labour Corps.