You are here: Home>Places>Farms>Steam engines: ploughing and threshing 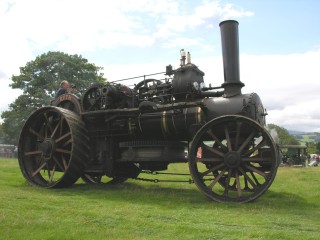 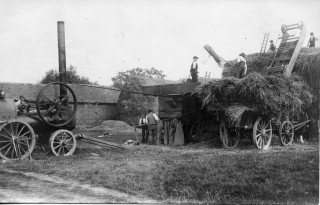 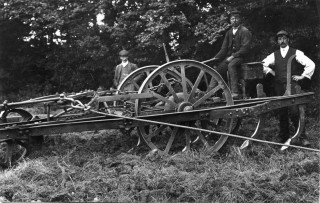 I was introduced to the Bottesford Living History Project web site during a visit to the town last week. It provided me with some interesting facts about the Marsh Family in the section on Village Families – The Marsh Family “Families and Horse Breeders” by Angela Marsh. I have still to read ‘The Book of Bottesford’ kindly lent to me by Chris Farmer who gave me an unexpected welcome for which I am most grateful.

For the past year I have been trying to follow the working life of a pair of John Fowler BB1 Steam Ploughing Engines that were delivered new to R. C. Marsh for G. E. Marsh & Sons, Bottesford – Steam Plough Proprietors – on 21st January 1919.. The engines are numbered 15332 registration AL 9854, and, 15333 registration AL 9855.  Agricultural implements ~ a 5-6 furrow shallow Plough, an 11-13 Tine Cultivator and a 2-wheel water cart ~ were delivered in May of the same year.

I am interested in where they worked, how they were used and who they were owned by ~ and of course any old photographs of the engines ~ and that is my reason for contacting you. I have seen a brass plate that gives G. E. Marsh’s address as Flawborough which adds to the mystery.

Amongst the paperwork is a Foreman’s Log Book for G.E. Marsh & Sons. The Foreman – T. Corby – recorded work completed by two engines for G.E. Marsh in the vicinity of the Leicester, Lincolnshire and Nottinghamshire border area during the period of September 1940 up to March 1941. According to the Log, both engines worked up to 11 hours a day – subject to wet conditions and snow! The logbook shows the engines referred to worked for Mr. Ravell of Normanton on 24-25th September cultivating twice 16 acres; A. Wade of Foston on 3rd October; Mr. Winters of Westborough (undated); the Reverend Staunton of Staunton Hall cultivating twice 60 acres (undated) and, Mr. Johnson of Long Bennington on 29th October 1940. It is not clear whether this Log was associated with the above engines or another pair owned by Marsh’s but it does give a wonderful insight into their work.

They remained in the ownership of G. E. Marsh and sons until September 1940 when they were sold to Harper Joseph Roads and driven to Sleaford to work from the former outdoor store yard and workshops of Ward and Dale ‘ Engineers and Contractors for Steam Ploughing, Cultivating, Harrowing, Mole Draining, Pond Cleaning, and, Pond & Lake clearing out’.

These two engines have survived ninety years and now have a good home in Herefordshire. One has been used in dredging contracts, and makes appearances at local Steam Rallies demonstrating how the plough is pulled back and forth between the pair of ploughing engines by the winch drum. The other is being rebuilt at this time having received a new boiler, firebox and smokebox.

By the way, I am pretty sure that George Marsh & Sons had several pairs of ploughing engines and many implements as he appears to have owned a lot of land and also did contract work for others. If anything turns up on his business in general I am very interested.

The attached photo is of the Marsh owned Ploughing Engine No. 15333 – registration AL 9855 – for you to see what’s what.

I am but a novice, but what you describe is known as a Portable Engine – a steam engine that had to be towed to the workplace. It drove a belt off one or more large flywheels which was then attached to the drive drum of a thrashing machine, sawbench, stone crusher, food processor etc. Marshall’s of Gainsborough made many. The present owner of the two ploughing engines has one circa 1905 which was brought back from Chile – a wreck! Another restoration project waiting for its time.

Sounds just as interesting as a ploughing engine!

As I said earlier, I am interested in any information that would complement what I have gathered so far. I would be most grateful if you could forward this to anyone who might be able to help. If you could publish all or part of my letter that would be even better.

Many thanks for your attention.