The Nativity story - dedicated to the memory of Lady Janetta Manners 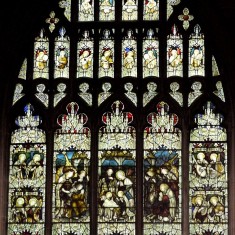 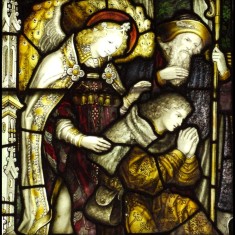 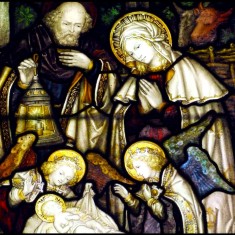 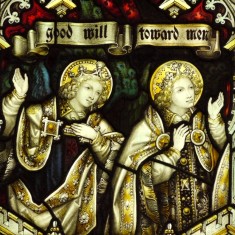 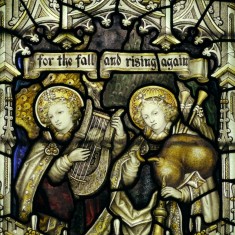 Visitors to St Mary’s church should allow time to break off from admiring the tombs of the Earls of Rutland and the other monuments to look at the display of fine Victorian stained glass that is to be seen. The great east chancel window is immediately impressive, but my favourite is that in south transept, which depicts scenes from the Nativity story.

This window was erected in 1902 to the memory of Lady Janetta Manners (1836-1899), the 2nd wife of John Manners, 7th Duke of Rutland, and daughter of Thomas and Louisa Georgiana Hughan. Among Lady Janetta’s achievements was the book, “Gems of German Poetry, Translated by Lady John Manners“, published by William Blackwood and Sons, Edinburgh and London, in 1865.

The stained glass in the window has been attributed to ‘Thomas Kempe’ according to Mike Saunders, local historian and a former churchwarden, but it seems possible that this is an error, and that the attribution should be to Charles Eamer Kempe, the famous Victorian master of stained glass. Admittedly, the wheatsheaf which was the Charles Eamer Kempe studio’s signature has not (yet) been located in the Bottesford window, but the style is so much like other work undoubtedly by them, and I am unaware of any other Victorian Stained Glass master by the name of Kempe.

Charles Eamer Kempe’s work is seen in many churches across England and Wales, including a large number in the North and Midlands, including Lichfield Cathedral. In the East Midlands, there is a set of some twenty windows by Charles Eamer Kempe at St Mary Magdalene, Hucknall. According to church’s website, “one Kempe window is an exact copy of one commissioned by Princess Alice after the death of her children, and the east window is reputed to contain a portrait of Byron“. His work can also be seen at Whitwick Manner, near Wolverhampton (National Trust) and in the Stained Glass Museum at Ely cathedral. You can learn more about the artist and his work at the website of The Kempe Society.

Visitors may hardly notice the window, which is ill lit, tucked away in the dark recess of the transept, daylight illumination hampered by the mesh of protective steel bars attached to the outside. Also, much of painted and stained glass is detailed on a fine scale and hard to see when standing below looking up. But it is worth careful attention. Take a pair of binoculars perhaps.

The window is made up of a large number of individual panels, each executed with exquisite artistry and mastery of the art. The central set is a triptych whose central panel shows the Nativity itself, in the manger. To either side are panels showing the Adoration, the magi accompanied by angels. Another panels depicts the archangel and the virgin at the Annunciation. However, one of the true wonders is the array of side panels depicting angels singing and playing a compendium of medieval musical instruments. The window incorporates great learning as well as meticulous execution and religious fervour. To my mind, it is a masterpiece that deserves to be better known.

St Mary’s, Bottesford, is among many other things the oldest building standing in the village, a Grade 1 Listed Building of historic importance. Its upkeep is assisted by the fund raising work of the Friends of St Mary’s, which you are encouraged to support.