Can You Identify this Mystery Object? 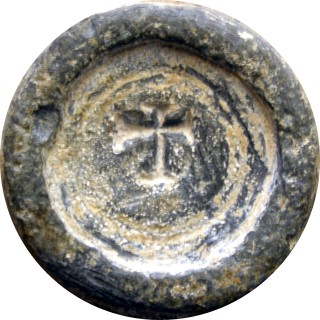 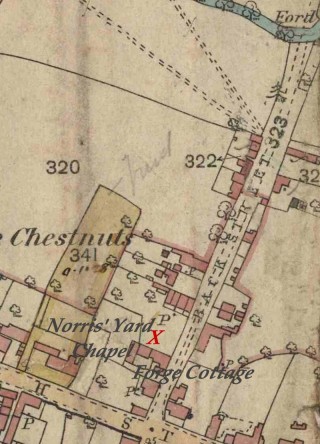 Albert (Back) Street, 1884. The approximate site of the find is marked X. 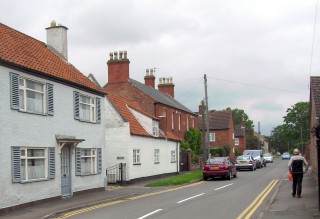 Albert Street today. Forge cottage is the second building on the left. Beyond it are the Edwardian houses on the site of Norris's yard. 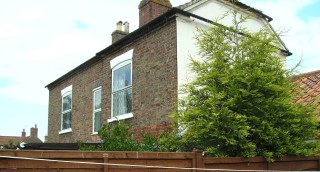 The Salem, or Independent, Chapel today. Now a private residence.

At the recent ‘Living History’ Exhibition a resident of Albert Street intrigued us all with this find from her back garden and the story of its discovery.

Collette , who has lived in Albert St since 1989, described digging a pond in the garden at the rear of the house not long after moving in. About four feet down she came across buried bones enclosed in a roll of cloth. The cloth, which had traces of a plaid design,  disintegrated when handled. Inside the bones, which appeared to be rib bones, were a number of these weights, or tokens. They are discs, possibly of lead,  about 2.5 cm in width and 0.5 cm thick. They have a raised rim on one side, and a cross is impressed in the surface inside the rim. The reverse side is plain and unmarked. Collette said that some of the other discs also had a cross on them, while the rest had a different design. Further digging unearthed the skull of a sheep or goat, buried a bit deeper than the cloth and ribs.

Collette kept one of the tokens and discarded the bones and remnants of cloth.

Collette’s house was built around the turn of the century. The garden is believed to have been part of the site of Norris’s (builder’s) yard. Parts of wheel hubs and handmade nails are often unearthed from the soil, as are clay pipes and pieces of pottery. The garden is also next to the former Salem Independent Chapel, now No.3 Albert St. Deeds from the late 19 th Century do not say that this chapel was still functioning at this time, but trade directories continued to list an Independent Salem Preacher (Joshua Lamb) up to the 1880s (e.g. Wright’s Directory, 1888).

Deeds from No.7 Albert St (Forge Cottage) show that the old chapel was in fact a barn whose upper story had been converted into a chapel. The property belonged to the Pickering family until 1918, when it was sold to George Norris, a joiner . Mr. Norris sold the barn-chapel in 1924 to James Tuxford, a retired coal merchant. His wife, Hester, was a well known cookery writer.

Joseph Pickering was an ironmonger and village postmaster. Perhaps the wheelwright’s artefacts found in Collette’s garden come from Pickering’s business, since George Norris only owned the chapel for six years.  The adjoining cottage, No.7, was referred to as Forge Cottage in a deed of 1885. In the conveyance of 1918, the chapel house is referred as ” stable open cow hovel and trap house and a building built over the same formerly used as a Chapel” .

What can we make of Collette’s discovery?

Are the discs weights?

Is it the burial of a sheep? The skull was deeper than the bones. Did is actually form part of the same skeleton?

Was there any connection with the forge and yard, or with the Salem Chapel ?