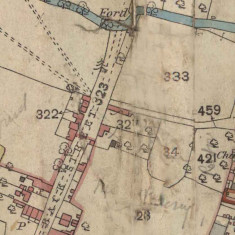 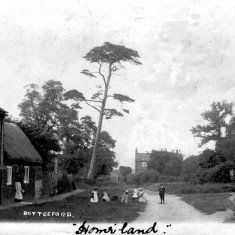 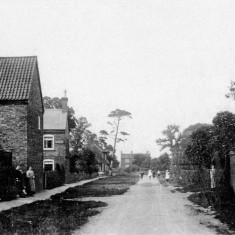 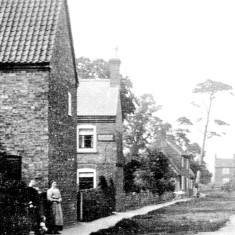 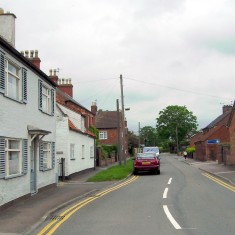 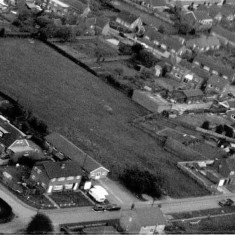 Aerial view of Parnham's Field in the mid 1980's showing the farm buildings to the right. The site of of Walford Close and the Woll Surgery 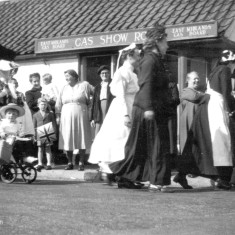 The Gas Showroom in 1951 - Festival of Britain Parade 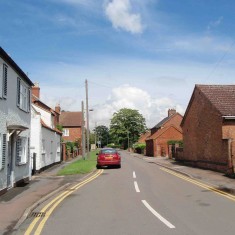 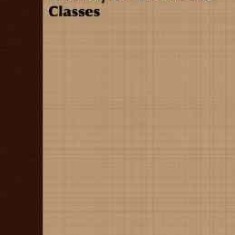 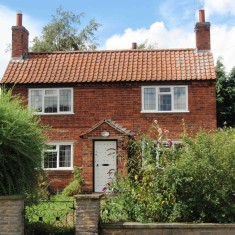 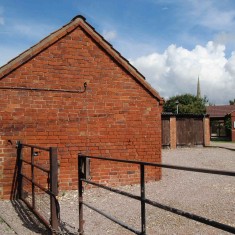 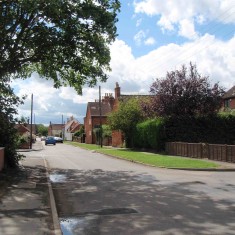 The 19th Century map above shows Albert Street as Back Street. It connected to what was known locally as Back Lane. Back Lane was wide enough for a horse and cart (passing what is now known as The Square) and connecting to present day Chapel Street.

There is an area of grass on the West side corner of Albert Street and the High Street now. The original building on this plot had to be demolished in the early 1980’s to allow easy access off the A52 (which then ran through the centre of the village) for the delivery of building materials to Church View

In the 1950’s this building was the an East Midlands Gas Board Showrooms and in the 1970s one of the many antique shops that flourished in Bottesford during that period.

Behind the cottage named ‘Forge Cottage’ (a blacksmith connection?) is the former Independent Salem chapel. According  Michael Honeybone’s “Book of Bottesford” the Chapel did not flourish in the nineteenth century and had smaller congregations than the other chapels in the village. In 1924, the building was sold by Mr. George Norris and became ‘Southbourne’ where Miss Hester Tuxford wrote a bestselling cookery book called ‘Cookery for the Middle Classes: With Special Chapter on Vegetarian Cookery & Useful Hints on Gas Stove Cooking.’ This 1930s book is still in press!

The present ‘Honeypot Cottage’ is where Billy Parnham lived, opposite to the land where he kept his cattle.

His obituary in 1958 records that he was a ‘noted breeder of Lincoln Red Bulls’. Mrs Dorothy Beedham also recalls (Click here for further details) that her family would purchase fresh milk from Mr. Parnham.

No 21 is the cottage end on to the road with a sign naming Richard Sherwin as a baker, who certainly lived there until 1908.

Past these cottages on the west side of Albert Street are new houses and the Farmhouse Close estate which was built on farmland belonging to Henry Goodson (a son of Herbert Goodson, publican at The Bull) in the 1980s.

Albert Street then continues to the River Devon and over the bridge to Devon Farm. At present farmed by Mr. and Mrs. Taylor, previous farmers at Devon Farm included J.W. and H.I. Whitmore from 1928 until at least 1941, as mentioned in the available directories.

The buildings by the entrance to the present day Pharmacy were part of the farm buildings which were demolished when the Woll Surgery was built. Walford Close was built in the 1980s on pasture land which was formerly part of William (Billy) Parnham’s farm. Melton Borough Council developed the site in order to build more housing in Bottesford for older people.

On the other side of Walford Close is the Scout Hut, built in 1971 as new accommodation for the Scouts and Guides organisations in Bottesford. The original building on the site was the British Legion Club, first entered in directories for Bottesford in 1928. The British Legion was founded in 1921 as a voice for the ex-service community after the First World War.  The club in Bottesford had secretaries – John Asher (1928); Charles W. Calcraft (1932); George Bell (1936); and was in existence until 1937 when the building was taken over and became The County Club. The County Club closed through lack of support in 1956 and Councillor Keel, the owner, ‘gifted’ the building to the Scouts at a cost of £125.

Further historical Information about shops and trades in Albert Street has been taken from business directories and census material.

1851 Census lists 12 households and uses the name Back Street.

A number of agricultural labourers lived on Back Street. Two Norris brothers were journeyman carpenter and shoemaker respectively. John Guy, a master plumber and glazier, was training his son Cornelius to follow him in the same trade. A labourer who worked on the Grantham Canal (opened in the 1790s) was also called Guy – Andrew Guy. It is not known if they were related.

Apart from women who were charwomen or dressmakers, two other trades are of interest. John Odson was listed as a cooper – a person who makes barrels. Were these made for breweries elsewhere or for ale brewed within the village?

There was also a baker living on Back Street. His name was John Lane, a master baker aged 64, born in Bottesford and married to Fanny who was born in Colsterworth.

Back Street is still the name used for Albert Street in the 1863 Drake’s Directory. John Lane was a baker.

Again there are very few trades-people to list. Henry Jackson was a land-owner on Back Street and was classed as a farmer and grazier. Francis Norris was a joiner and worked with wood and Cornelius Guy was trading as a plumber and glazier.

By 1877, Francis Norris had moved his business (joiner, builder and wheelwright) to the High Street but Cornelius Guy still had his business on Back Street.

John Duffin Junior (farmer and grazier) lived on Back Street but as his father (also John Duffin and a farmer) lived at Easthorpe, it is difficult to know where his land was.

Richard Sherwin was the baker on Back Street, presumably in the premises used by John Lane.

The trades people listed on Back Street are as follows;

There were a number of cottagers, graziers and agricultural labourers living on Albert Street. Richard Sherwin, the baker had a lodger. Edward A. Hardy was a railway clerk and another railway employee was John Kirk, a railway signal-man. John Tinley was a joiner, the Norris family, George and John, were involved in carpentry but Frank Norris was a draper’s assistant. Olivia Tinley had changed jobs, from dressmaker to dairymaid in less than a year and Daniel Guy, son of Cornelius Guy, was an elementary school-master. Very few women in households were entered as having occupations.

Richard Sherwin still had his bakery on Albert Street. Cottagers and graziers were Andrew Guy and Mrs. Martha Tinley. Mrs. Hannah Norris had her business on the High Street but her home remained on Albert Street.

There were six agricultural workers and John Norris was also a wheelwright .The occupations of women are more noticeable in this census. There was a housekeeper, housemaids, a charwoman, a laundress, a schoolteacher, (Rebecca Page), and Louise, wife of Richard Sherwin the baker, was a dressmaker.

After 1900, the available directories do not have entries naming the addresses of shops and trades people. However, there are private residents who placed entries in the directories. In 1908, the Rev. John French, the Primitive Methodist minister lived on Albert Street.

In directories of 1936 and 1941, the entry for Arthur Edward Silverwood gave his address as Albert Street. He was the registrar for births and deaths for the Bottesford sub-district but there is no indication of the whereabouts of his office. Older residents remember the Coffee House on Market Street being used as a Registry Office.