Read by the River Devon 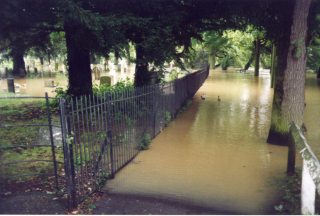 In August 2001 after a day of record rainfall the river burst its banks and flooded part of the churchyard, as well as much of the rest of the centre of the village.
Neil Fortey, August 2001

In Tissington they
Decorate their ancient wells,

But the “Flower by Numbers,”
Picture book images
Of a benign saviour,
Prettified for the visitors

Belie relics of more visceral rituals,
Rooted in fear of the power of
River Gods.

A deluge brought floods, crops flattened, rotted on the stem,

And the rituals took on their own force.
Performed improperly,
Or rejected by the gods, meant

Later, droughts, flood, famine,
Were wrath of a vengeful God,
Retribution for the Sins of Man.

Now we know better.
We analyse and consult and investigate,
We attribute cause and effect,

We name and list
Predicted weather events,
Define high pressure, low pressure,
Cyclones and anti-cyclones.
We have our clichés of carbon footprint and global warming,
And we build culverts and dykes and dams and reservoirs.

And still, the floods and the droughts defy us,
Predictable only in their unpredictability,
Rivers surge and burst their banks,
City centres are submerged,
And like ancient villages deserted
For plague or famine,
Houses become uninsurable and unsaleable,
Buildings crumble under water,
Bridges collapse, and roads are washed away.

The drought tolerant plants recommended
On Gardeners’ Question Time
Float down the street,

And the 4 x 4’s drive through Bottesford ford
For a thrill,
To impress the girlfriend,

Make the kids in the back scream,

And another poor fool is marooned
Midway.