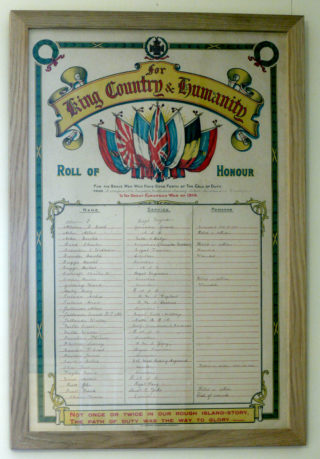 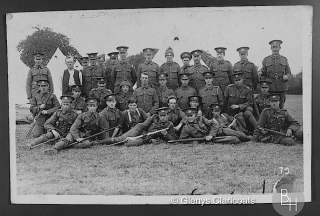 Harold Brewster, the village postman, on his round in Church Lane, Bottesford
From the family archive of the late Mrs Dorothy Beedham

In 1901, the Brewsters lived in a farmhouse on Folkingham Road, Pickworth, Lincs. With his parents were their children William (21), Charles (18), Lily (14) and Harold (10), now at school. The teacher’s log book from Pickworth County School includes two mentions of Harold. The first, from the 1st August 1901, says rather tersely “Harold Brewster employed by Mr Brewster in harvest work”. The second, dated December 9th 1904, reviews the general progress by their teacher, A.H.Goldsmith, of the school children in the “Lower Division” as follows, “The Lower Division has not done so well as the others, but this is due to the fact that they have been sadly neglected in past years. Their work is neater and their arithmetic was fairly well done. Reading is still very weak”. It goes on  to add names of the best and the weaker among the Lower Division, among the latter being Harold Brewster.

When he was 19, Harold went to Bottesford and was employed as a waggoner by William Henry Goodson at Devon Farm, where he was recorded aged 20 in the 1911 Census. He remained in the village until he enlisted in 1915.

Harold Brewster completed his attestation papers at Newark on the 15th February, 1915, becoming Private 3/17091, 1st Battalion Leicestershire Regiment. He appears to have joined up with Cyril Barrand from Bottesford. Cyril (Service Number 17092) would not survive the war. He and Harold had consecutive service numbers.

Harold Brewster was living on the High Street in Bottesford at the time. He held the rank of Private, then Lance Corporal (24th July 1915), before being promoted to Corporal (7th October 1915). His battalion is not indicated on the surviving service record, but is given on his Medal Index Card. The 1st Leicestershires were part of the original British Expeditionary Force and from 1915, when Harold Brewster joined them, were part of the 71st Brigade, 6th Division.

Home   –  from the 19th September 1916 to the 21st September 1917, when he was officially declared ‘No longer fit for War Service’. He was badly wounded in the Battle of the Somme. His discharge papers noted that his character was very good and his disability was a GS (Gun Shot wound) to his right elbow, and also declared that he was “Not to be compulsorily posted for Service under the Military Service Review of Exceptions Act Oct. 1917”. The home address given on his discharge papers was Pickworth, Lincolnshire.

Harold Brewster was awarded the 1914-15 Star, British War Medal and Victory Medal. He also received a Silver War Badge, No.247260.

Following his discharge in 1917 he joined the General Post Office (GPO) and eventually became Head Postman in Bottesford, the position he held when he retired in 1955. During WW2 he served with the Royal Observer Corps.

Harold Brewster married Jane Sutton in December 1917 in Grantham, soon after leaving the army. They went on the have four children, William, Dorothy, John Charles and Philip.

Tragically the family, having suffered no loss in the 1st World War, would lose Philip in the 2nd World War. He was killed serving with the Royal Navy and was nominally attached to the shore based establishment H.M.S. President III. He was actually serving as a gunner on the Merchant Navy vessel SS Oporto when he was lost at sea. The ship was part of Convoy OS 44 heading from Liverpool to Seville when it was torpedoed on the 13th March, 1943, 190 nautical miles west of Cape Finistere. There were only four survivors from the crew of 47. Able Seaman Philip Brewster is commemorated on the Portsmouth Naval Memorial, Panel 74, Column.

The late Mrs Dorothy Beedham (nee Brewster) would become the keeper of an extensive family collection of village memorabilia, including a large number of clippings from the Grantham Journal. Her twin brother Charlie worked for many years at Goodson’s butchers shop on Market Street, Bottesford.

Harold Brewster took a keen interest in village activities. He was a sidesman at Bottesford parish church, a founder member of the Bottesford Bowls Club (of which he later became an honorary member), a member of the British Legion Club and also of the Forget-me-not Club. In the 1939 Register, auxiliary postman Harold Brewster (d.o.b. 6th December, 1889), Jane Brewster (11th November, 1888) and butcher’s apprentice John C. Brewster (11th November, 1921) lived on Bottesford High Street.