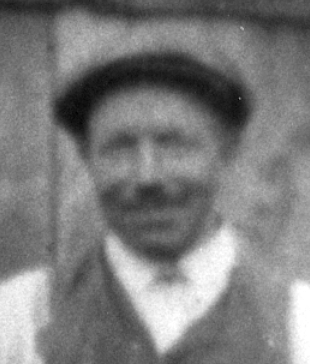 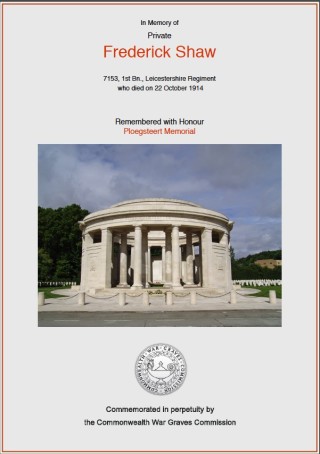 Tower of London Roll of Honour

Frederick Shaw was the first casualty from Bottesford to be killed in action on the 22 October 1914.

His name was 93rd to be read out on Thursday 14th August 2014 as part of the Roll of Honour at the Tower of London. This reading commenced at sunset, 8.40 pm and closed with the sounding of the Last Post.

As a reservist with the Leicestershire Regiment he was one of the first to re enlist. He served with the British Expeditionary Force in France from the 9th September 1914.

The War Diary of the 1st Bn., Leicestershire Regiment for October 1914 records the following after being ordered to take up line with the 17th Brigade East of Boulogne to Rue d Bois:

Frederick was one of the eleven Leicestershire men who lost their lives on that day. One of those supposedly referred to by the German Royal and Imperial Command on the 19th August 1914 as ‘General French’s contemptible little army’, who became known as ‘the old contemptibles’. (see details reported in ‘Routine orders of the Day’ 19th August 1915, The 1st Battalion Leicestershire War Diary)

Frederick Shaw’s name is inscribed on the Ploegsteert Memorial, in Flanders.

He was awarded the Victory Medal and the British Medal with clasp 2/2691.

Frederick Shaw was born in 1885 in Friskney Lincolnshire.

His parents were John and Elizabeth Shaw. John Shaw was also born in Friskney in 1851 and Elizabeth was born in Hagnaby, Lincolnshire in 1852.

His father was listed as a farmer and Frederick was at school.

His parents had also moved into the locality to live at Scarrington where his his father worked as a shepherd.

Also living locally, his brother, Charles Percy Shaw, worked at Waltham as an under waggoner boarding at his place of employment.

Fred worked for the Palmer family farmed at Beckinthorpe Farm for 8 years until war was declared in August 1914. When Fred re enlisted in Leicester he gave his brother’s address as his residence.

To date we have not been able to trace any of his family. However we are grateful to Mrs Margaret Smith (née Palmer) for identifying Fred Shaw’s photograph.–