I had a digital copy of this photograph for some time and, because it came to me along with other pictures of my grandfather William Ernest Pinfold, who served in Mesopotamia in WW1, I assumed it must in some way be connected to him. “Ernie” is not identifiable in the group of men, so might it include some other Pinfold relative? 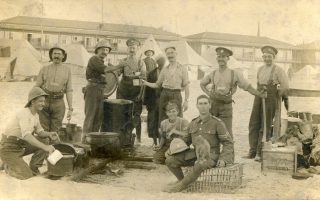 The photograph in question

It was difficult to identify the place, time or people involved, and a curiosity had been that none of the men are wearing Leicestershire Regiment insignia, whilst I knew Ernie Pinfold and his brother Richard Cecil Pinfold served with the “Tigers”. Their eldest brother Albert also served, but as a Gunner/Driver in the Royal Garrison Artillery. Both Cecil and Albert served in units only based in France, so they would not be in the photo.

Some requests for help at websites covering WW1 campaigns in the Middle East drew a blank. The men in the image looked to be wearing Army Service Corps (ASC) badges (apart from a young lad with a Royal Artillery cap) and the buildings in the background had distinctive open balconies. A man in the background wears Egyptian dress and there is a monkey perched on the knee of the lance corporal seated on a crate. But no one I approached could advise the place or identify the specific army unit.

Then a request came in to BLHS from a serving army officer commanding a Medical Squadron in the current army, asking permission to show a picture at his barracks history room of Harry Harby when he served with the 35th Field Ambulance in WW1, that unit being a direct antecedent of the modern squadron. This proved to be the catalyst to finding the key information about my unidentified photograph. Rather than being from the Pinfold side of my family, might it be from the Harby line, as Ernie’s wife, my grandmother, was Nellie Harby.

Her eldest brother Harry Harby, of Butcher’s Row, is already mentioned in several articles that we have on the BLHS web site, including his posting to Gallipoli in 1915 with the ASC and the postcards that he sent home when subsequently based in Egypt and then France. Here was a good candidate for a link with the photograph – why hadn’t I thought of that before. Doh! 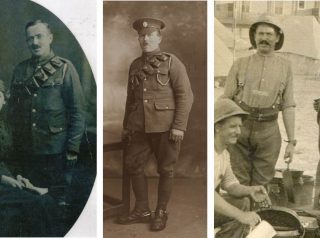 Harry Harby in England (Left, Centre) and in Egypt (Right)

Comparing the known face of Harry Harby from a photograph in the collection of Glenys Claricoats (see this link), one man in the photograph is surely a close resemblance: the man standing on the left with a cooking pan dangling from his hand. The moustache has got longer and a bit ragged, but the eyebrows, ears, jawline etc are the same. The image of the men and monkey looks to be Harry with a group of his fellow ASC drivers having a brew or meal at a town, presumably in Egypt, probably in 1916 after they had left Gallipoli.

So where was the location? The details in the background provide some clues. There are three sizeable buildings with sloping roofs and open continuous balconies at the first floor level. The buildings are beside a large flat expanse of ground. Over the ridges of the buildings can be seen the tops of sailing ship masts, suggesting that the location is by the water. From this angle of view the masts are very tall and they have cross-spars, so they are ocean going vessels, not just river craft. Also in view over one of the roofs is a tower which looks very much like a church steeple.

Thus I started some “educated guess” searches on Google Streetview and Google Images. Alexandria? No. Port Said? No. Other ports around the Mediterranean coast such as Gibraltar or Malta? No. And it certainly wasn’t in the Dardanelles where the Allied forces never had the luxury of buildings and flat ground on which to pose for such a picture.

Next I checked the collections of battalion War Diaries, some of which are available online, and they showed units of the ASC deployed to units guarding the Suez Canal. I had already found some pages of Harry Harby’s service record on the Find My Past system, so we knew some of his dates of service and that he had shipped to the Middle East with the 49th Reserve Park ASC company. The 49th Reserve Park, were not mentioned in particular in the War Diaries, but perhaps the canal was the water for the ships masts in the photo. So I looked for images of towns along the canal route. Port Fuad; or El Quantara? No.  Ismailia? No.

But in the images search for Ismailia the jackpot suddenly appeared. Port Tewfiq – a postcard image which captures the canal side, a narrow church steeple and a line of buildings with open balconies. This was it. 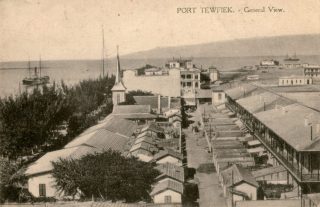 Port Tewfiq (there are various spellings)

New searches for images of a church in Port Tewfiq have revealed a 1942 US Army map which names the first street as Shari (or Boulevard) St Helene, named for the Roman Catholic church of St Helena which is the base of the elegant spire. The second street was Shari El Kinisa. Hidden from the postcard’s viewpoint, on the other side of the balconied buildings lay a third parallel street, Shari De Lesseps, named for the French diplomat who championed the construction of the canal. The open ground which had been where Harry and his cohort pitched their cooker in 1916 was still shown as level ground in the 1942 map, though railway sidings had been added later across their encampment area. 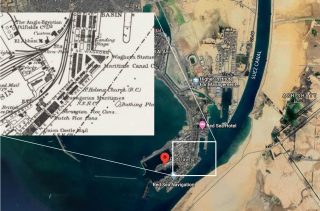 Port Tewfiq. 1942 Map keyed to current satellite view. The photo was taken where the rail lines are shown at the centre of the inset. 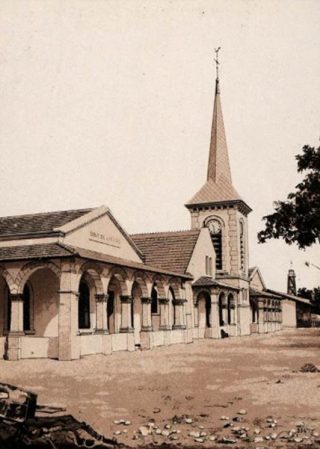 When the Suez Canal first opened in 1869 the land at the southern entrance only had a few shacks on it, but over time trading companies established stone buildings for load handling and the French, British and Egyptian canal owners built offices and accommodation blocks and hence Port Tewfiq became a sizeable town. The canal operated on a one-way convoy system, so vessels had to wait at Port Tewfiq until they could join the next north-bound convoy. Any pious sailors and passengers waiting at Port Tewfiq who sought religious solace were supported by the Anglo-French controlled Suez Canal Company which organised occasional services until, in 1887, the church of St Helena was built and opened with two priests in permanent residence.

Europeans derived various spellings to interpret the local Arabic name, so it is sometimes written Port Tewfik, Teufik, Taufiq or Tewfiek. The town grew over the decades as railway lines and new dockside facilities increased trading capacity. But there was a pause when the Suez crisis led to traffic being suspended for political reasons in the 1950s. The canal had been seen as a strategic asset ever since it opened.

When the Israelis attacked the Sinaii desert in the six day war of 1967 they advanced straight to the line of the canal. The town was ravaged by artillery and gun fire and the buildings along the waterside, including St Helena’s church, were ruined. For the next few years the city was in stasis. The image in the old postcard is unrecognisable today, as modern buildings have been built since the formal cessation of hostilities in the 1990s and Port Tewfiq has been subsumed into the greater Port Suez city.

I still wanted to know what Harry Harby was doing at Port Tewfiq. Had he been attached as an ASC driver to the 35th Field Ambulance by then? For they too had been based in Gallipoli and then had shifted to Egypt when the Turks won the Dardanelles campaign. So I put calls out for guidance and assistance and, with the help in particular of Jonathan D’Hooghe of the Lincolnshire branch of the Western Front Association, who was able to give a more focused insight into the War Diaries than my earlier efforts, a much fuller life story for Harry Harby has now been pieced together.

As happened to many of the soldiers who served in the Middle East , Harry suffered from dysentery at times and his family believed this affected his health later in life.

Union membership right page. The positioning in the third column from the right suggests Harry stopped working due to an accident at work.

See links in the right hand column of this web-page to see other articles about Harry, including the postcards he sent home during the Great War.

This research will continue as there are still some gaps to fill and any new information will be gratefully received.

The following sources of information have been very useful to this item:

Leicestershire Regiment – Have you a Tiger in your family

Find My past (Subscription)