A selection of poems by Mr Bill Bowman 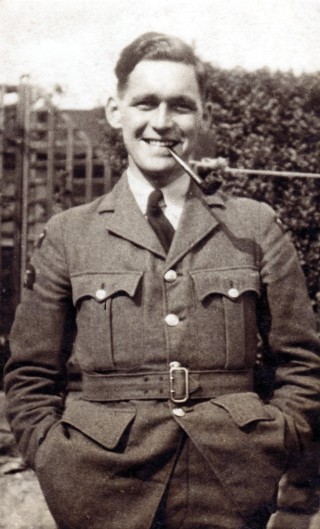 Bill Bowman in his mother's garden at Woodthorpe, 1942. 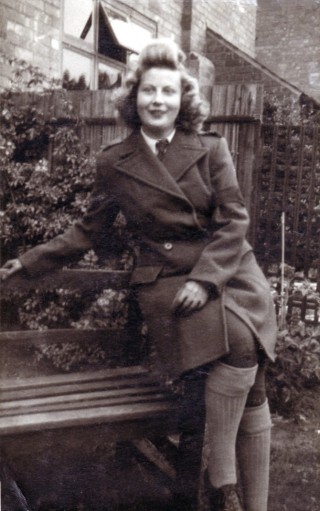 Sylvia Bowman in Women's Land Army uniform, at Woodthorpe in 1942.

A poem written by Bill Bowman in memory of a close friend lost during the Second World War.

These poems were written by the late William Gregory Bowman (“Bill”) and are reproduced by permission of his wife, Sylvia Bowman, of Rectory Court, Bottesford.

Bill was born in 1920, and Sylvia about a year later. Bill served in the RAF during the war, and Sylvia in the Women’s Land Army. After a career of hard work and raising their family, they decided to retire to one of the newly constructed bungalows built by Mr Ken Greasley in the grounds of the old Rectory. Bill wrote poetry all his life, and memories of the wartime were a returning theme. Walking on Beacon Hill, he was moved by the sight of the old Normanton Airfield. This small selection brings home the warmth and sadness that he felt.

I am still alive beneath this mud and choking weeds,

And though fifty winters with their rain and wind

Have left me scarred, I am still strong, for they

Built me well with concrete and steel.

Most times I sleep, for now it is so peaceful here,

As it was before they made me; a quiet and lonely

Place, far removed from busy towns, and they put me

Here pointing towards the sea – this was to be my

Sometimes I live again those evenings when they

Thundered down my road, loaded with death and brave

Young hearts and I watched them fade as upwards they

I, and others, waited in the long night hours to hear

The sound of engines’ beat, but when all was

Still and men and machines slept their weary sleep,

I still waited for those who never came, and I was

They bombed me too, in the dark days when we were

Weak, but strong arms came to patch my wounds so

That the beacon light could once more shine and

Guide my children down to my ever welcome breast.

And so time passed, men and machines came and

Went, and I recall the day when the last of my brood

Roared away and all was still – and I was never to

About me now I see the crumbling buildings, gaunt

against the sky; rusting hangars and broken huts.

No lights adorn my sides to guide the bombers in

And only a rare beam from a lonely car briefly

All round the corn waves golden in the summer’s

Sun, for long, long ago the war was done and all

Is peace and people forget, save you and me, and

Others like us. So say your prayer, and walk away,

For I shall return to my dreams and lie quiet,

We flew with the sky gods yester night

And it seemed that in our speeding flight

We touched the stars and the very door

Of Heaven. The earth, our distant floor,

Beckoned feebly with its twinkling light,

But we were too proud in our swift flight

To answer, and hurried thro’ the sky,

Some of us to live – and some to die.

Our wings stirred the angels from their sleep;

We laughed aloud, but they could only weep

For us bound to the depths of hell,

From the pitch blackness of the night

To earth, to vanish in a flaming light,

And in the wan rays of breaking day

A blackened pile to mark us where we lay.

I saw the phantom planes tonight

As I stood besides the winking beacon light;

I heard their engines in the fading sky

And I saw their shapes pass swiftly by;

Hampdens and Blenheims, Wimpeys too –

Old crates tonight above me flew –

Out to battle with the foe,

And one by one I heard them go.

Their long-gone crews were there tonight;

I glimpsed them in the beacon light,

But now they sleep in foreign soil

At rest, and free from mortal toil.

They died – yet live! For I heard them tonight

As I stood beside the winking beacon light.

No tears we shed or vain regrets we spoke;

No mother’s pleading or a lover’s sigh;

But just a handshake, some casual words,

A look, a crooked smile, ’twas our goodbye.

And we’d stood and talked of happy days;

We did not speak of the time of parting –

Perhaps the final parting of our ways –

But we recalled our joyful nights

With true company when the wine flowed free;

Of laughter, song, and all the friends we knew,

So should a parting forever be.

We talked of the things we’d pledged to do

When the drums of war had struck their final beat;

A whistle and a shout and you were gone –

My lonely footsteps echoed in the street.