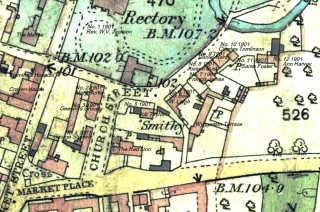 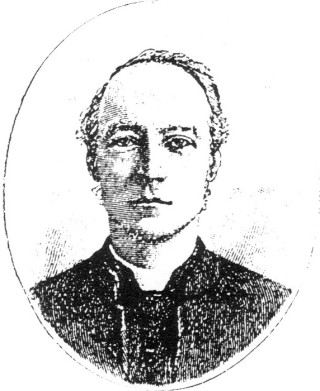 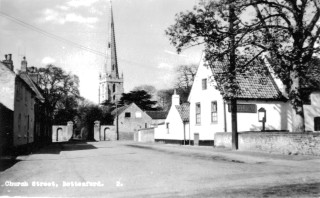 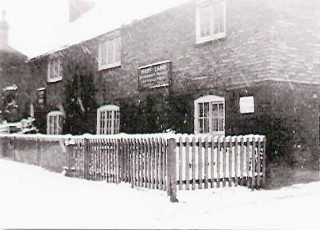 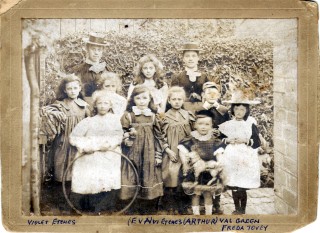 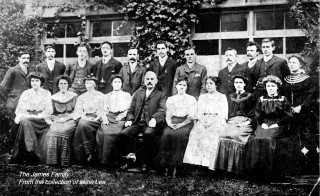 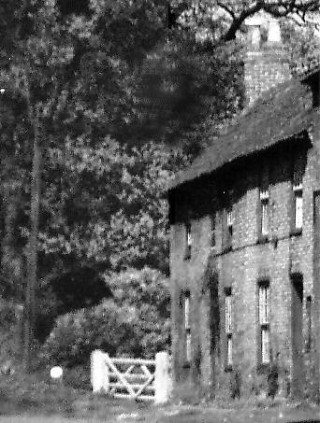 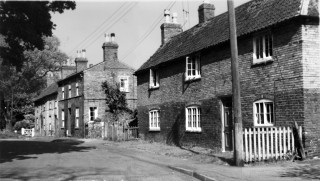 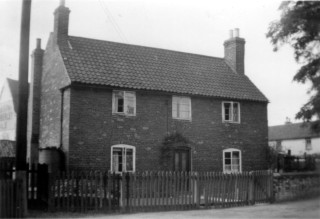 William Lamb, landlord of the Six Bells c. 1900, Ada Wade, his granddaughter c. 1910, Advertisement from 'How to Spend a Holiday in the Vale of Belvoir' 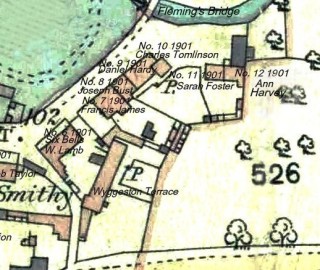 The 1901 Bottesford Census was carried out on the night of Sunday, March 31st. In January Queen Victoria had died and Edward V11 had become king. England was still at war in South Africa. Home Rule for Ireland was the most pressing domestic political problem. The total population of Britain was about 35 million.

The 1901 census for Bottesford illustrates typical inconsistencies between one census and the next.  The 1901 enumerator called first at Orston Lane Gate House (household 1) at the far western end of the village, where the railway crossing keeper lived, before proceeding to Church Street, which is the first street on the 1901 Bottesford Census.

In 1891 the enumerator went from Spalton’s Row (now Wyggeston Cottages) to Church Walk, starting with what is now No. 2 Church St (Rutland House), which he designates No. 1 Church Walk (household 27).

In 1901 the enumerator evidently approached from Rectory Lane. In this census No. 1 Church Street (household 2) is the Rectory, at that time occupied by Canon William Vincent Jackson, M.A. (Hertford College, Oxford) a 61 year old Londoner, born in Bloomsbury. He was a canon of Southwell and also rector of Kilvington and had previously been vicar of St. Stephen’s, Nottingham. The Reverend Jackson was married, but his Scotish wife, 45 year old Annie, his 11 year old daughter, Gwedolyn Ellen, and 8 year old son Montague (killed in France in 1916) were absent on the night of the census. He was apparently an evangelical whose fervent sermons were much appreciated by the Oddfellows. The other occupants of the house on March 31st were three female servants. None of  them were local women, though they all came from the East Midlands; two were from Nottinghamshire, cook, 42 year old Eliza Fox came from Elston, while parlourmaid, 21 one year old Kate White came from Tuxford. The housemaid, also 21, was Lizzie Hutchinson from Peterborough.

After calling at the Rectory, the 1901 enumerator walked up Church Street in the direction of Grantham Road. His next stop was what is now No. 7 Church Street, which in 1901 appears as No. 2 (household 3). Although a handsome, substantial house, ( seen right in photograph below)  in 1901 only two people lived there, 69 year old retired school mistress, Mary F Curtis and her 67 year old sister Anna M Curtis. According to this census both ladies were born in Brighton. They first appear on the Bottesford census in 1861, living with their widowed mother, Hannah, a 54 year old ‘Ladies School Mistress’ in Chapel Street. Mary and Anna are described as governesses and give their birthplace as Cuckfield, Sussex. In 1881 only Mary appears on the census, lodging at The Green, in the household of Elizabeth Norris, retired shoemaker. In the 1899 Wright’s Directory she describes herself as a ‘Private Resident’ of Church Street. By the time the Curtis sisters are living in Church Street, Hannah their mother has died. Perhaps their circumstances have improved, if they can afford to occupy such large house, or perhaps they only lodge there and the other occupants are away.

Next on the enumerator’s circuit is what is now No. 5 Church Street, designated by the enumerator as No. 3. In 1901 it was Geeson’s shop, run by 72 year old Elizabeth Geeson from Barrowby, assisted by her two single daughters, 40 year old Mary, born in London, and 38 year old Bottesford- born Annie.    Boarding with the Geesons were 7 year old Edith and 3 year old Arthur C. Geeson, born in Isleworth. The Parish Magazine October 1915 reported, ‘We regret to hear that Private Arthur Geeson has been seriously wounded, and is now in a hospital in France, and should like to express our sympathy with him family in their anxiety’. (See The Jallands Family in W.W.1 &and W.W.2 and comment from J. D’Hooghe The boy on the Box)

Arthur C. Geeson is the little boy sitting on the trunk in the photograph below. Arthur’s mother died within a year of his birth, in 1898, which perhaps explains how he comes to be living in Bottesford. 7 year old Edith is presumably his sister.

In 1901 the last house on Church Street before the junction with Grantham Road was what is now No. 3, Rutland House. The present No. 1 Church Street is a modern extension built on the back of the High Street house adjoining Taylor’s the Butcher’s. In 1901 Rutland House was No. 4 and was lived in by a retired innkeeper, 67 year old Bottesford born George Sherwin. His wife was Fanny, 68 years old from Warslow, Suffolk. Their single daughter, 36 year old Fanny, lived with them. George Sherwin  kept the Rutland Arms on High Street, at least until 1899, though this seems to have been a change of occupation since in the 1871 census he gives his occupation as ‘master saddler and harness maker’.

The enumerator must then have retraced his steps to reach the cottage behind The Red Lion, now No. 2 Church Street, then No. 5. Another Bottesford man, 57 year shoemaker Job Taylor lived and probably worked there. He was married to a Lincolnshire woman, 44 year old Sarah. They had two daughters living at home, 17 year old Alice and 11 year old Grace.

No. 6 Church Street was what is now No. 4, the Six Bells alehouse. The publican was 60 year old William Lamb, from Woolsthorpe, who had a second occupation as a joiner. Perhaps the running of the alehouse fell mostly to his wife, 54 year old Bottesford-born Mary. Certainly she took over the business when her husband died on March 31st 1913, running the Six Bells as a tea room. Their son, 22 year old Ernest, acted as groom and wagonette driver. (Was he the Ernest Lamb who was licensee of The Red Lion in 1912?)

Around the turn of the century Bottesford was a tourist destination. The Lambs ran excursions to Belvoir Castle, hired vehicles and provided accommodation for cyclists and other visitors. Herbert Moore, the 17 year old ‘yard boy’ helped out. Also living at the Six Bells was William and Mary’s granddaughter, 12 year old Ada L. Wade, later Mrs. Bateson, mother of Mrs. Ada Bond, a former resident of Six Bells still living in Bottesford.

Next to the Six Bells, at No.7 (now No.6) lived Francis James and his wife, Louisa. Francis was a 60 year old retired blacksmith born in Bottesford. His wife came from Cambridgeshire. Their single daughter, 30 year old Ellen, gives her occupation as Private Schoolmistress. Older residents of Bottesford remember Miss Ellen and her sister Miss Beatrice giving piano lessons at No. 6 Church Street. There were many members of the  James family in Bottesford and some of their descendents still live here.

Exactly where the ‘Private School’ was is not clear but was probably a room in the building behind the Co-op shop on Queen Street (for more information go to  A Bottesford School Photograph ca.1900). This 1900 photograph shows 9 pupils ranging in age from about twelve to about three. They must have been the children of families who were anxious to preserve a superior status and did not wish their children to mix with the offspring of agricultural labourers and even paupers at the National School. Only two are boys, one of these a toddler. Boys from the more well-to-do families would probably have attended a grammar school or boarding school. Charles Etches was a Nottingham man ‘living on his own means’ at No. 1 Belvoir Road. He and his wife had three daughters, Violet (12), Edith (10), Dorothy(4). While they may have wished their daughters to be educated in the more genteel atmosphere of the Miss James’ establishment, they were  not wealthy enough to employ more than one ‘general domestic’. Freda Tovey and Val Green do not appear on the 1901 census for Bottesford.

The three-year-old is little Arthur Cecil Geeson, at the front with his toy horse, not quite able to stay still for long enough for photograph’s lengthy exposure. He still wears a frock, tartan with lots of lace on the collar and cuffs, rather than the sailor suit of the 1902 photograph.

With relatively few pupils, the sisters may have used rooms in their own home, although they might have rented space for their school elsewhere as they did in the 1920s when they gave dancing classes in the room above the original Co-op building in Queen Street.

The remaining Church Street houses which appear on the 1901 census were demolished in the 1960s. Three appear in an old photograph, presumably numbers 8, 9. and10. 11 and 12 may have been those shown on the map reached through the white gate in the picture, on the site now occupied by Wyggeston Avenue.

At No. 8 lived the Bust family, all Bottesford born. Father, Joseph, was a cowman married to Harriet, both 48 years old. Their 18 year old daughter, Lizzie was a dressmaker, while son Ernest, 16, was apprenticed to a butcher. The youngest of the family was 7 year old Beatrice.

The Bust’s next-door neighbours at No. 9, were the parish clerk,sexton and town crier, Daniel Hardy, 73, and his wife 70 year old Elizabeth, originally from Great Gonerby.

Next to them in No. 10 lived Charles Tomlinson, retired gardener and formerly farmer, born in Worksop 1810. At 91 he was the second-oldest inhabitant of the village, one of 5 people over 90. He was cared for by his granddaughter, 27 year old Florence from Manchester.

Through the gate, in the remaining two cottages, two  elderly widows lived alone, at  No. 11,  87 year old widow Sarah Foster from Long Bennington  and, lastly, at No. 12, 79 year old Ann Harvey from Knipton.

Note: P on the map indicates a public pump used by several dwellings. Other houses had their own water supply, which is not marked.