You are here: Home>Topics>Geology and Natural History>Geology of the Bottesford Area

Geology of the Bottesford Area

Exploring the Vale of Belvoir 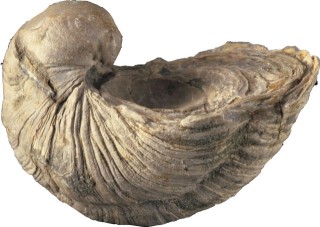 Gryphaea arcuata, the "Devil's Toenail", a fossil oyster from the bed of the Liassic sea. 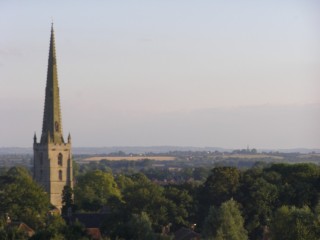 Looking SW from Beacon Hill past Bottesford spire towards Barkestone spire and the Marlstone Rock escarpment. 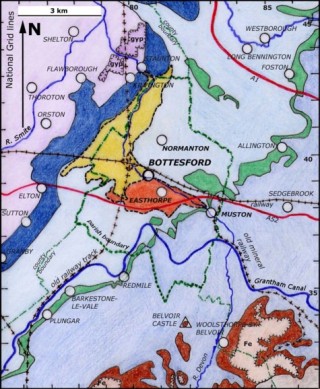 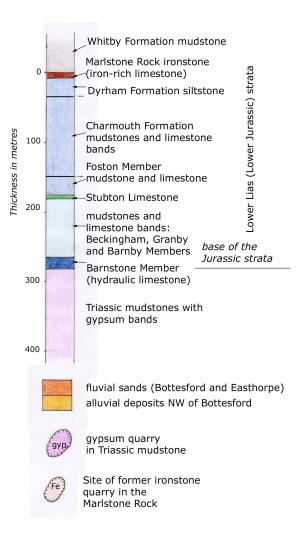 Stratigraphic column, the key to the sequence of rock formations on the geological map.

Rocks and minerals play a vital part in very many aspects of day to day life. “If you can’t grow it, you have to dig it out of the ground”, as someone once said. We are totally dependent on metals, minerals, oil and groundwater. Underlying rocks are also important in creating productive soils, and therefore to the success of farming.

Despite the lack of bare rock crags, bedrock is never far beneath our feet, and fossils appear where the clay soils have been ploughed or excavated. Fossilised shells of the exctinct oyster known as Gryphaea, or popularly as the “Devil’s Toenail”, are easy to find in the country around Bottesford, and delight children when the come across them on footpaths and in gardens.

The mudstones and limestone of the Vale of Belvoir around Bottesford and Muston belong to the oldest part of the Jurassic Period.  West of the low escarpment that stretches from Langar round to Staunton are older, Triassic mudstones with beds of gypsum. These rocks were formed as layers of sediment on ancient sea beds. The strata tilt gently southeastwards, so that the outcrop becomes progressively younger towards the Chalk of the Lincolnshire Wolds. This is country of subdued relief, with many flat areas and fens, in which bedrocks are rarely exposed. Deep beneath lie deposits of coal whose mining was proposed in the 1980s. Oil and gas have also been extracted on a small scale.

The geological map shows the rock formations in the Bottesford area. Each formation is shown as a band of different colour, showing where its outcrop runs across the countryside. It is based upon the geological maps mentioned, with the permission of the British Geological Survey. The key sets out the names of the formations and the age-sequence in which they occur.

Detailed information can be found in British Geological Survey maps Nottingham (E126), Grantham (E127), Melton Mowbray (E142) and Bourne (E143). These and books about geology can be purchased from: The British Geological Survey, Kingsley Dunham Centre, Keyworth, Nottingham BG12 5GG, or online at www.bgs.ac.uk . These are immensely, bewilderingly detailed, technically precise publications. Looking at the gentle fields of the area you might wonder how the experts can know what lies beneath us in so much detail. It’s a good question, but not one for this brief summary.

Another source is “The Geology of the East Midlands”, Geologists’s Association Guide No.63 (2003), which includes an excellent if somewhat muddy walk across the “Liassic of the Vale of Belvoir” described by Alan Brandon, which starts at Sutton in the Vale and follows public footpaths SE to Barkestone and then on to Belvoir Castle.

The Bottesford Community Heritage Project is grateful for the advice and assistance freely given by John Carney, Graham Lott, Caroline Adkins and Jim Rayner of the British Geological Survey, and by Glynda Easterbrook of the Open University.