You are here: Home>Topics>Geology and Natural History>William Stukely, Robert Darwin and the Elston Crocodile

A remarkable discovery in 1718 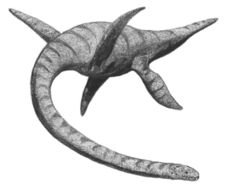 An artist's impression of a plesiosaur

William Stukely
William Stukely (or Stukeley), 1687-1765, was in many ways a remarkable man, a friend of Isaac Newton, one of the early members of the Royal Society and the first secretary (1718) of the Society of Antiquaries of London. He originated from Holbeach, Lincolnshire, and studied medicine in London, from whence he undertook a series of summer tours on horseback around the country, recording what he saw in diaries and sketchbooks. It was during these that he made his famous descriptions of antiquities, including the stone circles at Avebury and Stonehenge which he believed to have been temples of the Druids.

He practiced medicine in Grantham from 1726 to 1729. Michael Honeybone, in The Book of Grantham (1980), states that his house was on the east side of St Peter’s Hill, facing the Eleanor Cross. The demands of treating the sick of Grantham did not suit his creative mind, and he decided to change career and became a clergyman, being ordained as vicar of All Saints, Stamford, in 1730. He later returned to London where he sayed for the remainder of his life.

A staunch defender of biblical orthodoxy in the face of mounting geological speculation, William Stukely held to Bishop Ussher’s calculations regarding the time that had elapsed since the Creation, and saw the Druids as inheritors of Old Testement beliefs. Though most would disagree with some of his views today, he was influential in his day and his contribution as a pioneer of descriptive ‘field’ archaeology is greatly respected. Ironically, it may well be that the customs and ceremonies of modern-day druids owe more to Stukely’s creative imagination than they care to admit.

Though never resident in Bottesford or Muston, William Stukely is well worth mentioning here because of a presentation he made to the Royal Society, who then published it in their Transactions of the Royal Society for 1719 (Volume 30, No. 360, pages 963-968). A digital facsimile of this short paper can be seen via the internet at The Plesiosaur Site . The paper gives a description and speculative discussion of a slab of limestone which had been displayed to the Royal Society by Robert Darwin, of Elston Hall near Newark.

Robert Darwin
Robert Darwin was the father of Erasmus Darwin, and great-grandfather of Charles Darwin. According to The Plesiosaur Site, a review of Desmond King-Helle’s ‘Erasmus Darwin, a life of unequalled achievement‘ (Giles de la Mere, London 1999) provides this summary, “Robert Darwin, was a barrister who had discovered the first-known Jurassic fossil reptile. The specimen was of a Plesiosaur and was presented to The Royal Society on 11 December 1718.  …  The discovery stimulated considerable interest, and Robert Darwin was a guest at The Royal Society when Isaac Newton, F.R.S., chaired a meeting to discuss the find early in 1719. The Fellows concluded that these were the remains of a sea fish or amphibious creature and not of any known terrestrial animal. … Robert Darwin was clearly something of an independent-minded individual; shortly after his visit to The Royal Society he took a pet dog into Hall at rules. When the head porter ordered its removal, Robert Darwin threatened to knock him down with a pot aimed at his head. For this he had to give a sincere apology ….”

The “crocodile”
Stukely’s 1719 account says that the stone had provided a small platform by a well in the grounds of the John South, Rector of Elston. The stone was of a blue muddy Liassic limestone from quarries at Fulbeck, Lincolnshire. Its underside revealed fossil remains of the skeleton of a creature whose nature was the subject of speculation. Stukely dismissed the notion that it was a human skeleton, and showed that it belonged to a marine creature, which he though was a variety of “crocodile or porpoise”. The stone is still to be seen in the Natural History Museum in South Kensington.

Stukely described the fossil in this way, “There are Sixteen Vertebrae of the Back and Loyns very plain and diƒtinct, with their Proceƒses and intermediate Cartilages, Nine whole or partial Ribs of the Left-ƒide, the Os Sacrum, Ilium in ƒitu, and two Thigh-Bones diƒplac’d a little, the Beginnings of the Tibia and Fibula of the Right-Leg; on one Corner there ƒeem to be the Veƒtigia of a Foot with four of the five Toes, and a little way off an entire Toe, now left perfect in the Stone.- there are no leƒs than Eleven Joints of the Tail, and the Cartilages between them of a White Colour diƒtinguiƒhable from the reƒt.”

He adds that,  “Sir Hans Sloan has a Fiƒh-Sceleton, amongƒt his immenƒe Treaƒure of Curioƒities, found near this Place, given by the Duke of Rutland.” This indicates that other discoveries were being made at about this time, with the Duke of Rutland adding his contribution.

Since the 19th Century, the plesiosaurs have been firmly established as a group of extinct marine reptiles, some up to 14 metres long, that lived at the same time as the dinosaurs. Their long-necked streamlined shape appears to have inspired the evolution of the modern Loch Ness Monster.

Early stirrings of a new science
Geology was in its infancy, but it is clear that the existence and extent of the thin strip of blue mudstones and the abundance of fossil remains in them were known by this time, many years before William Smith compiled his famous geological map of England.

Stukely interpreted the fossil skeletal in the light of the Mosaic Law of Creation, seeing it, and the stone it resided in, as the result of the Great Catastrophe that had engulfed the world, Noah’s Flood. The idea that creatures had evolved and then become extinct over vast stretches of time had no place in this scheme. It would be several years before the Beagle set sail.

Palaeonotologists interpret the fossil remains as those of a plesiosaur, a marine reptile that swam in the warm seas of the Liassic period, some 200 million years ago. Robert Darwin’s curiosity and William Stukely’s astuteness in reporting the finding in such as august publication as that of the Royal Society are remarkable. It was to be more than another 100 years before the famous discoveries of Mary Anning were made, in Jurassic strata in the cliffs near Lyme Regis, Dorset, in the 1820s, and the existence of giant extinct reptiles such as dinosaurs and plesiosaurs became established. The outcrop of Lias runs from Dorset and along the foot of the long escarpment of the Cotswolds and on through Leicestershire and Lincolnshire, ending in the North York Moors.

In 2002 another superb specimen was discovered in cliffs at Speeton on the coast of the East Riding of Yorkshire, “exposed to the winds howling in from Siberia“, and was put on display in the Scarborough Museum (the Speeton plesiosaur).

Hats off!
Darwin and Stukely were well ahead of their time. Bottesfordians can claim to be close to the site of the first discovery of fossil reptiles in Britain, if not in the world!