A Village Shop in Bottesford 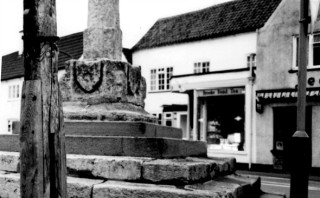 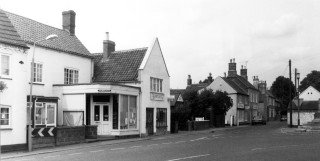 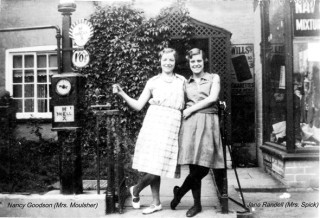 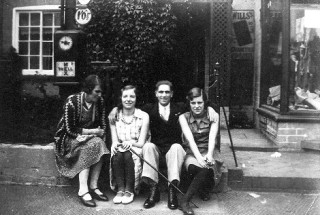 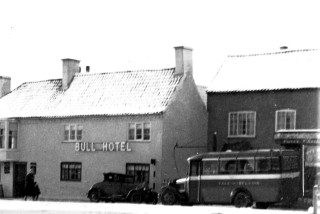 A Randell's bus outside the shop 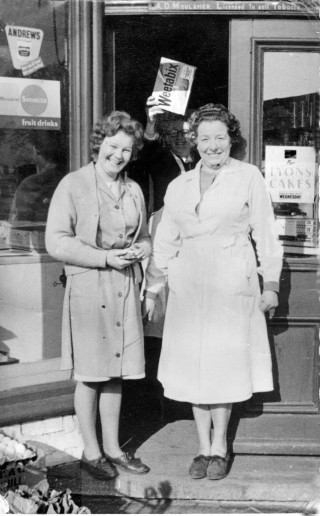 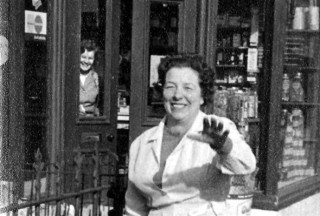 Mrs. Moulsher outside the shop 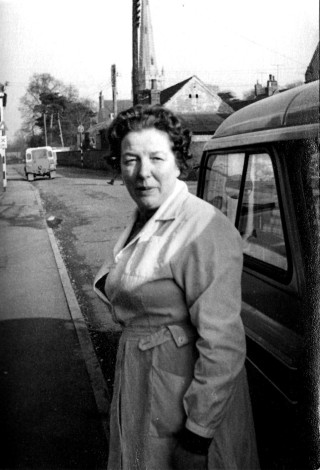 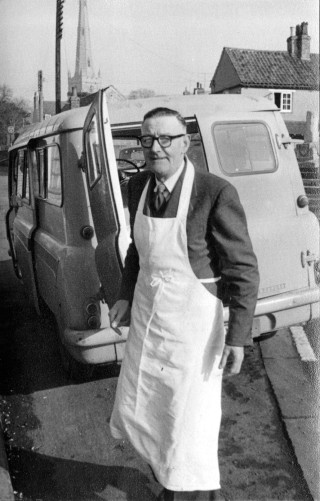 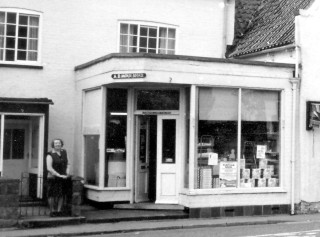 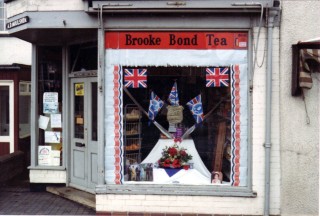 The Shop Decorated for the Queen's Jubilee 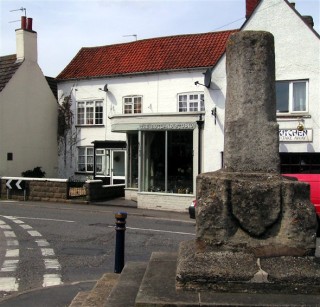 Moulsher’s shop was situated on Market Street, Bottesford opposite the Cross, where the Antique Shop, Rutland Studio, can be seen today. The shop and house formerly belonged to Randells, who owned the Bus Company. There was a double garage at the back of the house to house two buses.

The shop was open six days a week, 9-1pm and 2-6pm , Monday to Saturday, with half day opening on Wednesdays. The following is a description of the shop in the 1950s, a nostalgic look back at a time before the advent of the supermarkets.

A lot of food needed preparation prior to being sold at the shop counter. Danish butter came in a loose round slab and had to be cut, weighed and packed in grease proof paper. Morrell lard came in a square shape and also required the same treatment. Red/yellow cheeses came in rounds, and a wire cutter was used to slice the cheese, before weighing to the customers requirements. Margarine was wrapped in greaseproof paper, initially printed in brown ink, before the margarine had its own labels, such as Echo and Summer County .

Sides of bacon had to be deboned before being placed on the bacon slicing machine. Hams also had to have the bones removed before being rolled, tied up and boiled in a large pot.  Corned beef had to pushed out of their large tins and sliced by hand.

Dried fruit (raisins, sultanas and currants) and sugar were weighed and bagged separately in blue bags, before being sold.

Representatives from all the different food companies, such as Brook Bond, Lyons, Needlers etc. would visit the shop; orders would be taken and travellers would deliver the goods, or they would be dispatched by van.

Near the till were the cigarette and tobacco brands. Some cigarettes like Woodbines came in packs of 5s. Other brands included Players Weights, Players Navy Cut, Senior Service, Park Drive and Craven A. Tobaccos included Gold Flake, Redbreast, and St. Bruno, as well as matches. There was no age limit in buying cigarettes.

There was a glass fronted bureau with brass handles, which stored the biscuits; tins of Carr’s biscuits would slide into the shelves at the side and biscuits were sold loose by the half pound and pound weight. Mothers could buy Farley’s Rusks for the little ones.

There were popular tinned foods, such as Heinz soups and beans, condensed and evaporated milk, processed and garden peas, Tarantella tomatoes. Tinned fruit was a good seller, sold in large and small tins. Shipham’s fish and meat pastes were sold in small jars.

Brook Bond Dividend tea and PG Tips were the well known brands. Camp coffee was a favourite and Nescafe was also sold.

HP and Daddy’s sauces were available in bottles. Vinegar was in high demand at certain times of the year; it could be bought by the bottle and there was a large barrel of vinegar in storage to refill bottles.

KittyKat cat food and Chappy were available for customers pets.

Mandora orange was popular and there was money back on the bottle if it was returned to the shop!

Eggs were brought from Knipton, loose on a big tray and each egg was stamped with a lion. At one time Mr Moulsher sold rabbits obtained from the keepers at Stoke!

Fresh produce, in season, such as lettuce, cucumber, tomatoes, radishes, and spring onions came from Howitts at the Vineries, Bottesford, daily.

Potatoes and green vegetables came from Sterne Austin, in Grantham. There was not a wide variety of fruit, mainly apples and pears, and oranges on special occasions. Bananas came in large wooden boxes nestling in straw; oranges were packed in wooden boxes also, with a wire band around that had to be cut away with a wire cutter.

Moulsher’s was the first shop in Bottesford to sell Pork Farms pies and sausages. There were deliveries of Colton’s cream cheese and milk cheeses before yoghurts were introduced into the shop. Milk and bread was not sold because they were delivered locally. Moulsher’s did eventually sell a sliced bread called Wonderloaf.

A small freezer was installed near the door; Walls ice cream in blocks and individual brickettes were stored here, vanilla and later strawberry and Neapolitan flavoured. Wafers and cornets were stored nearby.

There were 2 shelves for household goods, such as steel wool, yard brush heads, floor mops and cloths, and Zip Fire Lighters.
Men could buy shaving sticks and 7o’clock razor blades.

Another shelf would store medicinal goods such as Alka Saltzer, Milk of Magnesia, Aspro, Vick Vapour Rub, Vaseline, Syrup of Figs, and Beecham Powders. You could wash your hair with Silverkrin and Vosene.

Regular customers had order books. When food was in short supply, these customers had priority of service. Mr Moulsher would take orders in his van to Muston, Sedgebrook, Woolsthorpe, Harston as well as Bottesford twice a week, delivering groceries and picking up the order books. All the goods were added up by hand; and the till was opened by a push button. If customers could not pay immediately, then it would be added to the order book, and settled the following week.

The scales in the shop were old fashioned flat scales with brass weights, which were polished until they shone. From time to time a Weights and Measures man would visit to test the scales.

The village shop occupied a period before plastic bags, mass advertising, packaging, and instant meals. A time when the majority of customers walked instead of driving to the shop; when fresh food could be bought locally; when food could be obtained on credit. It was a place to socialise while waiting in turn to be served. Finally it played an important support role, similar to that of the milk man, supplying groceries to those who were unable to leave their homes.

Mr Moulsher was in business for at least 40 years.