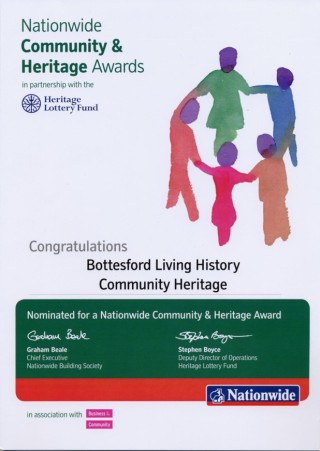 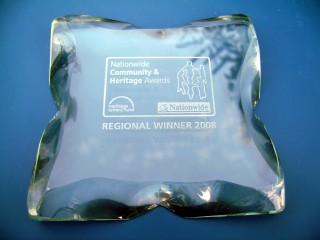 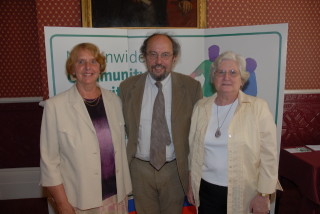 Each year, the Nationwide Building Society makes awards to “individuals and groups who give their time and energy to …. the community“.

This year, the Bottesford Living History Community Heritage Project has been selected as East Midlands regional winner in the Heritage-Groups category for 2008.

This is an unexpected and most welcome accolade, and we wish to thank those who were so generous as to nominate us. The project is made up of a group of people who all give their time as volunteers. None are professional historians. They all deserve to be thanked and congratulated for their patient work. We also want to say thanks to all the people who have given us their knowledge and memories, copies of photos and other heirlooms, and their enthusiasm, support and guidance. Without your participation the project would have sunk without trace. As it is, we have come a long way in less than two years, and hope we are succeeding in giving a bit of pleasure as well as adding something to the local history of the East Midlands.

We also wish to thank the Nationwide. In addition to running their awards scheme, they gave the project a Local Heritage Initiative grant that enabled the drama “A Grand Day Out or Mr Dewey Takes Charge” to be staged back in May. Their support for local communities is greatly valued and deserves to be widely recognised.

The award was presented on the 29th July at the Galleries of Justice in Nottingham.