You are here: Home>Tags>Archive>Bottesford Local History Archive>Heraldry at St. Mary the Virgin, Bottesford 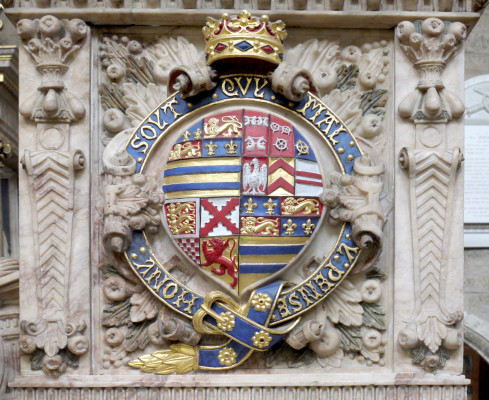 The shield of John, 2nd Earl of Rutland, as displayed in the panel mounted on his tomb in St Mary's. The shield is enclosed within the belt of the Order of the Garter and surmounted by a baronial crown.
Neil Fortey

These photographs are of the Heraldic Achievements displayed the tombs of the Earls of Rutland in the Chancel of St Mary’s, Bottesford. They reflect the genealogical origins of the lords of Belvoir Castle since the days of the Norman Conquest. In that time there have been only four families at Belvoir, all related by marriage:

One of the most interesting images on display is the St Ledger Coat of Arms. Anne Plantagenet, sister of Edward IV, Richard III, George Duke of Clarence and Edmund Earl of Rutland, married as her second husband Sir Thomas St Ledger. Their daughter, Anne St Ledger, married Sir George Manners, Lord Roos, and their son Thomas Manners was created the 1st Earl of Rutland (Second Creation) by his second cousin Henry VIII.

The present family name at Belvoir is still Manners and has been so for over 500 years.

Despite our investigations, some of the emblems remain unidentified, and we invite visitors to contribute information where applicable.