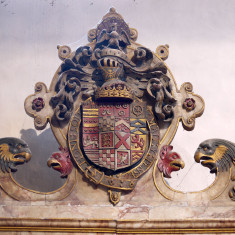 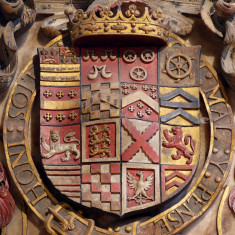 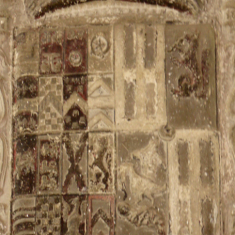 Heraldic shield of the 3rd Earl of Rutland, as displayed at Helmsley Castle, Yorkshire.
Neil Fortey, 2014

This shield is mounted on the tomb of Edward Manners, 3rd Earl of Rutland, and Countess Isabel (nee Holcroft). The Holcroft arms are not shown on this shield, which is entirely given over to the Earl’s pedigree.

The key the shield is as follows:-

Second row (left to right): Beauchamp (Earl of Warwick); Bellomonte [Newburgh]  – this badge was identified differently as ‘Newburgh’ in an earlier heraldry study of Belvoir. The explanation is clear, in that Bellomonte is an old or latinised form of Beaumont, and this great family was associated with a lordship in Normandy called ‘le Neubourg’ which was owned by Henry Beaumont, 1st Earl of Warwick, who was alternatively known as Henry de Newburgh; Berkely; Lisle.

The third image shows the 3rd Earl’s shield as displayed in the over-mantle of the living quarters of the Manners family at Helmsley Castle, Yorkshire, emphasising the fact that both Belvoir and Helmsley were regular homes of the Earls and their family. Helmsley was the original base of the barons de Roos, who preceded the Manners.