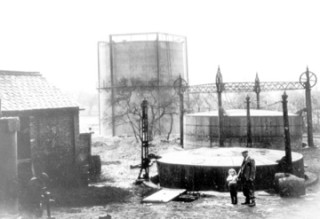 Ian Norris recalls how he and his brother’s play contributed to the family economy during the 2nd World War. His older brother, Bernard, liked to make trolleys with pram wheels scavenged from the village tip next to the Bottesford Gasworks on Normanton Lane. These trolleys were regularly used for transporting coke purchased for 6p a load from Mr Markham the Gasworks Manager. They devised a plan to increase the efficiency of their coke carrying capacity whilst not stretching a household economy supporting a family of eight children. A train of trolleys was connected together. This was then hauled to the gasworks. However the journey from the High Street was carefully timed to arrive just before Mr Markham’s routine lunchtime visit to the Rutland Arms at 12.00pm. Then the second part of their plan would be set in action.

“We’d stop out of sight of the gasworks and disconnect the lead trolley which was then pushed round the corner to Mr Markham’s house. He’d answer and charge us the 6p to load the trolley. Being in a hurry to wash off the grime of the morning’s work before walking to the pub he’d tell us to go and fill it ourselves. This we would dutifully do after having reconnected all the other trolleys. The trick then was to make the fully loaded return journey whilst avoiding his route across the wooden bridge by the Church. We would turn right down Devon Lane and head off via the Green and the back way down Albert Street. No questions were ever asked at home concerning the well-stocked coke pile and the coke train ran to a regular timetable.”

Drying times
Ian also recalls that children in the village put the warmth of the coke ovens to good use. The Devon was a favourite place to play at any time of the year. However, if you arrived home with wet clothes and shoes “you would be in for it.” The remedy was to return via the gasworks where you could dry off before the journey home. They would also watch the opening of the coke oven door. This had to be timed to perfection. Heat the coal too long before raking out the coke and all that was left was dust. The flare of flame, as Mr Markham cracked open the clay-sealed door, made a vivid impression.