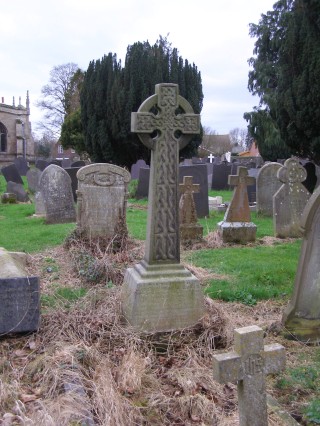 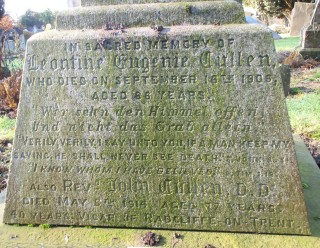 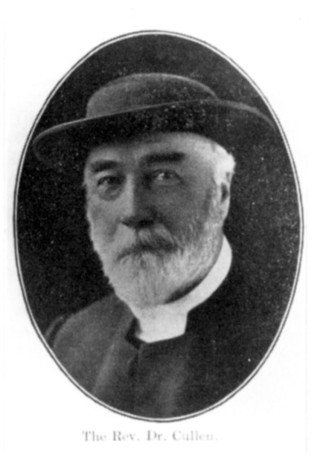 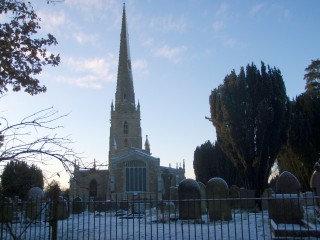 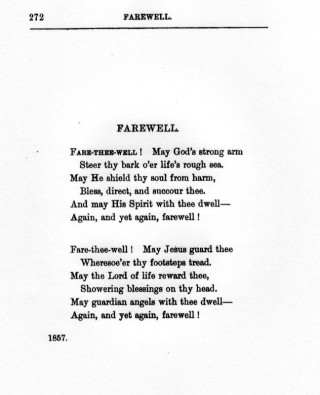 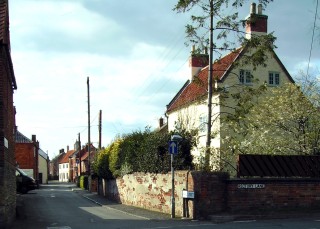 The Glebe House, or The Manse, Bottesford,where John Cullen lived, stands on the junction of Rectory Lane and Chapel Street

John Cullen, clergymen and poet, is buried with his wife and infant son in Bottesford Churchyard. He was born and educated in Ireland. From 1867 – 1869 he was curate at Knipton, where he married a German woman, Leontine Dordinger. In 1869, he became Canon Norman’s curate at Bottesford and published Horae Poeticae, a collection of poems he had written in his youth. The 1871 census records John Cullen as living with his wife and 8 month-old daughter, Evelyn, in Chapel Street, presumably at the Glebe House, or Manse. They employed one servant, Eliza Challands, from Muston. The Cullens had three children, but one, Frederick Adelph, died in 1872, when only six months old. He was buried in Bottesford. This is presumably why Leontine Cullen, who died in 1906, and later John Cullen himself, were buried here.

In 1874 John Cullen became Vicar of Radcliffe on Trent, where he remained until his death in 1914. He continued to write poetry, but locally was more famous for his forthright personality and energetic evangelism. He established several missions in the area, rebuilt and enlarged St Mary’s, Radcliffe and campaigned for better public health after the deaths of a large number of children from scarlet fever, unintentionally making the village the focus of negative publicity. His parishioners remember his white beard, flat, clerical hat and the wicker-sided trap he drove.  He was generally regarded as a benevolent, patriarchal figure.

Apart from Hymns and Sacred Songs, Cullen wrote poetry in a range of forms. The blank verse debate/drama, Ian and Edric is set variously on the seashore, in a Swiss Valley, in a large saloon, on the banks of the Trent, in Hades and in Paradise:

The influence of Wordsworth is clear in the rustic narrative The Harvest Bride, or An English Idyll

It had been hot and sultry all the day

But now the heat was less; a pleasant warmth

Filled all the air, and a refreshing breeze

Was rushing through the woodland yellow leaved …

Home from their work in yonder harvest-field

Walked Farmer Dyson and his only son …

He also wrote a mini-epic in cantos:

Was heard afar and near

And Famine, with her wolfish eye,

And heard the hungry mothers’ cry,

Whom their own children fear

and an historical Lay, reminiscent of MacCaulay:

The Lay of Forty Roman Martyrs

Cold winter blows the North wind across a frozen lake,

Where forty naked warriors brave are bound to a cruel stake

No food, no clothes are left them, the snow is falling fast,

Their naked bodies quiver, they feel the biting blast.

and lyrics, for example:

His poetry is perhaps most interesting for the light it throws on the thinking of a Tory clergyman struggling with current political changes:

The rights of man I preach, a radical

Am I. No narrow Tory here shall speak.

The Railway line has put its brake on Squire,

They rule no more! We are the people now…

Have with their lot. It urges them to seek

By earnest work, and honest rivalry,

To better their condition. And there is

All Cullen’s verse is imbued with deep religious feeling. None is in print today. Poems and Idylls was published in 1882 and 1893, with a collected edition in 1904 which went into several editions. He describes his aims in the foreword as: ‘to point out the beautiful in nature … to cheer desponding hearts by singing of our Father in heaven … to teach to all the beauty of love … and to find good in everything.’

Cullen achieved a degree of national and international recognition when his poem Queens Regnant, written for recitation at Baltimore Female College in the United States, was published. Queen Victoria thanked him for his work and in America he was hailed as champion of women’s rights and congratulated on his ‘conceptionof the power and high calling of Christian womanhood‘. In his notes on A Vision of Good Women he wrote:

He is still considered to be a figure of sufficient importance to merit an entry in The Dictionary of National Biography.

Cullen’s poem of farewell to his sisters when they emigrated to Austalia in 1858.