More about The Green

Responses to our request for information 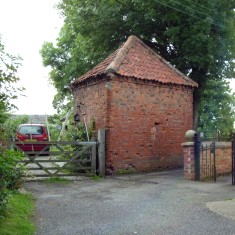 Picture 2. Is this the outbuilding seen in picture 1? 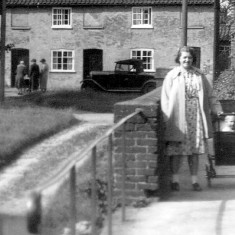 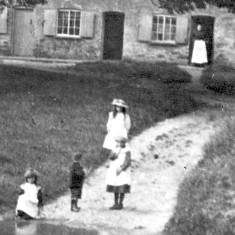 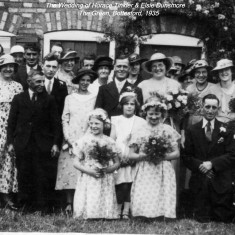 The Wedding of Horace Tinkler and Elsie Dunsmore, The Green, 1935. Kneeling front right: Connie and Arthur Guy. End of 2nd row, left: Mr. Skinner. End of 4th row, left: Thomas Waudby. Just visible at the very back in front of the window: Henry and Frank Dunsmore. Next to the Groom, left: Annie Dunsmore (nee Ricketts). Back row, visible between the Groom and Bride: Louisa Ann Dunsmore (nee Bellamy). Back row, third from right, in white hat: Betty Whatton (nee Waudby). Between the two bridesmaids, centre: Margaret Waudby, aged 8. We can add, thanks to Jean Rigby, that the gentleman second from left in the third row is Martin Killeen, and the lady to his left, wearing a hat with a diagonal ribbon, is his wife Mabel (nee Tinkler). 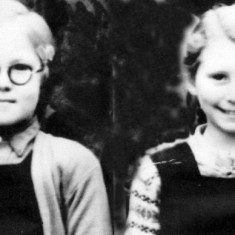 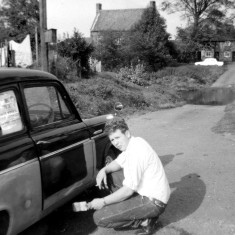 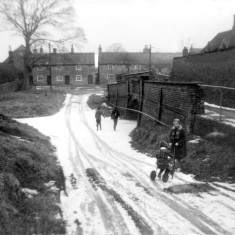 When the gallery of photographs of The Green Past and Present was added to the Living History site, we asked for information about the people who lived there. We were delighted to receive this picture (picture 1) from David Tinkler and to hear from Cathy Dawson and her mother, Janet Peet (nee Tinkler), and from Brenda Turier (nee Sellers). Recently we have been able to add to this gallery, thanks to Sue Dunsmore, who has allowed us to publish this evocative picture of a Dunsmore-Tinkler wedding in 1935, and Ann Hewitt, who has supplied two more vivid scenes from the 1960s.

Picture 1 shows David Tinkler with his grandfather, Herbert Dunsmore. Mr. George Repton, a friend, is on the right. Mr Tinkler lived in one of these cottages until he was sixteen. We think the picture was taken on the grass in front of the cottages at The Green and that the building in the background is the outbuilding seen in  picture 2, taken today.

Mrs. Peet tells us that her grandfather, Herbert Dunsmore, owned the three cottages. The family lived in the end cottsge. In picture 3 the people outside the cottages are her grandparents and her mother. The lady in the doorway of the cottage in picture 4 is probably her great grandmother, Annie Dunsmore. The children are likely to be Mrs. Peet’s mother, Elsie and her sisters, Lucy and Ethel. The boy could be one of their brothers, Frank, Charles or Henry.

In picture 3 the lady on the left of the two on the bridge is Louie Dunsmore, wife of Frank Dunsmore and the baby in the pram is either Mrs. Peet herself or her brother, David.

Mrs Peet’s mother, Elsie Tinkler (nee Dunsmore) was a member of the operatic society and had a fine soprano voice. She can be seen in our pictures of the Operatic Society’s performances of The Mikado and H.M.S. Pinafore.(Topics Drama Event).

Mrs. Peet was born in the cottage in 1940 and lived there until 1959. Her grandfather lived in the end cottage on the right and the left hand cottage was rented by Mrs. Johnson. Later the two cottages were made into one.

Mrs. Turier tells us that her grandparents, Mr. and Mrs. Sellers lived in one of the cottages and that she ( Brenda Sellers) used to play with Janet Tinkler.