You are here: Home>New contributions>Evelyn Box, from Hampshire to Bottesford

Evelyn Box, from Hampshire to Bottesford

Family history in pictures and postcards 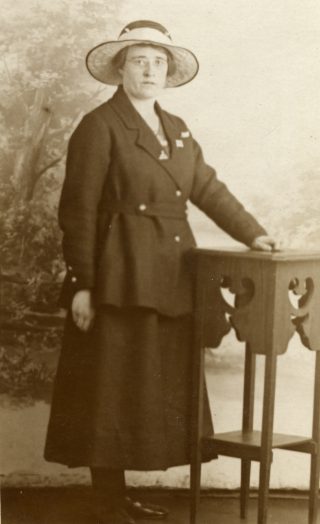 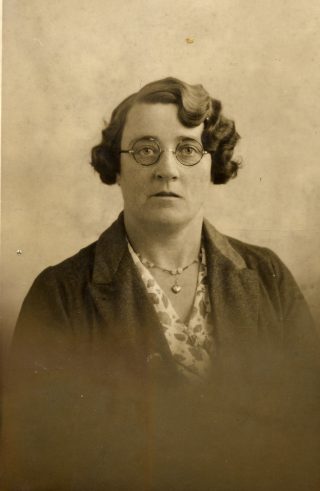 A second postcard photo: scribbled on the back is "Poss Granny Marston, Vic and Frank's mum. 23rd June 1934."
From Janet Dammes' family archive. 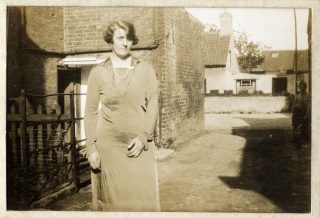 Evelyn Marston in the alleyway between her home on the right and the end of Queen St Mill on the left. In the background is Queen Street and on the far side part of Tappins cottage, where the lean-to was used as a fish and chip shop at one time. None of these building are still standing. 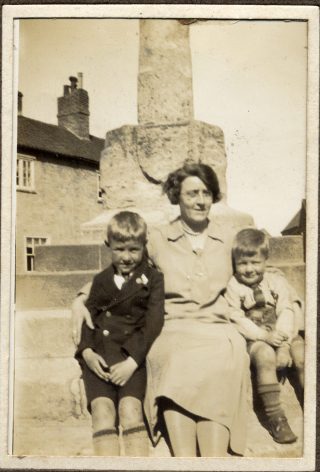 On the steps of Bottesford market cross, Evelyn Marston with sons Vic on her right, and Frank on her left. Mid-1920s.
Janet Dammes 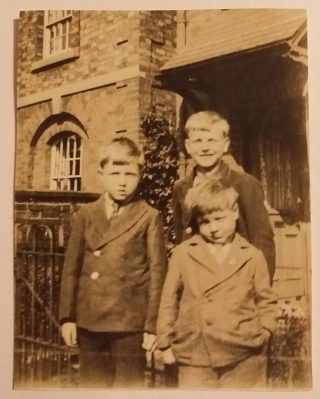 On Queen Street, May 1931, the three Marston boys, Vic (10), Frank (8) and John (about 6). Behind is part of the former Bottesford police station, built in the 1850s, and the first of the terraced cottages next door.
Janet Dammes 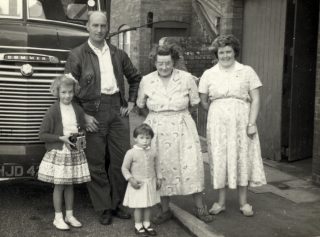 Family photograph albums preserve memories of our past and of people we knew and loved. When Janet and Brian Dammes kindly allowed us to borrow their collections two years ago, it was sheer pleasure to examine their trove of family and local history. There were three sets of pictures.

Postcards and Box family pictures – the first collection [BOT173] consisted of postcards and family pictures from the years before, during and after the Great War, which had been preserved by Janet’s grandmother, Evelyn Marston, nee Box. This also included a soldier’s souvenir from France, a tiny matchbox containing tiny photo prints of wartime leaders, images  of which have been added to our archive

The Marston family – the second collection [BOT177] comprises Marston family album pictures from the 1930s up to the 1970s. Some of these show features of the village that no longer exist.


Stenwith Lockhouse – the third collection [BOT196] is a series of pictures of the old Lockhouse which stands by the Grantham Canal at Stenwith, taken in the spring of 2007. Janet’s husband, Brian Dammes, is related to the Damms (without the ‘e’) family who lived there for many years. The bachelor brothers Sidney and Ronald Damms stayed there after other members of the family had died or left home. The last was Sidney, who in 2007 was on his own, aged 92, and following illness had to leave the old home and move to a Care Home in Sleaford where he died in 2010, aged 95. Half of the Lockhouse pictures were taken by Mrs Margaret Langton in 2007 (prints of them were in photo albums lent to us my Mrs Dammes), while the other half were taken by the present author on a sunny day in 2007 when Mrs Langton took him to see the old house which had recently become unoccupied and whose future looked uncertain (happily it has survived the years of neglect which followed and is now being renovated). We are very grateful to Mrs Langton, who cared for the Damms brothers in their declining years, and to Janet and Brian Dammes for making the pictures available to the Bottesford Local History archive.

Evelyn Box (‘Eve’) and her family came from Hampshire, but moved to Aslockton between 1904 and 1911. We know that between 1911 to 1921 she lived with her parents at Aslockton, after which she worked as a domestic servant at addresses in West Bridgford and the Vale before marrying Arthur Marston in 1921.

Evelyn Box was born in 1899 at Bishops Sutton, near Winchester in Hampshire. Three generations had lived in the county since James Box (born in 1814 at New Alresford) married Hannah Burgess (b.1815) in 1836 at New Alresford. Their grandson, Evelyn’s father, was Henry James Box (1873-1947) who married Mary Louise Brown (1874-1945). He was a horseman who earned his living as a jockey. It seems that he moved more than once to where a job was available. By 1904, the Box family had left Hampshire and moved to Ivinghoe, in Buckinghamshire. Records from Ivinghoe Aston National School show four of the Box children, Harry, Fred, Evelyn and Victor, being admitted on the same day, the 22nd February 1904.

By 1911 the Box family had moved again, this time to Aslockton in the Vale of Belvoir, where Evelyn attended the village school. Her father Henry James Box was still registered as a jockey. There were six children at home: Frederick, Evelyn, Victor, Livorna (also known as Winifred), Reginald and Louis. Their oldest, Henry James, now aged 16 (b.1894), was also close by, living-in and working as a farm boy for Richard Brown at Brocker Farm, Aslockton. He went on to serve in the 10th Battalion, Lancashire Fusiliers, and was lost in action on the 12th October, 1918, fighting near Cambrai in France. The second boy, Frederick, was aged 14 in 1911 and working as a groom.  He went on to join the Army Service Corps, and survived the war, marrying Dorothy Drew Frisby in 1920. They emigrated to Canada, and he died in Calgary. The third brother, Victor Robert (b.1900), had the rare experience of joining the RAF on the 5th November 1918 and being discharged a mere 13 days later on the 18th November, presumably no longer needed following the armistice. He also emigrated to Canada in 1920, married Agnes Hellebrand, had three sons, and died in 1968 in Saskatchewan.

Evelyn (‘Eve’) stayed in England. During the war years and until she was married she was employed as a domestic servant at a series of addresses some of which are revealed by the postcards she received. The postal dates, where legible, range from 1913 to 1926, this latest being a photograph of the newly completed Menin Gate memorial at Ypres in Belgium. In 1913, Eve was working for Mrs Clarkson at Hawksworth Rectory; in 1918 at 30 Loughborough Rd, West Bridgford; at other times working for the Whyte family at 158 Musters Road, West Bridgford; at another date she was at 92 Holm Rd, West Bridgford; in 1919 she was at Orston. There is also a postcard of Elton Manor, undated, which was another of the places she worked: this card shows a rare picture of the handsome late-Georgian building, since demolished. There are also postcards of Skegness, a popular holiday resort both before and after the war,a picture of the Tennyson family’s house at Mablethorpe, a picture of the Old Market Square, Nottingham, when it really was a market overlooked by the old town hall, and a picture of hand-shearing of sheep in farm land (location uncertain).

Evelyn married Arthur Marston on the 26th March, 1921, at St Giles parish church, West Bridgford, Nottingham. At the time, she had been living in Musters Road, West Bridgford, her last place of employment. After they married, Evelyn and Arthur Marston moved to a cottage in Queen Street, Bottesford, where they lived for many years. They had three sons, Arthur W.H.V. (known as ‘Vic’), Francis (‘Frank’) and John, and one daughter, named Daphne. Arthur Marston was a First World War veteran who had served as a Private in the 2nd Battalion of the Royal Berkshire Regiment.

The 1939 England and Wales Register reveals that at this date the Marstons were living at “Westways”, Pinfold Lane, Bottesford, where there were Arthur, Evelyn and their second son, Frank (born 28/12/1922) at home. Both men were employed as “horsemen on a farm”. Evelyn’s parents had also moved from Aslockton to Bottesford. At one point, in 1931 they lived in Queen Street, at the end of the row of terraced cottages right next to where the old police station. Then, by the time of the 1939 Register was taken, they were living at the High Street, next door to builder Horace Doubleday, Henry still describing himself as a “stud groom”. Mary Louise Box died in 1945, aged 71, and was buried on the 17th April at St Mary’s, two years before her husband, who was buried in the same grave at St Mary’s on the 10th June, 1947.

Vic Marston (born1921) served in the RAF during the second world war, serving in india and, by the end of his time overseas, at Pegu in Burma (now Bago, Myanmar).This was the site of the Battle of Pegu, March 1942, between the British Indian Army and the Japanese Army, but is unclear what his role might have been in this engagement. Janet recalls that he was a driver/chauffeur, and also used to recover crashed aircraft. He married Dorothy Andrews in 1946, and they settled in Hull, as that was where she was from. Janet adds that “they had one daughter, called Janet (not me!)”.

Frank Marston married a former Land Army girl, Gladys May Monk, in 1948: in 2008 she received a medal and certificate signed by Prime Minister Gordon Brown recognizing her war service. Frank, born 1923, was 25 when he married. They lived at Riverside Cottage, Bottesford, and then moved next door to Providence Cottage in 1960, where he built the wooden garage still standing at the end of Church Lane on land which had formed part of the Cottage’s garden. They had two children, Geoffrey James, and Janet who lent us these pictures.