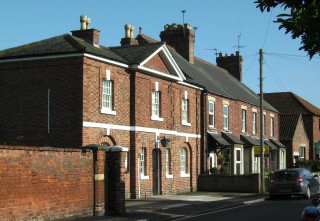 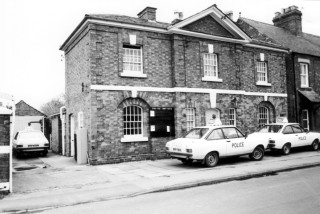 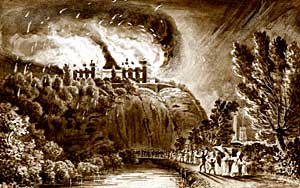 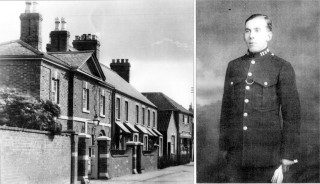 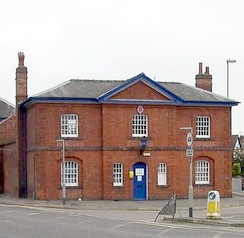 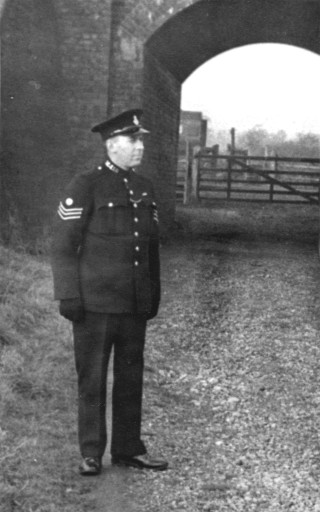 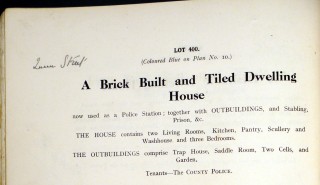 On November 17th, 2010, Leicestershire Constabulary announced the closure of a number of police stations, including Bottesford’s Police Station (English Heritage Grade 2 listed), which has been the centre for policing the village and surrounding Vale communities for over 160 years.

The dates given for the building of Bottesford Police Station vary from 1842 to 1846, but it was built to the same design and at about the same time as Lutterworth Police Station, which claims to be the oldest purpose-built operational police station in Leicestershire, and probably in the country.

In recent years Bottesford Police Station has been a neighbourhood police office, used as a base for officers to start and finish duties and open to the public three times a week, but if Lutterworth is indeed the oldest working police station in Leicestershire, then it seems likely that Bottesford is the oldest village police station still in use in the county.

Explaining the reasons for closure, Assistant Chief Constable Stephanie Morgan said: “our policing style can now be more flexible, allowing officers to be more accessible and visible in the community, working from a variety of locations without being tied to large buildings which also incur expensive maintenance costs … we are seeking opportunities to find alternative premises which are better placed in the community – places which the public frequent every day. Current buildings will not be vacated until suitable alternative premises are found.”

The 1839 Rural Policing Act allowed for the organisation of county police forces and the Leicestershire Constabulary, established in the same year, was one of the first in the country. Four police stations were built between 1842 and 1846, in Lutterworth, Hinckley, Melton and Bottesford. The architect was probably County Architect William Parsons. Of these early purpose-built police stations, only Lutterworth and Bottesford survive.

The 1830s and 40s were a time of considerable social unrest in the Midlands, provoked by low wages, bad harvests, high prices and widespread unemployment, particularly amongst framework knitters and lace workers. The increase in unemployment lead to the passing of the widely resented New Poor Law of 1834, based partly on the ideas of the Rev. Robert Lowe of Bingham.

Nottingham was a centre of Luddism and Chartism. In 1831, a radical mob set fire to Nottingham Castle following the defeat of the Second Reform Bill. On October 11th, 1831, the Duke of Newcastle, one of the leading opponents of reform, wrote in his diary; “the mob were outrageous and impelled by the worst spirit. They have vowed the destruction of many large houses – Belvoir Castle they declare that they are determined to destroy … The whole country is in a horrid and fearful state.”

The devastation of Belvoir Castle by fire in 1816 was believed to have been the work of arsonists and the Lord Lieutenant of Leicestershire, John Henry Manners, 5th Duke of Rutland, was no doubt anxious to protect his new castle from a second arson attack. Unrest continued into the “hungry forties”, further inflamed by disillusionment with the 1832 Reform Act. The Rural Policing Act gave the authorities the means to tighten control in the countryside.

In 1842, 400 Chartists were arrested in Nottingham. In Leicester there was a vigorous anti-corn law movement and a militant non-conformist crusade for the disestablishment of the Church of England. In 1842 there were strikes, mass meetings and rioting.

It was against this background that Bottesford, on the turnpike from Nottingham and the largest settlement close to Belvoir Castle, got its police station.

The police station actually belonged to the Duke of Rutland, presumably having been built on his land at his expense, until 1920, when a large part of the Rutland estate had to be sold to meet death duties.

In 1839 Frederick Goodyer, formerly of Peel’s New Police in London and Leicester Borough Police, was appointed Leicestershire’s first Chief Constable. Frederick Goodyer complained of the dilapidated and insanitary state of the parish lock-ups, where they existed at all: “a lock up is much wanted at Bottesford and in many other parts of the county …”, he wrote. According to police historian Clifford Stanley: “It was not until 1842, … following the intensive efforts of a station house committee, formed in January 1841 … that a new Police Station was built at Bottesford. A year later new police stations were built at Melton Mowbray … Lutterworth and Hinkley”

The new “Rural Police” consisted of 6 Superintendents, one for each Hundred, and 18 constables on a pay of 18 shillings a week, for which they worked a fourteen or sixteen hour day seven days a week. One officer who joined the constabulary in 1853 recalled: “When I first joined the Leicestershire police we wore the old Peeler’s uniform – a long-tailed coat and a top hat. Instead of a whistle we carried a wooden rattle. Not that it was much good rattling or calling for help in some of the quiet country districts … “

Country districts were not always quiet and the locals were often hostile to the new force. In emergencies, like the Chartist demonstrations, the police were armed with cutlasses.

Clifford Stanley describes the conditions of the time: “In 1839 the county was in a very disturbed state. There were numerous housebreakers and the roads to the markets were dangerous owing to footpads … Highwaymen harried the countryside. Shooting outrages, obstruction of watchmen and sheepstealing – a capital offence until 1872 – were commonplace … the streets frequently exhibited the most disgraceful scenes of drunkenness …”

Bottesford’s police constable, John Iliffe, attempted to prevent a prize fight in an adjacent village: “a crowd of roughs who had assembled to see the fight … pulled and jostled him about until his tunic was ‘a thing of shreds and patches’ “. Despite this, P.C. Illife stopped the fight single-handedly and was awarded a gratuity by the magistrates.

We are fortunate in having several accounts of life at Bottesford police station in the twentieth century. Diana Pearson Vale’s memoirs of her father, Sydney Smith and her grandfather, Inspector Arthur Smith, give a vivid picture of police work during the First World War, together with diagrams and descriptions of the station itself.

The family of Sergeant Arthur Ernest Bradshaw have contributed a wealth of memories and photographs to the Bottesford Living History Website. Recollections of Post War Bottesford, by his son Michael Bradshaw, now of Adelaide, South Australia, are abridged as follows:

My father came to Bottesford first in 1929-30, as a new Police Constable, seconded to the Police station in Queen Street where, as I understand, the senior officer was Sergeant Allen. My father was born and raised in Loughborough, and his initial training had been in Hinckley, Leicestershire. Being a single person, he obtained lodgings at The Six Bells in Church Street, the home of the Bateson family. Mrs Ada Bond (née Bateson) remembers fondly my father staying at her home when she was a small child. I’m not sure exactly how long he was in Bottesford for the first time, but after this initial posting he returned to Market Harborough, and subsequently met and married my mother Vera Bradshaw (née Pitts), from Great Bowden, Leicestershire. During the war years they lived in Police Married accommodation, firstly at Hallerton, then until 1948 at Tilton On The Hill. Early in 1948 he returned to Bottesford as a Sergeant, accompanied by wife and three children, and stayed until he retired.

The Police Station was our family home as well as the Office. We took turns to pump up water into a large tank in the roof, using a hand-operated pump on the wall in the kitchen, a marker above the pump indicating when the tank was full. The well was in the living room with an inspection lid in the floor, and may still be there beneath the floor of the present-day police station. Other jobs like chopping sticks, and fetching in the coal, were all shared and pocket money handed out at regular intervals. The area where the coal was stored was originally the old Lock Up. I remember my father on several occasions getting a movie projector and showing old films by Laurel & Hardy, Mickey Mouse, Old Mother Riley, and Abbot and Costello in the large hallway in the centre of the house.

The driveway of the Police Station was well used as the cricket pitch for local lads throughout long summer evenings, 6 and out if the ball was hit over the gates at the end, or over the wall into Mr Taylor’s garden. On one occasion I hit a ball over the gates, over Queen Street, and through the open bedroom window of Mr Brewster’s house opposite. Unfortunately the blind was down, and the ball passed through leaving a large hole. I was 6 and out, banned from cricket in the yard, and had to pay for the damage with my hard earned pocket money.

We would very much like to hear from anyone who can add to our knowledge of the police station and policing in Bottesford.