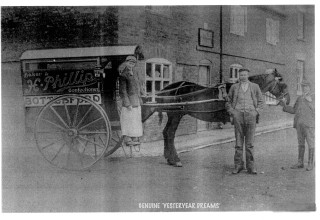 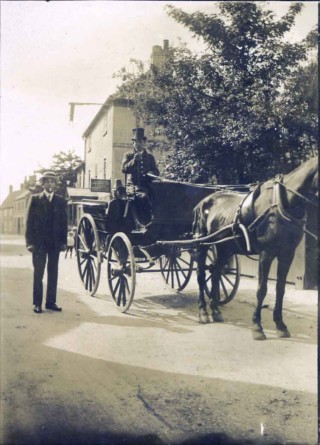 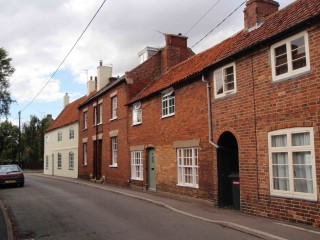 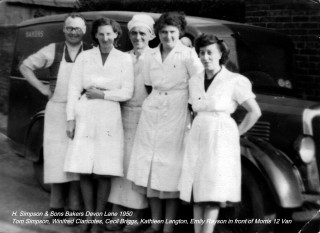 H. Simpson and Sons Bakers - staff outside the bakery on Devon Lane, Bottesford in 1950. 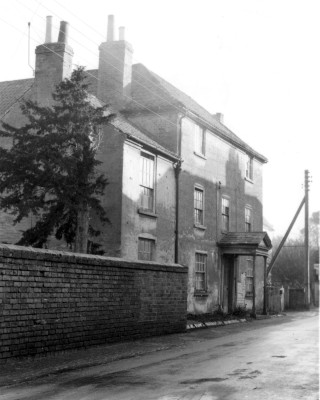 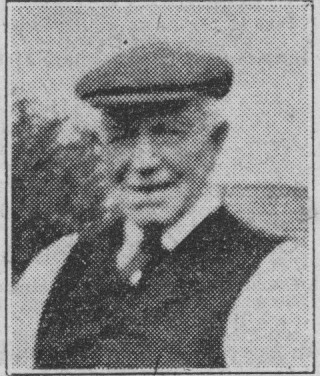 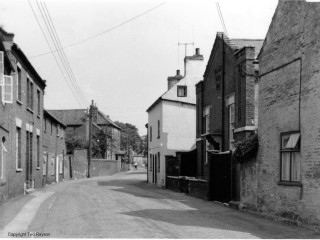 The Chapel and Rutland House before conversions 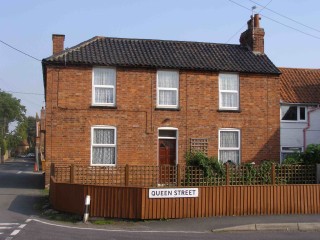 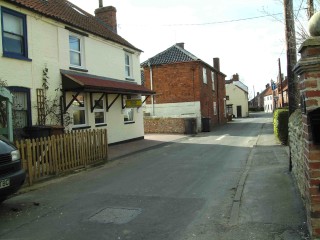 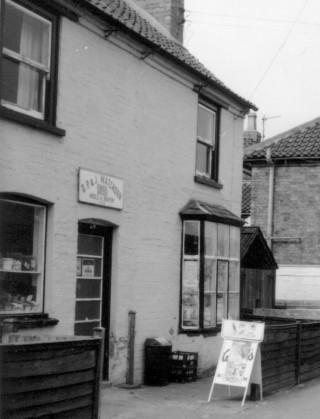 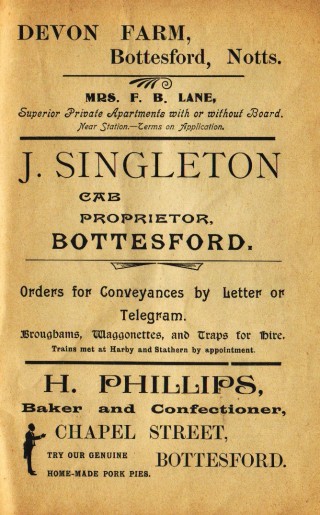 The west end of Chapel Street did not exist as a road before the houses on The Square were built after the 2nd World War. It was a lane through to Albert Street, called Back Lane. The Square was built on a paddock where the horses and carts belonging to the bakery of J.D. Phillips were kept.

Victor Marston (son of Arthur Marston) remembers that when his mother was working at the Bottesford laundry in Queen Street, washing would be laid out to dry, on the grass and bushes as far down as the River Devon.

On the north side of Chapel Street, at the corner of Devon Lane, the house known as The Old Bakery was originally a bakery. According to ‘A Little History of Bottesford’ the building became a bakery when William Billings Lane moved his bakery from premises on the corner of Chapel Street and Queen Street. The previous owner of the property had been Mr. Fisher who owned a horse and wagonette business.

William Billings Lane died in July 1900. In the 1901 census a baker from Nottingham, named Everitt Atkin was working at premises in Chapel Street.

The bakery on the corner was taken over by John Henry Phillips who was baking bread, pork pies, and Christmas cakes in 1908. He was also willing to bake foods brought to the bakery by villagers. Mr. Cecil Briggs lived on The Green and worked as a baker for Mr. Phillips in the late 1920s.

Mr. Phillips had an entry, as a baker, in a directory of 1941 but by 1946 the Simpson family from Cropwell Bishop had taken over the bakery. Thomas F. Simpson was a master baker and when he moved into the bakery, he found that a domed oven (shaped like a cupola) had to be replaced by double-decked steam piped ovens, fuelled by coke from the Bottesford gas works. Mr. Elliott managed the bakery until 1948 and Mr Cecil Briggs continued to bake there. Members of the bakery staff included Win Claricoates, Herbert Turner, Kathleen Langton and Emily Rayson.

The bakery closed in 1953. During the war, there had been a subsidy on bread but when the subsidy was withdrawn in 1953 (meaning that the price of bread rose from four and a half old pence to seven and a half old pence), it was not possible to sell bread at a competitive price.

Freshly baked bread in Bottesford was then supplied by Mr. Freeman Brown. His bakery was in Foston and he made a daily delivery to his shop in Queen Street (now the Malthouse Deli).

Mr. and Mrs. T. Simpson stayed at The Old Bakery in Chapel Street until 1974 and then the building was sold, becoming a residential property.

At No.3 Chapel Street, next to the Old bakery,  Cecil Jallands and his son had a painting and decorating business. They operated within the village and used a hand-cart to transport their equipment.

These cottages were converted into flats and other cottages towards Queen Street include Dyer Cottage. For further details please click on the Dyers Cottage page.

Samuel and Catherine Rawdin (nee Bockin) lived in Rose Dyer’s cottage. In the 1901 census, Samuel’s occupation was a bricklayer. (One of the Rawdin children was Ada Elizabeth and she married George Singleton who ran a carriage business further down the street.) Behind these buildings were the cottages known as Wright’s Yard (later Redford’s Yard). They were approached through an archway entrance, known locally as ‘Marble Arch’.

The land as far as The Old Manse was the site of Singleton’s house and orchard. The Singletons both farmed and ran the carriage business. Older residents of the village recall that the Singleton cows were taken up to fields just over the Normanton level crossing and brought back for milking through the ford by the church. It was possible to buy milk by the jug from the kitchen at the Singletons. There were also rooms to be rented, particularly after the war when accommodation in Bottesford was in short supply.

The Singleton’s house was demolished in the early 1960s. W.J. Roberts then developed the site for housing.

There is record of a Mr Jackson working as a painter and decorator who lived on the corner of Chapel Street and Albert Street in a cottage (now demolished and replaced with modern housing). The lane through to Albert Street bordered pasture land owned by Billy Parnham. He farmed and his obituary in 1958 records that he was a ‘noted breeder of Lincoln Red Bulls’. Mrs Dorothy Beedham also recalls (Click here for further details) that her family would purchase fresh milk from Mr Parnham.

The Wesleyan Chapel, was built in 1845. It was used for worship until the end of World War 2. During the fifties, the chapel was used as an extra classroom for the school so that needlework and domestic science could be taught. It was later used for commercial storage of building material by Mr Bill Roberts until conversion into flats in 1988.

The building known as Rutland House (No.16) was originally two cottages. At some time the cottages were combined and during the eighties, Rutland House was a rural branch of the Halifax Building Society and then a solicitor’s office. It is now a residential property.

At the corner of Chapel Street and Queen Street is a former shop  – F.H. Winn. Details of this can be found by clicking on the page ‘Shops and Trades in Queen Street’.

The building on the opposite corner according to ‘The Little History of Bottesford’ is where William Billings Lane had his bakery in 1899. He also rented out two front rooms to the Grantham Cooperative Society that used them as a shop. Shortly after the Co-op gave up this shop. Mr. Lane moved to the corner of Devon Lane and J. D. Robinson took over the premises for a short time. After J. D. Robinson moved to Market Street around 1900 the shop then had a number of occupants.

Older residents recall that Arthur Germany, a baker and grocer used the ovens left by Mr. Lane and also sold knitting wool. Other trades-people in this shop included Mrs. Welbo(u)rne (shopkeeper), Kath Randle, Rosie Dyer (general store), Joy Taylor (antiques) and Mrs. Durrant (flowers, plants, fruit and greengrocery) in the 1980s. This large house was then modernised and converted into two dwellings. The original bake ovens are intact but are covered with plaster-board and there is still stabling for a pony at the rear of the house.

Towards Market Street on the South side of Chapel Street the next building was originally three cottages. One cottage still remains but the other two were converted into single accommodation.

Mr. and Mrs. A.V. Topps lived in the house until they moved to Church Street in the sixties. Mr. and Mrs. Watchorn then moved in and converted the house into a shop with two windows – one flat window and one bay shop window. On the right hand side as you walked in, were displays of everything to do with handicrafts and in particular wools for knitting. Mrs. Watchorn was an expert knitter and knitted for people in the village. On the other side of the shop were sweets and groceries.

Further historical Information about shops and trades in Chapel Street has been taken from business directories and census material. It is difficult to pinpoint exact locations along the street during the nineteenth century as a shop or trade was not necessarily at the Chapel Street address – the address given could be the home address.

The 1851 census lists 17 households on Chapel Street and 8 in Wright’s Yard.

There were a number of people connected with building and brick making – John Millus, John Price, William Lee and William Tyler.  Joseph, Hugh and William Challands had their homes on Chapel Street but their business (builders, joiners and brick and tile makers) was based on The Green in 1899.

William Page was a master baker. It is possible that he had his bakery at the corner of Chapel Street and Queen Street where William Billings Lane had his business in 1899.

There were also labourers for agriculture and building work.

The curate, the Rev. Henry Martin Baker lived on Chapel Street as did Edward Haynes, the Parish Clerk.

John Grafton Walker was a revenue officer. S. l. Widdowson was a baker; Robert Taylor was still making boots and shoes; Samuel King was a grocer and William Brewster was a tailor.

In that directory James Calderhead was an inland revenue officer, living on Chapel Street and the Rev. Caleb Eacott was curate. Samuel King still had his grocery, Robert Taylor was still making boots and Joseph Lenton was a butcher and cattle dealer.

In 1880 Wright’s Directory the Rev. Henry Howlett was curate and Marshall Lane was producing bread. Robert Parkes was a boot and shoe-maker and Samuel King had added being a draper to his directory entry.

The Rev. Henry Howlett lived with his family at The Manse on Chapel Street and Samuel King the grocer is also a Primitive local preacher. Timothy Archer was the Primitive Methodist Minister and Miss Sarah Walker had a boarding school with 10 scholars as boarders and Miss Helen Stark as governess. The school had been previously in Market Street at Craven House. The only building large enough to house a school was the building known as Singleton’s farmhouse.

Maria Ayre was a laundress and Mrs King was a dressmaker.

Wright’s Directory of 1899 placed William Billings Lane as a baker in Chapel Street and Samuel King was entered as grocer and draper.

John Thomas Cooper was a tailor.

Joseph Singleton is entered as a farmer and as a trap proprietor on Chapel Street, living in the large house known as Singleton’s House, (demolished circa 1955). In later directory entries the Singletons were cab and fly proprietors as the business passed to Alfred and George Singleton. The broughams, wagonettes and flys for the carrier’s business were parked on the land to the rear of the property. As Bottesford railway station was billed as ‘Bottesford for Belvoir’, a cab and landau service was available for transportation to the Peacock Hotel at Belvoir. By 1936, Alfred Singleton’s entry was as a farmer. Perhaps the advent of more motor vehicles on the road had made horse traffic unprofitable.

The Primitive Methodist Minister, Robert Middleton, from Bradwell, Derbyshire lived with his family on Chapel Street.