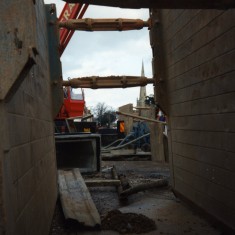 Hydraulic shutters used to secure the trench during construction 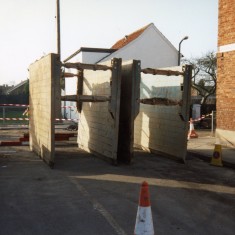 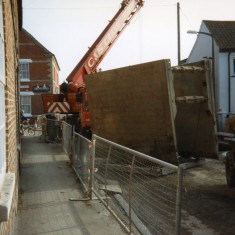 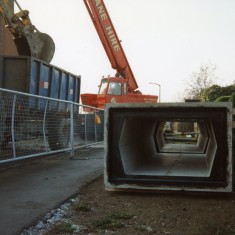 The precast sections of the new Rundle 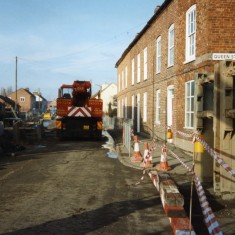 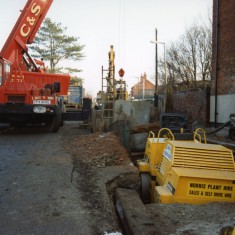 Pumping water from the trench

The opening of the Bottesford by-pass in 1989 made it possible to plan the rebuilding of The Rundle – a Victorian drainage system carrying the Rundel Beck east  to west through the village. Built before the roads carried heavy good vehicles its structure had been weakened by the pre-by-pass tonnage carried by A52.

High Street was closed a section at a time for the period of the rebuilding in the winter of 1991/92.

The engineering required the use of large hydraulic shutters to avoid the collapse of the trench. This was dug in short sections (two shutters in length) and filled in as the work progressed. Previous major engineering works in the 1960’s to replace the main sewers is reported to have run into major problems given the underlying geology of running sand. Fortunately the rebuilding of culvert was carried out without any problems.

The Victorian culvert was a D-shaped in section with brick arch of about three feet in diameter. It was quite an impressive structure. (If anyone has pictures please do get in touch – I was unable to record it before it was destroyed). It was replaced by pre-cast square sectioned pipes.

The sump at the Barkestone Lane  – High Street junction necessitated the digging of a very large hole. (Again if anyone has pictures please do get in touch).

Before the opening opening of the flood-gate one of the contractors is said to have used a skate board down to pass along The Rundle to test the gradient and check the joints.

The whole system takes dyke water from Granary Lane under the High Street to the West End where it joins the open dyke on Long Hedge Lane.

Unfortunately despite enlarging the Rundle culvert’s capacity the High Street was flooded in July 2001.