A Letter from Margaret Montegriffo 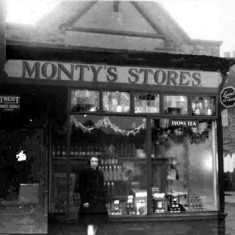 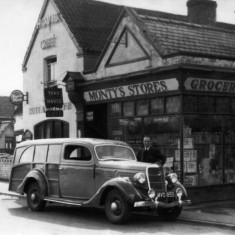 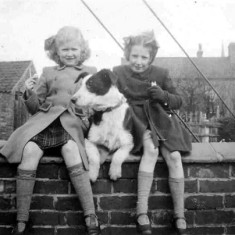 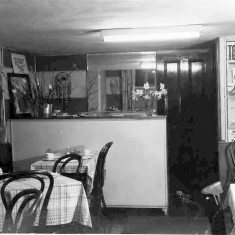 The interior of The Rutland Cafe 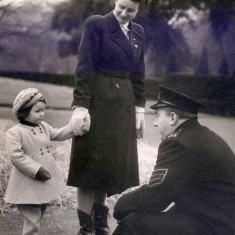 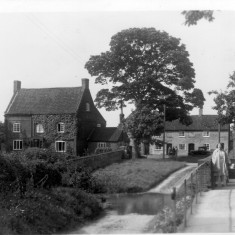 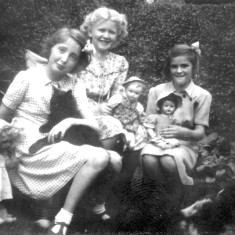 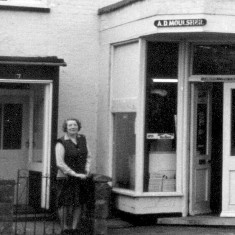 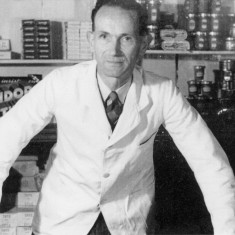 Mr. Otley in his shop. 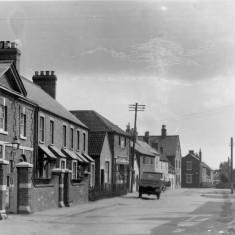 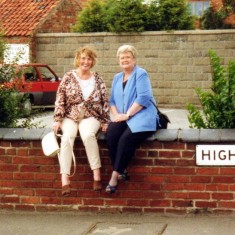 Margaret Montegriffo and Angela Bradshaw on the wall of the Rutland Arms a few years ago. 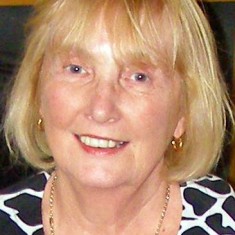 Margaret Montegriffo on her visit to Bottesford, August 2007

I Couldn’t Wait to Get back to the Village

I was known as Margaret Monty and my best friend was Angela Bradshaw. My father ran Monty’s Stores and the Rutland Cafe. I was in the village from 1947, aged 7, to 1956.

I was really enthralled by country living. I still went to school in Nottingham but couldn’t wait to get back to the village at the weekend and school holidays. Of course, Angela’s father was the village PC and he kept a watchful eye over us and Angela’s brother Mick and we were never allowed to go out of the county on our bicycles.

We biked for miles and miles, leaving our homes in the morning with a bottle of pop from the shop and sandwiches made by Mrs. Bradshaw. We would have a wonderful time in the fields, climbing trees and playing in haystacks. But water was always the most fun. We always had wet feet! We had to see who could jump the widest bit of the stream that went along Marsh’s field, at the start of Belvoir Road.

We had a sheep dog called Rex and he used to follow us everywhere but would sometimes be a nuisance if he saw a rabbit and wandered off, especially over Palmer’s Hill’s which was covered in rabbits. Rabbit Stew was a very substantial meal in those days. We also had an Uncle and Aunty live with us for a few years. Uncle was a retired Carpenter and Builder who would wander round in his working overalls and was friendly with the firm of Roberts. Everyone in the village called him ‘Uncle’.

Another favourite playing place was the Wooden Bridge where we would do acrobatics along the railings. I particularly remember Wendy Topps from the Coffee House, doing handstands all along the railings – I wonder what she does now?

I remember Tet, who I think was a POW from Europe somewhere. She lived and helped at the Vicarage but would always stop and have a word as she shuffled along, always wearing a hat and carrying a basket. Then there was the old man from round the Green who went everywhere on a three-wheeled bike. We used to go and stand on the Bridge over the Ford round the Green where the men used to drive into the water and wash their vehicles – no hosepipes in those days. We would then walk round to the Bakehouse – if we had any money on us and buy a penny Cob. The smell of the bread was as good as the actual bread!

We would often hear the sound of the Hunt and try and follow the horses and dogs but of course they went in places we could not get the bikes through. That was always disappointing – we liked the dogs but were never too interested in the horses.

Every Sweet Jat Was Empty

My family was Catholic and we had to go to Church in Grantham at 8 o’clock on Sunday mornings. I remember when Sweet Rationing finished, and as we rounded the corner to come back home, there was the longest queue I had ever seen! Within a very short space of time, every sweet jar was empty and the shelves bereft of bars of chocolate. Later on came the lifting of rationing on all other goods, and so went the huge tubs of sugar which had to be weighed and put into blue bags, and the huge lumps of butter and cheese which had to be carefully cut and weighed. There was always talk of which of the three main shops, Otleys, Moulshers and ours, had the most of the goods in stock and my Dad managed to get Bacon, which was a real treat.

My Dad was Gibraltese and spoke Spanish, French and Italian as fluently as English, so any foreigners were directed to him. I remember the family of Lees at the top of Belvoir Road had an au Pair and she would often come and talk to my Dad.

Being Catholics, it was very necessary to go to Church every Sunday, and we had a Priest visit us who wanted to get the old Church, somewhere near Redmile, about 10 miles away, into action on Sundays so then my family went round the little villages and piled the Catholics into our little van for Church. There would be 12 – 15 of us, freezing cold, waiting for Communion.

The Winter of 1953 or 1954 was especially cold and we rode our bikes up to the canal at the top of Belvoir Road to see if the canal was frozen – and it was very frozen. There were people having a wonderful time in ice-skates or wellies going along the canal, so after we decided it would hold our weight as well, Angela took her bike on the canal and road to Redmile and back. That was a really good weekend.

We Talked About the Time We Had

I really enjoyed every minute of living in the village and have lots of happy memories. About 5 years ago, Angela managed to get in touch with June Mumby and Brenda George and we all had a meal in the Red Lion in the village. We talked about the time we had somebody’s washing line all across Queen Street and would skip there in the evenings until darkness almost fell.

Angela and I did lose touch for about 15 years, due to us both moving around, after I returned from Germany and went to live in the village of Old Dalby. I made a very good friend in Ann Jallands who went to the Melton Grammar School the same time as Angela. Ann was organising a School Reunion and and I had talked to her about Angela and she managed to obtain her current address. I duly wrote to Angela and we phoned and met each other in 1995 and have kept in touch weekly ever since. I also met up with Peter Towsey who I had known in Bottesford.

Ah well, life goes on with all its changes and progress. Whoever thought then that we would be flying across the world in Jets and having Mobile Phones and Television with 40″ screens. Never mind waiting for a bus anymore – we all have cars, and bikes are now for healthy reasons, which we never seem to have the time to use.

We were delighted to receive this letter from Margaret Montegriffo, together with these splendid photographs, some of which reached us via the Bradshaws in Australia.

We were even more delighted when Margaret, Angela and Wendy Cross met up in Bottesford and shared their memories of the old days in Bottesford. We look forward to many more such reunions.