Known as Butcher's Row or, in the 19th Century, Jackson's Row 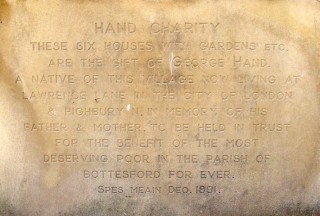 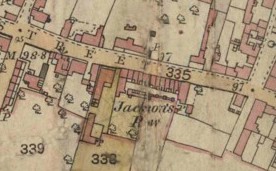 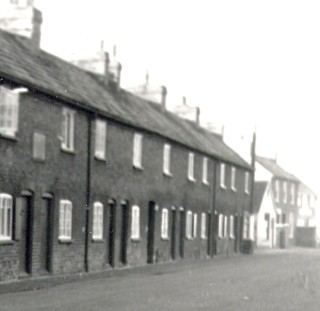 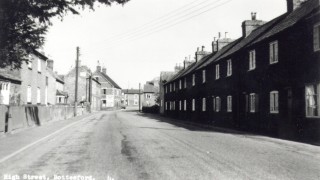 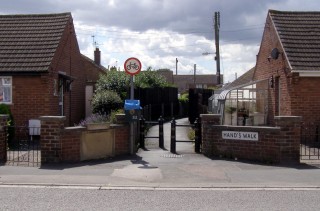 Hand's Walk, on the site of the old cottages.

This information about the row of cottages that once stood on the High Street, Bottesford, where Hand’s Walk is today, was put together by John Dockerel in conversation with Mike Saunders, based on Mike’s researches.

In the High Street where the bus stops for Bingham a path called Hand’s Walk leads between two pairs of bungalows. Until 1962 a row of six cottages, known locally at the time as Butcher’s Row, stood where the bungalows are. It is believed that this was the site of Bottesford’s Workhouse in the eighteenth century. There is a stone tablet beside the path in the middle of these cottages.

These six houses with gardens, and other appurtenances are the gift of George Hand a native of this village and now living in Lawrence Lane in the city of London, and Highbury N. in memory of his father and mother: to be held in trust for the benefit of the most deserving poor in the parish of Bottesford for ever.

George Hand had made his money as a woollen merchant in London. He bought six cottages from their previous owners and appointed seven trustees to let and manage the cottages. The cottages were not almshouses, but let to make a profit. From the profit the trustees were to pay the National School £5 a year until the school was totally maintained by public funding. Any additional profits were to be used for “purchasing food, fuel or clothing for the …deserving and needy poor of the parish”. At the end of 1891 the charity gave ten shillings each to ’30 deserving poor’. It seems possible that the ‘fuel’ that some of the recipients bought was alcoholic, because at the end of 1892 the trustees reported “not being satisfied to the disposal of the charity  …   the recipients not using it properly”. The trustees decided to issue tickets with a value of two shillings and sixpence which had to be spent with tradespeople in the village. The distribution of tickets and money continued into the 1930s, by which time the trustees were giving coal to some of those receiving charity. Minutes of the trustees show that they were concerned to have good quality coal and even specified Tibshelf Bright at 35 shillings a hundredweight.

[Note that the map and photographs clearly show that there were more than six front doors to houses, suggesting that Hand’s original six cottages had each been divided into two. Ed]

From time to time the trustees had problems with some of the tenants of the cottages, and on occasions had to serve notice. There were cases of rent arrears; a complaint about “filthy and obscene language”; a neighbour objecting to the dumping of refuse where he wanted to dig a dyke; illegal lodgers and the dumping of ashes too close to the houses.

Although the cottages were not almshouses they were let at a very low rent. In 1892 the rent was £5 a year. In 1932 it was £7 and by 1955 it was £13, a weekly rental of five shillings. With rentals so low the income was often insufficient to carry out the maintenance and repairs necessary. Although the charity dated from 1891 the cottages had not been new when purchased.

By the mid-1920s tenants were requesting repairs to roofs, chimney pots, spouting, floors, ceilings, coppers, grates and water pumps. Often requests were deferred or agreed to only if the tenant would contribute. Among the items deferred was the provision of separate toilets for each house. These and the water pumps were shared. When it was agreed to paint the cottages in 1932, it was on condition that the cost did not exceed £10. In 1934 the trustees agreed to allow the tenants to have gas or electric lights fitted at their own expense provided that no damage was done to the properties. In 1950 the trustees deferred the provision of a water supply because of the heavy cost and because the tenants did not want it. In the years following the 1939-1945 war the builder was unable to carry out many of the necessary repairs due to the scarcity of materials. From the mid-20s until the 1950s maintenance costs often used all the income and in ten years during this period no charity distributions were made. It was against this background that the shock came.

On 13th September 1957, a Compulsory Purchase Order on the cottages appeared in the Grantham Journal. The trustees were not given any report on the cottages until 31st December 1957, although officials from the Melton and Belvoir Rural District Council had inspected the cottages on several occasions in the previous year. The grounds for declaring the houses “unfit for human habitation” were:

the condition of bedroom floors and ceilings;

inadequate provision for the storage, preparation and cooking of food;

state of the kitchen ranges;

The trustees sent letters of objection to the Rural District Council, the local M.P., the Minister of Housing and Local Government and the Charity Commission. The trustees case was that:

l. The houses were in a good state of repair and let at a rental of 5 shillings a week to elderly folk who could not afford a higher rent.

2. The property was endowed in perpetuity and the proposal would infringe the original trust deed.

3. The Rural District Council planned a new road on the site of the cottages from the new estate to the main Grantham – Nottingham road (Note: this was before Bottesford had a by-pass). The trustees expressed safety concerns because there were children on the estate and the road was used by heavy lorries every day and by large numbers of cars and coaches going to the East Coast in the summer. In any case there were two existing roads, Belvoir Road and Barkestone Lane, within 250 yards of the proposed new road.

4. In respect of the water supply the trustees wrote that this applied to many other houses in the village and that a greater potential danger was the open sewer running from Easthorpe into the village past the village institute and the playing fields of the school.

There were appeals that went eventually to the House of Lords. The Charity Commission pointed out that the purpose of the original investment in the cottages was to produce income and that the cottages were not in any sense almshouses and if retaining the cottages was uneconomic it was the trustees’ duty to effect a sale. The sale was completed in 1962 for the sum of £660. In the same year the present four bungalows were built. The Hand’s Charity still exists. In 1971 the income from a number of local charities was amalgamated and is now administered by the Parish Council.