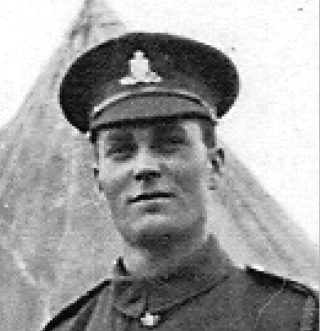 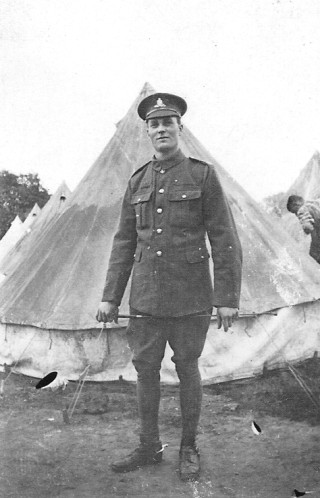 My great uncle William Henry Coy in the uniform of the Royal Field Artillery. Killed at Boezinge in Belgium, August 1917 and commemorated on the war memorial at Muston Church.
From the collection of Iain Coy 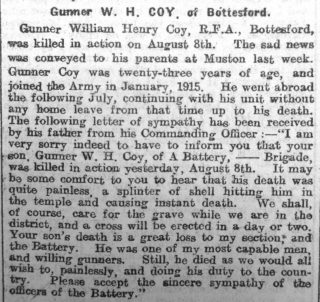 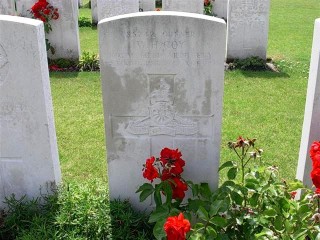 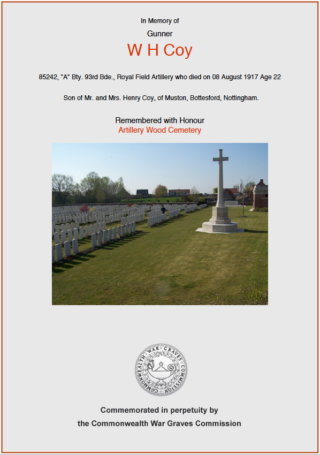 William Henry Coy was born in October 1894 in the hamlet of Stenwith near Muston.

William  was the son of Mr. and Mrs Henry Coy who lived at Breeder Hills, Stenwith. Henry Coy was born in Woolsthorpe in 1861 and his wife Sarah (née Smith) was born in Coston, Leicestershire. The couple were married in 1884.

In 1901 the Coy family in one of three cottages at Breeder Hills. Henry Coy worked as an agricultural labourer and the family members living at home were Mary Ann (12), Harriett (10), Susan (8), William (6), Lizzie (4) and Cyril (1).   By 1911 Henry and Sarah Coy were living at Mary’s Row in Muston with Lizzie, Cyril. Albert and Cecil. Henry Coy was by then working as an ironstone labourer. William was now living at the Bull Hotel in Bottesford working as a cowman for George Goodson who was both a publican and farmer.

William Coy enlisted in the Army in January 1915 and was posted to France France on 22 July 1915 as a gunner (Service Number 85242) with Royal Field Artillery “A” Battery 93rd Brigade. He had continuous service with his unit with no home leave until he was killed in action on the 8th August 1917 aged 22. William experienced two years of continuous action.  For most of August 1915 his Brigade was honing its skills at Bleu near Armentieres as part of the 20th (Light) Division.  At the end of August the 93rd Brigade was attached to the 8th Division Division and commenced their front line engagement in the action at Bois de Grenier. This was part of a diversionary attack designed to draw attention away from the Loos offensive. They fired over 2500 shells in their first month of active service. They remained in action near Armentieres from October to December before transfer to the Ypres Salient. They were stationed there for nine months in 1916 before further transfer into the final stage of the Battle of the Somme at Guillemont. They then remained on the Somme for three months until December 1916  before redeployment back to action in the 3rd Battle of Ypres sometime before end of July 1917 at Picklem. On the 8th January 1917 the 93rd Brigade left 20th (Light) Division and was redesignated as an Army Brigade. No detailed War Diary records survive from January 1917 onwards. The War Diaries from August 1915 to December 1916 describe the unremitting work of a field artillery unit. William Coy established a reputation of capability and enterprise. After his death his Commanding Officer wrote to his parents:

‘(I)t may be of some comfort to you to hear that his death was quite painless, a splinter of a shell hitting him in the temple causing instant death. We shall of course, care for the grave while we are in district, and a cross will be erected in a day or two. Your son’s death is a great loss to my section and Battery. He was one of my most capable men and willing gunners.’

William was killed in aftermath of the Battle of Picklem Ridge. His family were not informed initially of the whereabouts of William’s grave. It is at the Artillery Wood Cemetery, France close to where he was killed in action.

We are most grateful to Iain Coy for sharing his research and family photographs. Main Sources 93rd Brigade War Diary - The National Archives' reference WO-95-2106-1 The Battles of French Flanders. By Jon Cookset, Jerry Murland (2015) https://www.longlongtrail.co.uk/army/order-of-battle-of-divisions/20th-light-division https://www.longlongtrail.co.uk/army/order-of-battle-of-divisions/8th-division/ The history Of The Twentieth (Light) Division” by Captain V. E. Inglefield (1921/2009)
Served in
Royal Field Artillery (19)