John and Nellie Bullock and their son Frankie 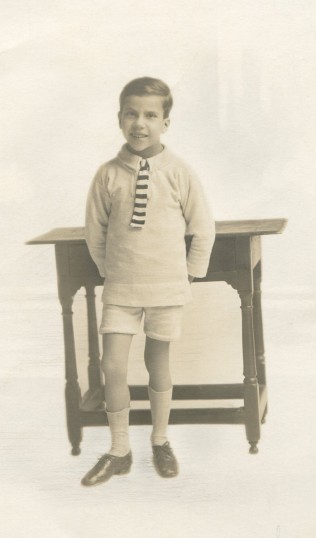 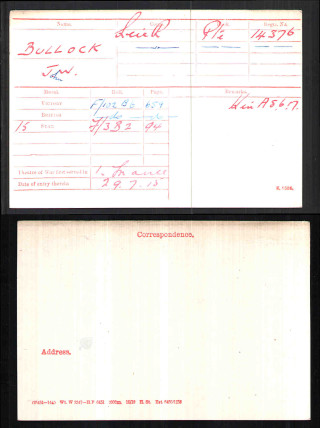 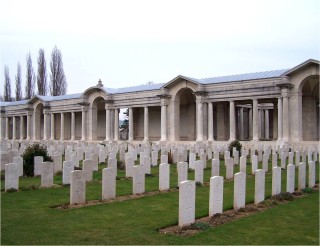 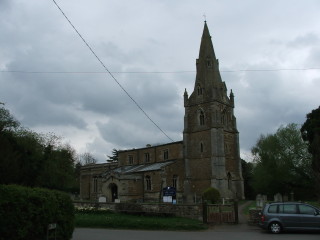 Muston church with the war memorial near to the gate 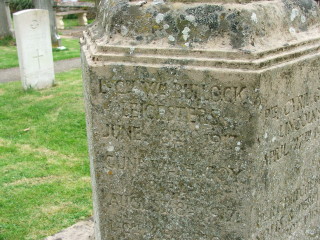 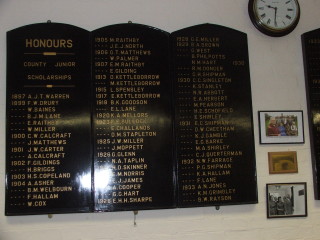 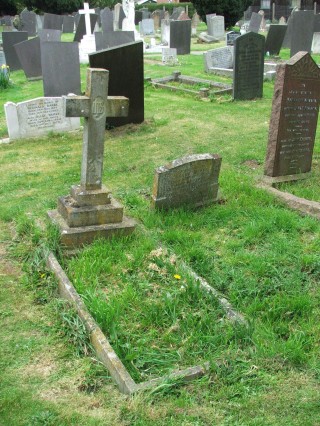 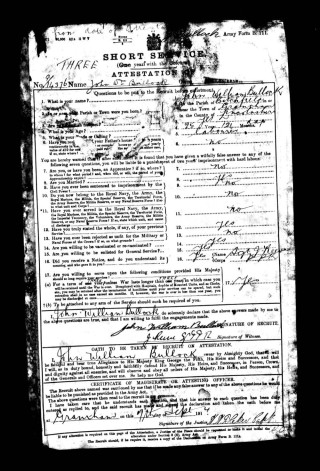 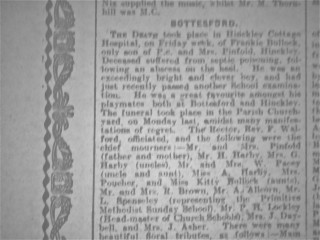 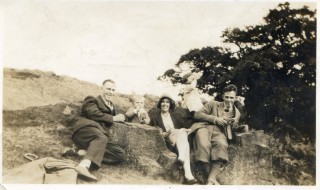 Ernie & Nellie Pinfold with their children and George Harby in a 1930s visit to Charnwood. 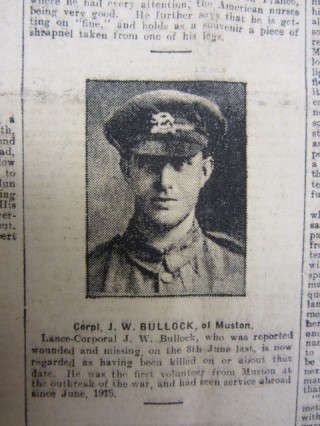 The next of the Pickworth Harbys to move to Bottesford was Harry’s sister Ellen, known as Nellie, who lived in Queen Street in 1911 as a general domestic servant for the bootmaker William Hartley and his wife Eliza . Nellie was 19 years old and lived in the Hartleys’ house. She met a young stone quarry worker named John William Bullock who lived in Muston and fell in love and then fell pregnant, leading to their marriage on the 5th October 1912 and their settling in Muston. In December 1912 their son Francis was born, supposedly named as a way for Nellie to honour her favourite aunt from Pickworth, Nell France. He became known as Frankie.

When the First World War started William Bullock was caught up in the mood and signed on for three years with the 1st 4th Battalion of the Leicestershire Regiment, becoming Lance Corporal 14376. He left his young wife and son in 1914 and fought in France.

The regimental history by T. E. Sandall records the action as follows:

At 5.30 p.m. on June 8th, the Battalion marched from Red Mill to cellars in the vicinity of the church and Souchez River. At 8.30 p.m. the 138th Brigade raided the enemy defences on Hill 65, and round Fosse 3, the assaulting Battalions being the 1/4th Lincolnshire and the 1/5th Leicestershire Regiments with the 1/4th Leicestershire as “Moppers Up” and the 1/5th Lincolnshire in reserve. The active operations that the Battalion took part in were as follows:

C Company, detailed for wiring in front of the captured enemy trenches, was ordered to proceed at 10.30 p.m., but the start was postponed by a Brigade Order, and the Company eventually reached its destination about midnight. Lieut. J. E. Emerson in command showed great coolness and courage in organizing the work under heavy fire, and also assisted in the consolidation of the captured trench, when no other officer was available. Company-Sergt.-Major H. Pickard also exhibited conspicuous coolness and courage in issuing the stores and organizing the parties at the dump under heavy shell fire, which he completely disregarded; he was later of great assistance to his Company Commander in superintending the work and encouraging the men and set a fine example. The company put out screw pickets and four strands of wire and supports on a front of 300 yards in front of Brick trench—the work was completed at 1.45 a.m., and the company returned to billets.

A more detailed description of the action in which JW Bullock died is in “Footprints of the 1/4th Leicestershire Regiment” by John Milne who was a captain in the regiment. Originally published in 1935 by Edgar Backus in Leicester it covers August 1914 to November 1918. On page 103 in Chapter XXX “Lens in June” it describes the 1917 rehearsals for a major attack that they practised at Marqueffles Farm in order to stop the Germans from hiding in trenches that the British think they have taken over but then emerging to shoot the Tommies from behind. This was to be countered by assigning men to flush out the hiding Germans – or “mopping up”.

“Assuredly the enemy would stand little chance against such a carefully prepared onslaught. Everything was ready. Everybody knew their part. Every possible situation had been thought out and prepared for. The attack would be a colossal success.

Next day, however, someone in authority thought it would be nicer to have a raid than an attack so all the orders were cancelled, and all the sweat and blasphemy at Marqueffles Farm had been in vain. Atkins was not surprised; he had been messed about before and anyway he did not like “stunts”.

June 6th found the battalion in the line again in cellars in Lievin. Next day was spent in making final preparations for the raid. At 5 a.m. on the 8th our artillery began to bombard and continued until Zero hour (8.30 p.m.). At 5 p.m. the companies began to assemble in the assembly trenches. The 5th Leicestershires and 4th Lincolns were to go over first and the 4th Leicesters were to mop up. Everything was ready at 7.45 p.m. The assembly trenches were full. Then suddenly at 8 p.m. the enemy began to bombard. They had evidently got wind of the raid, some said from one of their aeroplanes. Fortunately, they rather overshot the mark, and little damage was done by their shells.

The assault began at 8.30 p.m. under cover of heavy artillery and a shrapnel barrage put down by the field artillery. On the right good progress was made and the objectives in Almanac Trench were reached. “B” Company under Captain J. G. Abell and “C” Company under Lieutenant Hyslop began “mopping up”. They found a large number of the enemy in Fosse 3 where there were eleven buildings with many dug-outs. These were dealt with with bombs and mobile charges. Heavy casualties were inflicted upon the enemy and two officers and twelve other ranks taken prisoners. “C” Company had a lot of trouble with uncut wire and a machine-gun. One machine-gun cunningly placed and stoutly manned can knock hell out of advancing infantry, and often did.

On the left “D” Company met with serious opposition in Ahead Trench. They were mopping up for the 4th Lincolnshire Regiment and they suffered many casualties including their commander, Captain Wakerley, who was killed. Here again enemy trenches were entered, dug-outs bombed, and heavy casualties inflicted. The Hun had a very disturbed night.

The withdrawal began at 1 a.m. and the companies were back in their cellars at Lievin at 3 a.m. licking their wounds and lapping up their rum. Second-lieutenants R. F. Wagstaff, E. C. Doudney, J. Douglas, D. T. Sloper and H. J. A. Parkinson were wounded. There were seventy other ranks killed and wounded.”

Lance Corporal J. W. Bullock must have been amongst those 70 other ranks.

In the military records, Nellie, as next of kin, is recorded as still living in ‘Muston, Bottesford’. In the dispassionate terms of those records, the ’22-3-1918′ is listed as the date of ‘acceptance of death for official purposes’. William’s personal effects were returned to Nellie on the 28th May 1918 to ‘Mrs Nellie Bullock, Barkestone Lane, Bottesford’. His campaign medals were forwarded on the 8th November 1920 and their receipt acknowledged by Nellie on the 11th December 1920.

John William Bullock is honoured on the Arras memorial

He is also remembered on the Muston war memorial.

Nellie would have been devastated, compounded by the news of her brothers also caught up in the fighting. Around this time her parents, Henry and Mary, moved from Londonthorpe to Bottesford to be nearer to their grieving daughter, bringing along her eldest sister Annie and her younger siblings Edith and George.

Nellie turned to caring for her son and as he grew she walked him across the fields to visit the school in Redmile, learning about nature and wildlife along the way. She was an intelligent woman and is fondly remembered in her later life enjoying country walks and knowing a great deal about hedgerow plants and country lore.

Nellie found love again after the war when a young police constable was assigned to Bottesford. William Ernest “Ernie” Pinfold was originally from Kibworth Beauchamp on the far side of Leicester. He courted and won the hand in marriage of the young widow Nellie, but as soon as they were wed he was posted back across the county to Hinckley. For a while the couple lived a split life, with Nellie sometimes in Bottesford so that son Frankie could continue at Bottesford school. At other times Frankie lived with his grandparents Henry and Mary so that his mother could spend time with her new husband in Hinckley.

Frankie was a successful pupil at Bottesford and must have been a bright boy as can be seen on the county scholarship honours boards in the old schoolroom where he is listed first for 1923.

But tragedy was to strike again. Frankie got a bacterial infection in 1924 and died at the age of 11. He passed away in Hinckley cottage hospital and is buried in Bottesford alongside his uncle Harry who died in 1950.

The wider family rallied round to support Nellie after this terrible loss, including a touching letter from her brother Teddy in Canada offering warm words of condolence. It took time to come to terms with Frankie’s death, but after three years Nellie and Ernie were able to start a family again. They had a daughter in 1927 and a son in 1929. Both were given the name Francis as their third forename, in memory of their brother. In turn they each continued the practice of including the name Francis with many of their own children.

Nellie and Ernie Pinfold stayed in touch with Bottesford, returning to see the Harby families living in the village often through the thirties and forties.