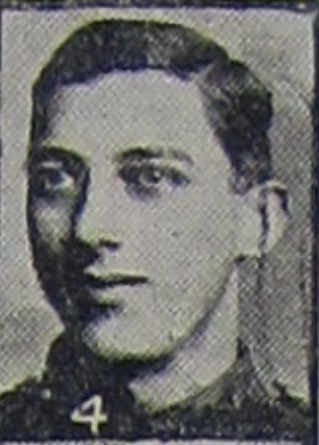 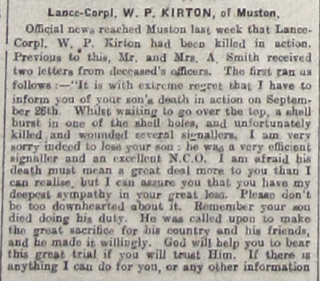 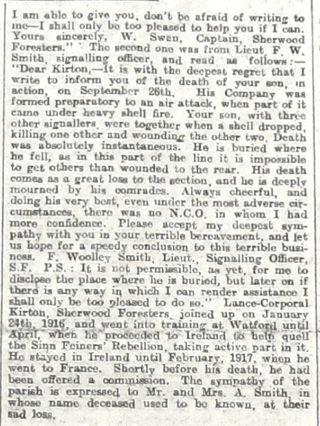 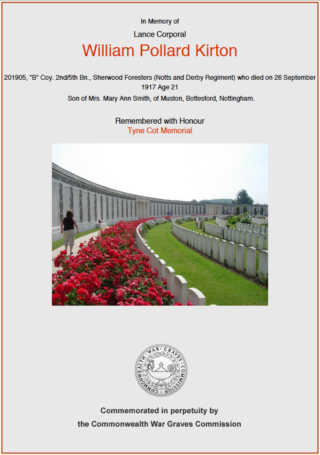 William Pollard Kirton was born in 1897 in Edwalton, Nottingham.

William was the son of Mary Ann Kirton. Mary married Arthur Smith in 1897. By 1901 the couple were living on Woolsthorpe Road Muston with William Smith aged 4 (known as William Pollard Kirton). Arthur Smith worked as a shepherd. In 1911 the Smiths were still living in Muston. Arthur was now working as a railway platelayer. Aged 14, William was a messenger in the commercial department for a railway company – most likely the Great Northern Railway which ran through Bottesford.

By the time of his enlistment aged 19 years, on the 25th November 1915, William Kirton was a warehousemen for a clothing company. He lived in Ella Road, West Bridgford, Nottingham. William joined the 2/5th Battalion, Sherwood Foresters. At 5’ 10 ¾” he was tall in comparison to the average recruit height of 5’4”. In November 1915 his Battalion became part of the 176th Brigade, 59th (2nd North Midland) Division located in Watford.

William’s service record shows that he had “service in the Field at Home in Ireland”. In April 1916 the 2/5th Battalion as part of the 2nd North Midland was ordered to Ireland to assist in ‘quelling’ the Easter Uprising in Dublin and elsewhere. Severe fighting took place with the Irish Nationalist forces. Heavy casualties were incurred in the Sherwood Forester Battalions. As things quietened down the units moved from Dublin to the Curragh. It would not have been an easy posting. Nor would it have equipped them war fare in the trenches on the Western Front. The passing of the Military Service Act in early 1916 deemed that all men had agreed to serve overseas. William returned to England with the 2/5th Battalion in January 1917 at Fovant in Wiltshire. Unfortunately there was little time for any extended period of training. Orders were received that the whole Division should proceed to France. William was posted to France on the 21st February 1917  as a Signaller. The 2/5h Battalion, Sherwood Foresters with  59th (2nd Midland) Division was immediately sent into the front line south of the Somme, near Estrees. William then experienced  seven months of active service in France and Flanders, most of which involved extensive periods of front line action. He would have taken part in the following Division engagements:

With the strategic withdrawal of German Forces east from the Somme, the 59th Division was tasked with pursuing them. The lack of training began to be felt in the difficult situation of advance and counter attack especially at Le Verguier where they lost over 100 men in April. Further attacks and counter attacks in May  resulted in a further 150 men who were either killed, wounded or missing.
In May 1917 the Division was relieved of front line duty. However after a matter of days they moved back into the Cambrai front line at Havrincourt and Flesquieres. Finally, in June 1917 they were relieved and moved for rest and reinforcement at Barastre in preparation for offensive of the 3rd Battle of Ypres in  Flanders. They moved in late August by train from Acheux to Winnezeele, arriving early September. William Kirton was involved in the following actions with his Unit:

The Battle of the Menin Road Ridge (23-25 September)

On the 20th September 1917, the Division’s role was to relieve the 55th (West Lancashire) Division after it had made an attack in the area of Gravenstafel.  Assembling around Goldfish Chateau, just outside Ypres, the Division moved into the salient on the night of 23/24th September and took their battle positions during 25th and 26th.

The Battle of Polygon Wood (26-30 September)

The Division attacked as part of the British force that made an assault early on 26 September.

The 2/5th Battalion War Diary for the 26th September reports

ZERO DAY
2.10 am Companies reported to be in position for attack.
3.50 am Commencement of Bombardment 2 hrs duration previous to ZERO HOUR (Enemy Barrage retaliation on his Barrage Lines)
5.50 am ZERO Hour
The post engagement report describe what happened in more detail.
ASSEMBLY LINES
(…) At 4.00 a.m. In reply to our preliminary bombardment, the enemy put down a heavy barrage and ‘D’ and ‘A’ Company suffered considerable casualties.

William Kirton was with ‘B’ Company who were immediately behind ‘D’ Company. The  Battalion was using shell holes as their front line defense. During the bombardment on German positions William was “waiting to go over the top, a shell burst in one of the shell holes” where he and three other signallers were waiting. He and another signaller were killed instantly and two others were injured.

Over the next three days the Division suffered 2000 casualties before being relieved on the 29th September 1917.

William Kirton stood out as someone with leadership potential. He was promoted to Lance-Corporal on the 19th May 1917 during a period re-organisation within the Battalion after the front line action at Le Verguier. He clearly merited that promotion. On his death Captain W. Swan, from his Battalion commended William  as “a very efficient signaller and an excellent N.C.O.” His Signalling Officer, Lieutenant F. Woolley also noted that William was “A)lways cheerful, and doing his very best under, even under the most adverse circumstances, there was no N.C.O. in whom I had more confidence.”

Four months after his promotion within the ranks he was offered a commission as an officer. Sadly he was killed before he had the opportunity to take on that role.

Lieutenant Woolley Smith wrote to his parents to let them know that William “was buried where he fell, as in this part of the line it is impossible to get other than the wounded to the rear.”  William’s grave was lost during the subsequent conflict. He is ‘remembered with honour’ on the Tyne Cot Memorial.

The 2/5th Battalion Sherwood Foresters lost over 600 men on the 21st March 1918. They were either killed, wounded, captured or missing on the first day of the German Spring Offensive. Four men from William Kirton’s Battalion “survived” to answer the roll call.