You are here: Home>About Us>Read it here - Not Forgetting>Not Forgetting - Aspects of Village Life in Bottesford, Easthorpe, Muston and Normanton

Not Forgetting - Aspects of Village Life in Bottesford, Easthorpe, Muston and Normanton 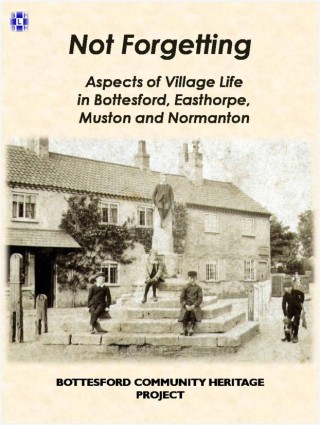 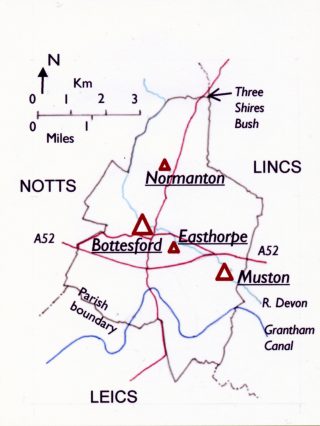 The outline of the Parish of Bottesford and Muston.
Bottesford Local History Archive 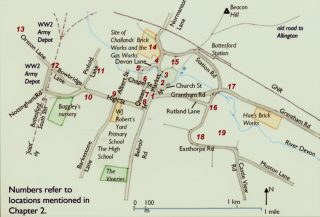 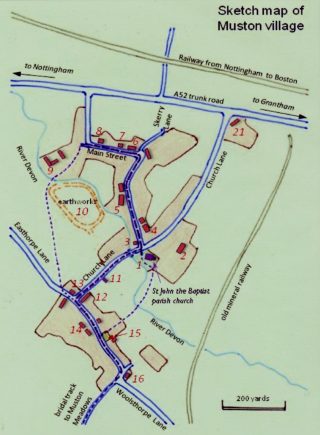 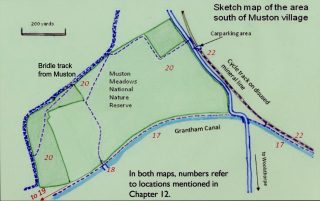 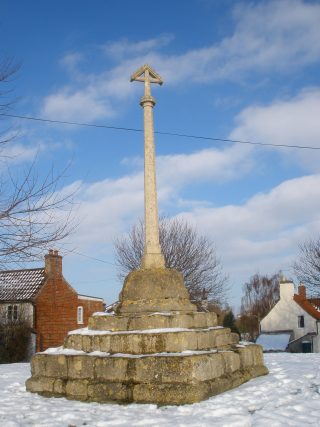 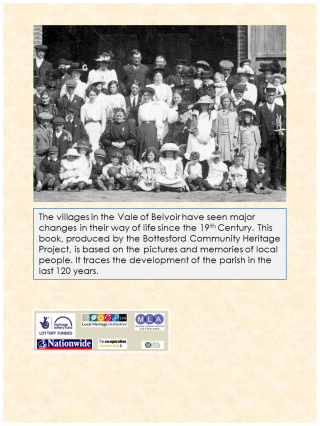 The rear cover of the book, including a image of villagers gathered by a barn in Normanton during the celebrations of the Coronation of King George V in 1911.
Bottesford Local History Archive; the picture was contributed by Mrs Dorothy Beedham

It is, in 2019, ten years since this book was published with a print run of 1000 copies, all of which have been sold (save for a few reference copies). You can find it in the Reference section of Bottesford Community Library in the Old School, Grantham Road, Bottesford, or else you may be able to find a second-hand copy for sale. However, now is probably a good time to make the book available via this website. To do this, the plan is to place the entire book here chapter by chapter as a series of pages which can be opened using the links to be added to this page.


This has involved changing the formatting to the editorial scheme of this website, and as a consequence you will find that the pictures tend to become our of sync with the text. We hope this is not too large a problem,and it does allow us to display pictures using the magnifier which allows you to see detail of faces etc. that are not so clear in the original paper version. However, if it does make you tear your hair out we are also adding PDF files with the original format as supplied to our printers/publishers (Tucann Press). To read the PDF versions you will need PDF-reading software. If you don’t already have such a facility on your Windows PC we would recommend that you download Acrobat Reader, which is a free piece of software – just follow the link (Macs and Chrome probably come with a reader built-in, but I am not certain of this).

Chapter 1 – An Introduction to the Villages   Neil Fortey

Chapter 9 – Getting About in the Past    Alan Pizzey

This book looks at our villages through the past up to the present day. It has been produced by the Bottesford “Living History” Community Heritage Project, a group of enthusiastic volunteers based in the village of Bottesford, Leicestershire. Its objective is to look at the four villages that make up the parish of Bottesford and Muston as they have developed from Victorian times up to the present, a period during which Great Britain itself has changed enormously.

The book is the result of team work, and as such its authorship is shared among a number of writers. The contributing authors are, in alphabetic order, Daphne Cassidy, Herbert Daybell, Sue Dunsmore, Neil Fortey, David Middleton, Sue Middleton, Alan Pizzey, Margaret Poultney, Catherine Pugh, John Simpson and Peter Topps; it has been edited by Neil Fortey. Additional essential assistance in preparing the text was provided by Barbara Pizzey, Peggy Topps, Jill Bagnall and Ted Rayson.

We gratefully acknowledge permission to quote the words of Irene Pacey, Godfrey Sutton, Councillor David Wright, Lol Pickin, John and Joy Simpson, John Goodson and Peter Mackness. We also gratefully acknowledge the support, assistance and information, pictures, documents and family heirlooms provided by the above and by many other residents of Bottesford, Easthorpe, Muston and Normanton, and also by many others who have contacted us with help both within the UK and other countries worldwide. Without this the project would not exist and this book could not have been written.

The project was made possible by a grant from the Heritage Lottery Fund (LH-06-086) and the Nationwide Building Society. Additional financial support for its website [bottesfordhistory.org.uk] was provided by Museums, Libraries and Archives East Midlands. The website is hosted and supported by Community Sites Ltd.

Since its inception in 2006, the Bottesford Community Heritage Project has built up an archive of local history relating to the past 160 years or so of local history. Photographs and documents have been scanned. Memories have been recorded. The project has held exhibitions in the village meeting room (The Fuller Room), developed its website, published a series of heritage trail leaflets and mounted a living history drama. It has also maintained a public noticeboard as a running exhibition with a new display each fortnight, made possible by the support of the Cooperative Society.

The present book is a culmination of all these activities. We have endeavoured to be accurate and comprehensive, but in all good faith there will be inaccuracies and omissions. For these we apologise, and ask that we be informed of them so that they can be corrected in a later edition.

Our intention has been to look at various aspects of village life. At the outset the concept was that of living memory, but perhaps inevitably the scope has been extended back into the 19th Century. The historic and topographic landscape around the villages is described in the opening chapter, and then village buildings and landmarks are examined in a chapter which tours Bottesford, Easthorpe and Normanton; Muston is described in a separate chapter, later in the book. An extended chapter describes in detail the shops and trades in Bottesford from the mid-19th Century to recent years. Bottesford’s parish church and its Methodist and Baptist chapels are described. The history of Bottesford village school from 1863 to 1948 is examined, based on teacher’s log books and management committee minutes that have been preserved. A personal account of the post-WW2 development of farming in Bottesford is given, followed by chapters that address village industries and the development of local transport. Two chapters examine, respectively, the effects of the two World Wars on village life. Muston is described in a chapter which provides a historic tour of this village. Then the final part of the book consists of an account of modern Bottesford, followed by ‘Tailpieces’, a short selection of village stories and self-help projects.

All parts of the book are illustrated with photographs drawn from the project’s archive of scanned images.  Parts of 18th and 19th Century Ordnance Survey maps and other village maps are reproduced where appropriate, together with a map of Bottesford airfield.

Where we have reproduced photographs, we have done so with the permission of the owners of the prints that we have worked from. In many cases there is uncertainty as to the identity of the original photographer. We can only hope that this does not cause offence or upset, and welcome contact and further information regarding these matters. Proceeds from the sale of this book will be used firstly to meet its printing cost, then any excess will be used to support the future work of the project. None of the project members, or any other person, will receive any personal gain.

Bottesford and its neighbouring villages, in the north-east corner of Leicestershire, present a fascinating and attractive picture that reflects much of English life in the twenty-first century.  Today, the village is extremely fortunate in being the focus of one of the very best Community History Projects in the country.  The years of hard work by the members of Bottesford Community History Project have reached a successful culmination in this intensely fascinating account of nineteenth- and twentieth-century life in one of the most attractive groups of villages in the East Midlands.

The early history of Bottesford and district can be studied through its Domesday Book entry, through the centuries of manor court records still kept at Belvoir Castle, through the seventeenth-century pamphlet that documents the 1619 witchcraft case,  through John Nichols’ full description in his late eighteenth-century History of Leicestershire and in Irvin Eller’s excellent account in his early nineteenth-century History of Belvoir Castle.  What has been missing so far is a full, detailed account of how local people have lived their everyday lives in recent years in this significant community of villages.

Neil Fortey, the book’s editor and a moving spirit behind the Community History Project, has successfully filled this gap.  He has brought together a group of today’s village residents to describe and illustrate the recent past and the present of the village they live in and to preserve memories which would otherwise be forgotten and lost to us.  These thorough and well-researched accounts of local buildings, people and events present a full, fascinating account of a contemporary English village.  The commercial activity of the past 150 years is brought back to life.  The roles played in village life by the church, the chapels and the schools are examined in detail, as are the changes in farming. Its declining contribution to the local workforce makes an interesting comparison to the account of the other trades and professions which have provided a living for the inhabitants of these four villages.  The book documents both the successes and the failures, the happy and sad times of local life.  The combination of distress and intense dedication of the war years of the first half of the twentieth century is very movingly described.

The life of the people of the four villages today is the focus of the three chapters which take the reader on guided tours of their streets, lanes and buildings.  Both local residents and visitors can be led by these accounts to appreciate the value and attractiveness of their surviving heritage. Lost memories are revived and insights are offered into the reality of our contemporary community.  This book will gain the gratitude of present-day readers and of future generations for preserving a picture of village life, not only in the nineteenth and twentieth centuries but also as it is today.  Not Forgetting shows what has been lost, but also what has been gained in the passing of the years, through that blend of continuity and change that links today’s life in these villages with their heritage of history.

These books and sources cover a range of topics about Bottesford, Muston and the surrounding area of the Vale of Belvoir.

John Nichols, The Antiquities of Leicestershire. 1791. Vol.II Part I. Published by SR Publishers Limited in collaboration with Leicestershire County Council.

Edward A. Shipman, 1995. Gleanings about the Church of St. Mary the Virgin, Bottesford.  Published privately, 1995.

We have also looked through the Victorian censuses and at Directories from 1849 to 1941. The censuses can be studied using genealogical sources on the internet. Leicestershire Directories can be studied at local libraries (e.g. At Melton Mowbray), the Leicestershire Record Centre at Wigston Magna or via the internet at  http://www.historicaldirectories.org/hd/. A valuable internet source of information recorded from parish records in Guys of Bottesford, Leicestershire, at http://freespace.virgin.net/guy.etchells/ .

Other sources have included:

The Northeast Corner, the unpublished account of local history written by Laurie Dewey, Percy Stimpson and others around 1950.

The Cross & Stocks, a Bottesford village magazine published by E.A. Shipman in 1968 and 1969

Bottesford Library has a copy of G.V.Collett’s How to have a Holiday in the Vale of Belvoir and other relevant local books and pamphlets.

Population and household statistics used have been assembled from national census data from the following sources:

1901 to 1961 – A Vision of Britain through Time www.visionofbritain.org.uk

2001 – The Office for National Statistics www.neighbourhood.statistics.gov.uk

First Edition Published in 2009 by the Bottesford Community Heritage Project