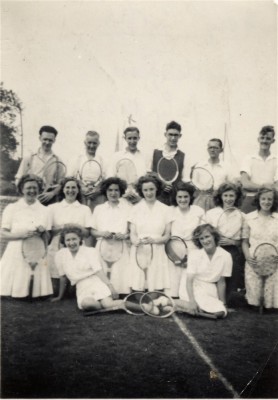 Group photograph of fifteen tennis players (6 men, 9 ladies) with their raquets at the tennis court which used to be located on Belvoir Road in Bottesford. The site was later taken over for housing. The picture was taken looking north, with the top of the church spire just visible in the distance. Beryl J Carter (now Beryl Smith) is the right hand of two ladies kneeling at the front, marked with a pencil cross; a gentleman in the back row is also marked in this way and may well be her brother.