You are here: Home>Tags>Archive>Bottesford Local History Archive>Beryl Smith's collection of photographs>Pharoah Hare with horse in the Bull Yard

Pharoah Hare with horse in the Bull Yard 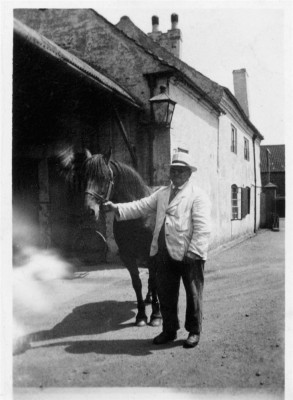 Mr Hare stands with his horse in the yard at the rear of the Bull Inn, Bottesford. The picture also shows part of the supports of the roof which used to cover the yard, beneath which Gouldings of Grantham held a thursday market.

It seems likely that Pharaoh Hare previously lived at Church Farm house at Swayfield. Church Farm, Swayfield was occupied by Eliza Hare from the 1880s. Among her several children were Albert Hare and his younger brother Pharaoh. Albert it appears took over the farm and remained there until the late 1930s. Pharoah moved out; but is recorded as owning other cottages in the village until the 1950s. (With thanks to Martin Pointer for this further information – 15/2/16).