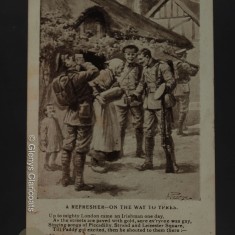 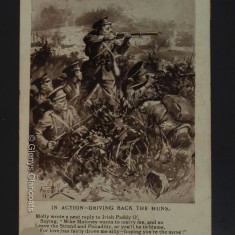 25 March 1915 (Front) IT'S A LONG LONG WAY FROM TIPPERARY In Action - Driving Back The Huns Molly wrote a neat reply to Irish Paddy O', Saying "Mike Maloney wants to marry me, and so Leave the Strand and Piccadilly, or you'll be to blame, For love has fairly drove me silly - hoping you're the same!"
(Glenys Claricoats) 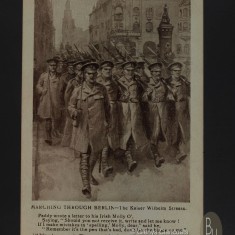 28 March 1915 (Front) MARCHING THROUGH BERLIN - The Kaiser Wilhelm Strasse Paddy wrote a letter to his Irish Molly O', Saying "Should you not receive it, write and let me know! If I make mistakes in 'spelling', Molly, dear," said he, "Remember it's the pen that's bad, don't lay the blame on me."
(Glenys Claricoats) 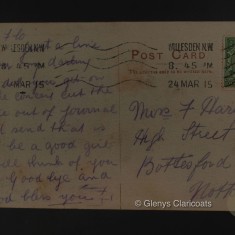 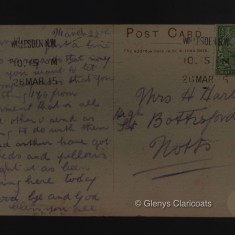 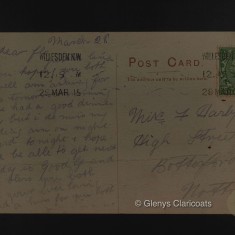 Harry Harby had enlisted in the previous month so the family was probably finding life rather strange in March 1915. Harry would have been in training in England prior to shipping to Egypt in late April and the postmarks indicate that on these dates he was in Willesden in north west London. He seems to have obtained a pack of postcards in a series headed “Its a long, long way from Tipperary” and writes twice to his daughter and once to his wife. Rose looks to be concerned about how much money she will have and whether the authorities will take issue in some way.