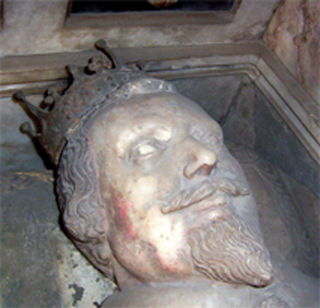 Roger Manners 5th Earl of Rutland (detail of his tomb) 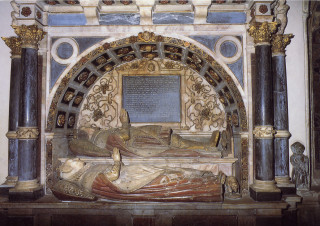 Roger Manners has one of the most interesting histories of all of the Earls of Rutland. Indeed he is the only one of the Earls to have been identified by some scholars as the real writer of Shakespeare’s plays! Although his brother Francis the 6th Earl has an established link with Shakespeare, having actually employed him, it is Roger who is suggested as a candidate for the authorship of the greatest of all English plays. However it should be stressed that this is very much a fringe position adopted by only a few scholars. It is one which is firmly rejected in the mainstream of Shakespearian studies, and it is not a view I personally support. Nonetheless it is I believe creditable to argue that if Roger Manners was not the playwright of the Globe Theatre he was on several occasions at least, a member of the audience.

Most of the supporters of the Rutland candidature base their arguments on the close links between Roger Manners, 5th Earl of Rutland, Robert Devereux 2nd Earl of Essex, and Henry Wriothesley 3rd Earl of Southampton. Their relationships were close and complex, and they had reverberations long after Robert Devereux’s execution after the failed fiasco of the Essex Rebellion. Below is a chronology of the course of relevant events:-

21 Feb 1587-8 succeeded as fifth Earl of Rutland, passing through London on his way to Cambridge, he had an interview with Queen Elizabeth

In 1590 his tutor, John Jegon, removed to Corpus Christi College, and among other of his pupils, Rutland went with him

Early in 1596 Sailed from Plymouth, and passed by way of Paris to Switzerland and Italy. Fellow classmate at Padua University with two Danish students called Rosencrantz & Guildenstern. In North Italy he had a dangerous illness

Jan 1598-9 The Earl of Essex given command of an English expeditionary force sent to Ireland, to fight a rebellion in Ulster led by O’Neil the Earl of Tyrone

March 1598-9 Fearing the power that Essex is gathering around himself, Queen Elizabeth forbids Roger Manners 5th Earl of Rutland from going to Ireland

19 March 1589-9 The astrologer and doctor Simon Foreman casts the Earl of Essex’s horoscope.

27 March 1599 Essex  leads his army as they march out of London, Simon Forman is in the cheering crowd watching the procession.

April 1599 Roger Manners travels to Belvoir Castle then on to Chester and slips out of England to join Essex in Ireland.

30 May 1599 Roger Manners knighted by Essex in Ireland

28 June 1599 Roger Manners returns to London after being summoned back by Queen, is in disfavour for disobeying her orders.

Sept 1599 Essex realised that the Irish campaign was a fiasco and concluded a private truce with the Earl of Tyrone.

28 Sept 1599 The Earl of Essex rides back overnight from Ireland. He bursts unannounced into Queen’s apartments in an attempt to explain his agreement with Tyrone. The Queen is angry both because he has seen her without her wig and makeup, and by the fact that she was frightened by the possibility of assassination and a coup.

28 Sept-1 Oct 1599 Roger Manners steward Thomas Scriven makes the following entres in his accounts:- Item, 28 September, my Lorde’s boatehier to Lambeth and back againe, xviijd.;…boatehire 1 October, for his Lordship and his men, and the play, and James his going to Lambeth to see Capten Whitlock, viijs.

The fact that the boats are being used for transport identifies the Playhouse as being in the Southwark area, south of the river, but tantalisingly, Screvin doesn’t make clear if the Earl is visiting the newly constructed Globe Theatre or its near neighbour, the Rose.

Oct 1599-June 1600 Essex placed under house arrest and his faction at court go into a kind of limbo waiting to see what will see what will happen next, It was reported by Rowland White in 1600 that Rutland and Southampton ‘“passaway the tyme in London merely in going to plays everyday”